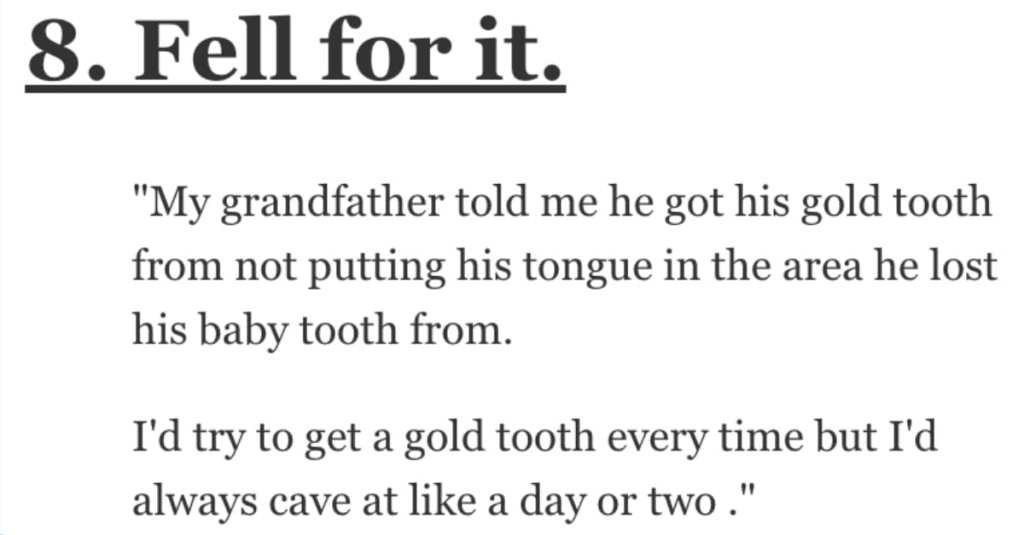 I still remember some of the dumb lies I believed growing up.

If you swallowed gum, it would get stuck in your stomach and you’d have to have it surgically removed. And then there were the fake stories about certain rock stars and actors and the incident with the gerbil…do you remember that one?

My point is, there are a ton of dumb lies floating around there and every generation has their own version of the old classics.

Folks took to AskReddit to discuss the dumb lies that folks out there believe.

Let’s check them out!

“That carrots help vision. It was WWII propaganda.

“…the British government—aided and abetted by Walt Disney—told Britons that eating carrots could sharpen their eyesight and help win the war…. Portraying carrots as a night vision-enhancing superfood had another benefit—hiding a secretive English radar technology from the Naz**.”

“The American dream of “If you go to college, work hard and study hard you can have a good job, great life and be happy”.

That’s not how reality works.

A lot of the times it’s a mixture of dumb luck, right place/right time and/or nepotism.”

3. How it really went down.

“Galileo was burned for saying the earth revolved around the sun.

He was actually excommunicated for mocking the pope…

A pope that was supportive of his work.”

“That the wind turbines that failed in Texas this winter are proof that wind power is not reliable.

Fox viewers believe that to this day.”

“That you need to drink 8 glasses of water a day.

I cant even drink 8 glasses of anything else.”

“Growing up my mom always told me that i have to eat two bananas together because if I eat just one the banana won’t give me any potassium.

It takes two bananas to work together to activate the potassium release.

“You have to go to college if you want a good paying job, otherwise you’ll be working as a garbage man.

“My grandfather told me he got his gold tooth from not putting his tongue in the area he lost his baby tooth from.

I’d try to get a gold tooth every time but I’d always cave at like a day or two.”

“That your tongue has 5 taste ‘bud’ centers, each in different areas of the tongue.

They made us do a taste test in jr high.

I couldn’t taste what the hell they were talking about.

Dumb enough to get a primetime tv show called Finding Bigfoot, too.”

“When I was in elementary school, we were always told that the fire alarms would squirt ink on your hands if you pulled them.

Fast forward to me as a teacher in my 20s. A kid pulled the fire alarm. The principal mentioned pulling video footage to find out who did it. I told my principal “just look for the kid with ink on their hands!”

My principal was confused at my comment until I gave more detail. It was only then that I realized I still believed a lie told in elementary school!”

“That there are hot singles in my area looking to meet me.”

“Unions are bad for workers.

My job is unionized and we get 4 breaks, $22/hr, basically f**king free health care (a guy got 4 X-rays and paid nothing) and the company is still profitable.

In the comments, tell us about the dumbest lie that YOU ever believed.