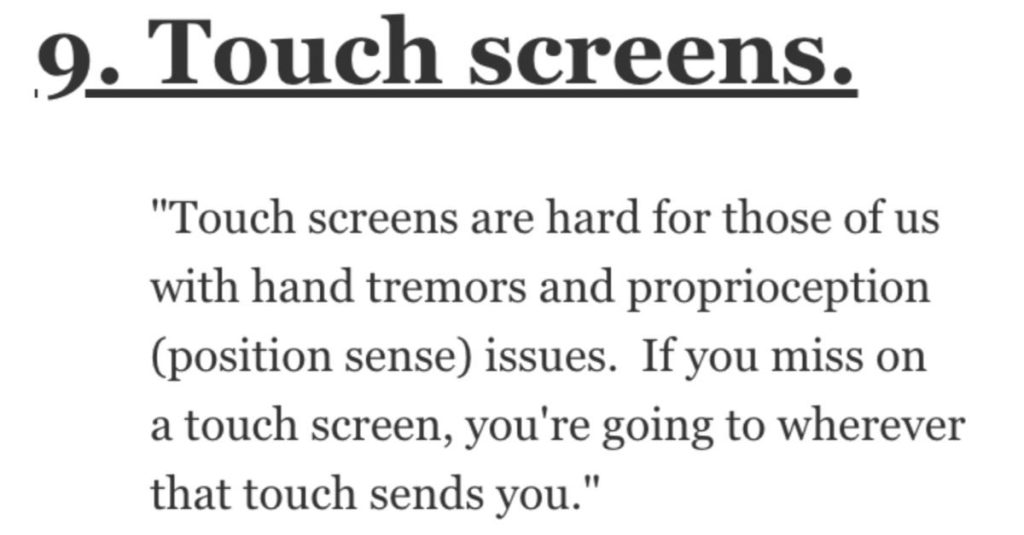 If you’re not disabled, you have no idea what kinds of invisible battles people who do are dealing with.

And those of us who don’t have a disability are going to get a lesson today in some of the things these folks have to deal with that we don’t know about.

Take a look at the responses below.

“My dad is blind.

Lots of home appliances have been going from physical knobs and buttons with clear distinct functions to touch screen panels, some without even any type of sound or tactile cue to let the person know.”

It may not be obvious but they can be a constant issue.

“The lack of energy to do even the most mundane things.

Feeling bummed out and in pain a lot.”

“Showering is so hard.

I have to psych myself up to do it and plan for lots of downtime after and if I do skip a shower then I’m paranoid that I’m rank.

All of which is super depressing, too.”

I don’t make enough to make ends meet, but I make too much for disability assistance.

The system is messed up.”

“Just the exhaustion from having to deal with your limitations, both physically and mentally.

Doing anything always takes extra effort, and usually requires more resting to feel up to doing whatever else needs to be done.

As a disabled person who works, I usually only have enough energy to make dinner when I get home. So chores tend to pile up, and some jobs just never get done because it requires more energy than I have in one day, unless I get someone else to do it for me.”

“The fact that it’s hard to keep friends because you have to cancel last minute so often.

But my body said no. Only the best of friends stick around after years of this.”

“Not (always) being able to tell when an illness or injury is bad enough to need medical attention.

When “nauseous, fatigued, and in a noticeable amount of pain” is just your constant state of being, it’s not easy to know when something worse might be going on or if you’re just having a bad flare-up.”

“Touch screens are hard for those of us with hand tremors and proprioception (position sense) issues.

If you miss on a touch screen, you’re going to wherever that touch sends you.”

So many people get mad, like I’m not disabled enough to be using whatever help I need. But it takes me so much longer to recover from overexertion. Kind of makes me want to deposit people in the middle of the Pacific Ocean.

Just because they technically could tread water for three days doesn’t mean they should have to or that they would be in any condition to go to work the next day.”

“The heinous need to be near a bathroom at all times.

You wouldn’t think, but so many places don’t have bathrooms and it really limits where you can go and how you socialize.

12. Enough with the advice.

I literally spend all of my time working on managing my illness, I don’t need you telling me to see your magic crystal infrared naturopath because a) it won’t work, b) I don’t have the energy anyway, c) I’m spending all my time, money and energy on pursuing scientific interventions.

I realise people think they’re helping, but the best help is listening.”

“I have mild cerebral palsy but look pretty normal. I do limp when walking.

The big struggle was getting them to understand its not an injury when they insisted on helping.”

“Urinary incontinence and the cost associated with it. A vast people with my condition struggle with incontinence, but we don’t talk about it!

I’ve had incontinence since I was 12 years old. I was so embarrassed that I didn’t tell anyone for years. I had to buy diapers behind my parents back. I also always smelled really bad.

The diapers would leak or the pads I used would fall off, so I would just leak urine all the time. It was so embarrassing. I would have to change my pants multiple times a day to not smell.

Well, I consulted a doctor and there’s nothing they can do for me. I’m 22 now and have lost almost complete control of my bladder. People don’t understand that leaks are inevitable and happen occasionally. I get absolutely roasted for having leaks. My friends still make comments to me when I buy diapers and thick urinary pads, despite knowing my condition. People only accept disability until it’s embarrassing.

Not to mention the cost. Im a broke 22 year old college student living on my own in LA. 10 diapers from the only brand that won’t leak are $28. Think about how many times you use the bathroom a day…. Yeah. That’s just ONE cost of my disability. There’s so many more.”

Do you have anything to add to this conversation?