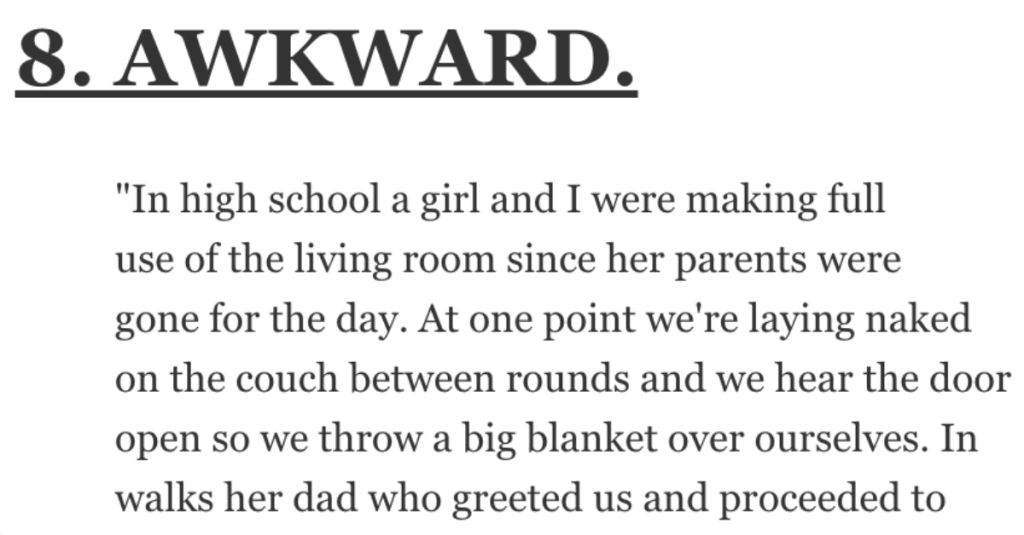 You never get a second chance to make a first impression.

You know you’ve heard that saying before. And it exists because it’s 100% true.

And this is especially true when it comes to meeting a girl’s father for the first time. Yikes!

AskReddit users went on the record and shared their worst “meeting the dad” stories. Let’s take a look.

“Had a massive sh*t on hold. We didn’t know he was home.

So we got in and I dashed to the toilet. Ten minutes later I had destroyed and quarantined the bathroom. When I went out he sees me and comes to greet. I tried to close the door to lock the odor in but I failed.

The smell was really bad. I saw his right eye tear up a little.”

2. You’ve been sneaking in, haven’t you?

“When you’re meeeting the dad for the first time, but the dog comes up to you and is super friendly because he already knows you…

3. Get the hell outta there!

“I had been dating this girl for about 3-4 months and it was time to meet her family. We made arrangements and went over for dinner.

He was nothing short of a f*cking PRISONER; I still refer to him as the Prisoner.

The entire night he barely spoke, and when he did it was only after being directly prompted by his wife or daughters, and it was always one-word answers.

The entire dinner was them making jokes at his expense, making fun of him while simultaneously spilling the beans on intimate, personal details of his life.

His wife treated him with absolute contempt and disdain, which was translated into how his daughters treated him as well. The only living thing in that house that had any affection for him was the cat.

This man spent 30 years working his *ss off as a civil engineer to raise a family (his wife never worked a day in her life, before or after him). He put two daughters through college, paid their f*cking rent, on top of paying for their cars and basically everything else.

And they treated him like a malfunctioning robot butler.

His eyes were completely dead, like a lion who’s been in the zoo too long. It scared the f*cking sh*t out of me, so I broke up with her about a week later. It was like a visit from the Ghost of Christmas Future.”

“I had a Filipino girlfriend in college.

Decided to meet the parents. I drove around 3 hrs to meet them, and even brought flowers and stuff, when for the first time in their life, they decide to practice a tradition of “rejecting the bf 3 times before accepting him.”

The point is that if you REALLY want their daughter, you’ll try as many times as it takes, and since they had never done it before, my gf didn’t think about warning me. I was pretty annoyed when they tossed my flowers right into the garbage.”

“My family owned an auto service station which I worked at while in high school. One day we have a gentleman come in and ask for brake fluid- we will call him John. John buy the brake fluid and leaves.

A month or so later we get a letter from his attorney seeking damages because we supposedly put brake fluid in his transmission. Our lawyer wrote their lawyer and that’s the last we heard.

We were a full service station and I would pump gas for people, check their fluid levels, add fluids if necessary etc. we had a woman who came by a couple times a month – Mary. One day Mary comes through and I added a quart of oil to her car, an older Mercedes.

She comes back through that evening with oil all over the front of the car and accuses me of not replacing the oil filler cap, which I couldn’t deny. Might have very well done that. I took my beating on it, cleaned the car listened to her threaten my family, etc. sometimes you learn the hard way.

About a year after both of these incidents, I meet a girl at a friends house. We start talking and set up a date. I pull up in her drive way – that green Mercedes looks familiar. Real familiar. I go to the door and the girl greets me. I walk into the living room and there’s Mary watching tv. I look over at her dad and he looks up from a magazine. It’s John. Well sh*t….

I went blank there for a min. I think I said hi and exchanged small talk. I’m not absolutely certain, I only know that I wanted to leave. I dated this girl for a few months and her parents were civil. The incidents above never came up.”

“Was invited over to watch Pride and Prejudice with a girl I liked. (Why that movie? idfk) We were about 19. She stayed with her dad.

Met dad and he did typical dad things. Fast forward a few hours and we are in the dark living room on the couch watching the movie. Her legs were on my lap and I was rubbing them when I see a glint to my left by the hallway.

Her dad is standing in his boxers holding a big kitchen knife. “Everything alright in there Jen?” “yeah dad” She didn’t even see him and never believed me when I told her what happened.”

“Sitting on the couch with my Jewish now ex-wife’s dad the first night I met the parents when I heard her mother from the kitchen:

“Not only is he CATHOLIC…. he’s IRISH…. those are the WORST KIND!”

That was fairly awkward.”

“In high school a girl and I were making full use of the living room since her parents were gone for the day.

At one point we’re laying naked on the couch between rounds and we hear the door open so we throw a big blanket over ourselves.

In walks her dad who greeted us and proceeded to watch the movie we had on as background noise with us for another hour while we’re naked under a blanket on the other couch.”

“Showed up at her house unexpectedly at 11 pm. He was in bed.

Once I was let in by her brother, he went and woke dad up to meet me. 2/10 experience.

Don’t wake a 250 lb Puerto Rican as a first meeting while dating his youngest daughter.”

“The dad was an ex-Army Ranger.

He made me do yard work while the girl stayed inside. He started a fire to burn trimmed tree branches and started the “so you like my daughter” speech.

“Girl’s father was in a wheel chair, but was built very well. He obviously lifted as much as he could from his confines. Girlfriend warned me he previously tried to break a guy’s hand upon meeting him and shaking his hand.

So, I went to meet him. He stuck his hand out to shake mine. I didn’t hesitate; I shook his hand. He looked at his daughter as if to say “if you weren’t here, I’d totally snatch his hand off his wrist.”

Then he started giving me “the talk” about dating his daughter. He ended it with telling me about his .45 in a shelf.

I really, really wanted to answer with “this shelf, right next to me, but across the room from you?” but I decided against it.

Apparently while we were out, her parents ransacked her bedroom and found our notes that we had written back and forth. I wrote words like “sh*t” and “*ss,” so they forbade her from seeing me again.”

“The dad was a huge guy probably 6’5″ atleast and super ripped.

When I first met him he was wearing no shirt and basketball shorts. He introduced himself as the leader of the local Hells Angel’s chapter and said if any one in town starts anything with you guys tell them you are with me. He was actually a nice guy most of the time unless he was drunk.

I’ve heard stories before meeting him so when I saw him it was scary. He actually was really nice and made everyone spaghetti for dinner.”

13. Confessions of a teenage dweeb.

“As a teenage dweeb, I dated this very sweet girl during my senior year of high school for a few months.

She finally asked me over to have dinner at her family’s house to kinda show the family that we’re taking our relationship seriously. I had never met her parents before nor had I even done a “meet the parents” before, so I was a little freaked out about how the introduction would go.

We head over together to her house that evening and walk into the kitchen. Her mom greets us and seems delighted to meet me, which puts me in a good mood. Then she runs upstairs to grab her dad, who I can hear moaning and groaning about coming down.

I didn’t make out all of what they said, but I heard him distinctly say “I’m not introducing myself to a 17 year old dipsh*t who thinks he can touch my daughter”. Oof, okay. My girlfriend and I awkwardly stand around pretending we’re not hearing this stuff, when we hear a “Fine!” and the parents both walk back down the stairs.

Her dad totally reluctantly, in this over-the-top way extends his hand and says “You’re Readycent?”. Literally just as I reach my hand out to say yes, I get a nosebleed. He stands there for a moment, mutters “yup” and walks straight out the back door to his woodshop, where he stayed for the rest of the night.

F*ck that over-dramatic *sshole, I didn’t even do anything wrong yet.”

“The first time I was at my (now ex-)gf’s place, we each took a piece of fruit when she showed me around.

When I finished my banana, I went to throw it away downstairs. Their garbage can was below the sink, so I bent down, and it made quite some noise when I opened it.

From the other side of the room comes an angry “Hey hey! What do you think you’re doing there?!”

Then he starts laughing “Oh, haha, I thought it was the dog going through the thrash, I couldn’t see you”.

They made fun of that for a long time.”

Oh boy, those make me cringe…

Have you ever had any painful “meet the parents” moments?

If so, please tell us your stories in the comments!