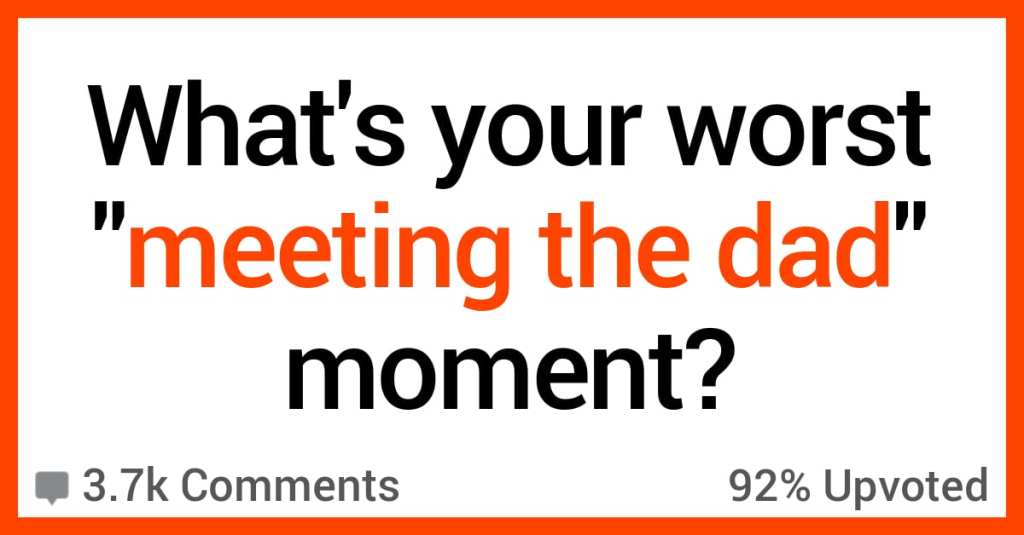 It’s never, ever fun to meet a girl’s father for the first time, no matter how old you are.

For some reason, those butterflies are there whether you’re 16 or 35.

Luckily, I’ve never had any terrible experiences in that department, but plenty of people out there have. You better believe it!

Let’s take a look at what folks on AskReddit had to say about this.

“The first time I met my GF’s dad I tried to shake his hand and introduce myself all serious and respectful like, he grabbed my hand and half-shook it without even ONCE looking at me. I thought he was the world’s biggest d*ck.

6 years later I’m engaged to his daughter and he and I are pretty d*mn close. He’s paying for me to go to Disney World next year with him and his family for his older kid’s wedding.”

“In 2005 I took a train to Connecticut to meet my college girlfriend’s family.

She picked me up from the train station and when we got to the house, I had to pee really bad. (Trip from philly to Hartford was like 4 hours) so I figured I’d run to the potty before I would meet the family.

She told me to use the bathroom upstairs bc they were renovating the downstairs one. Open the door: there’s her dad po*ping.”

“When my husband met my father, we’d been invited to drink at a bar in my hometown. I knew what my father was planning so I tried to stick close to hubby most of the night.

What I didn’t know was that my cousins (all +30 years of age) were also there and had been told by my father that I’d brought along my boyfriend. My mother facilitated it by asking him to get her a drink at the bar while I was in the loo.

He was swiftly pulled aside and bullied by four – yes, FOUR – of my male family members. They threatened to break his spine and both legs if they saw something they didn’t like.”

After a few weeks of dating she invited me to her house for dinner, to meet her parents. Her Mom and brother were really awesome. Her Dad, though, essentially put me in a corner and started going off on me about how I’m some white boy that’s only with his daughter so I could put another “notch in my belt” and that us white boys only like banging black chicks for bragging rights.

Everybody, myself included, thought he was just joking at first, but soon their mouths were hanging open and it was pretty apparent that they were super embarrassed. This went on for about ten minutes.

At the time I was running a gun range, so his family stopped him when he said “I bet you just sit at home waiting for some n*gger to break in, just so you can shoot him.”

It was all so odd. Completely unprovoked. He was the only *sshole out of an entire family that had been one of the coolest I’ve met. Our relationship dive bombed after that.”

“When I first met my SO’s parents, her dad was outside working on his garden. I walked by and said, “Hey, how are the tomatoes coming along?”

It traumatized me for awhile but now we get along fantastically. My SO and I still joke about that though.”

“Her family was having a party. This was a party with a bunch of “rednecks” for lack of a better word.

I was 16 or 17 at the time so I wasn’t drinking, but all the adults there were nice and toasted. There were like 8 puppies running around us. Her dad pulls out a gun and starts showing it off. A few minutes later he’s talking all sweet to this puppy and gets it to run towards him. As it is running towards him he shoots the puppy in the head.

I immediately start flipping out on this guy and cussing him out. If he wasn’t holding a gun I don’t know what I would do. So I get in my car and I tell my girlfriend I’m too pissed/sad to be around anybody. I called the sheriff and told them the story.

They said they couldn’t do anything about it because we were on private property. Then I tell them they are wasted and shooting guns. He ended up going to jail that night. A few days later he tells me I can’t date his daughter anymore and it was my fault he went to jail.

A few years ago this piece of sh*t died from lung cancer. It’s been 10 years and it still hurts to think about that puppy.”

“My ex’s dad was staying in a mental hospital when I started dating her. Which meant we had the house to ourselves because the mother wasn’t around.

So one night after s*x, I went downstairs to the kitchen for a snack. When suddenly, this fat naked man asks me who the hell I am and why I’m naked in his kitchen.

Turns out he was the dad. He’d been discharged from the hospital, came home all quiet like, somehow got in without either of us hearing it, and wanted a quick naked snack.

We shook awkward hands, made fun of each other’s fat bellies and went on with our lives.”

8. How it goes down in Finland.

“I have been dating this girl for nearly a year now, she is Finnish and when I visited for Christmas last year the whole family celebrates the day before, I arrived on the 23rd.

It’s traditional for Finnish family’s to have a sauna before the meal, so the women go first and then start to prepare the meal once they come out, once out the males then sit in the sauna till the meal is ready.

If you don’t know anything about Finnish saunas it’s normal for everyone to be naked (I’m sure you can guess where this is going) and girlfriend asks across the room if I’m fine with being naked and before I can reply her dad from the next room bellows out “of course he is” so 20 mins later I’m sat in the sauna naked with most of the males in her immediate family.

Everyone is talking and it comes to a silence so the father addresses it with asking me how I met his daughter. I have never had such a nervous conversation in my life!”

“Met my girlfriend’s Dad after a few months of dating.

Both parents were cool until later in the night and a few bottles of wine later. I got the impression he thought his daughter was too good for me and I was temporary, and kept making jokes about my height (I’m 5’9″, kinda average).

I showed him and married her a few years later. We’re cool now.”

“17 years old meeting my girlfriend’s large police officer step dad. She gave me a love bite the day before and he spots it as I’m leaving the house. He asks me what it is and trying to laugh it off I say “Oh, I fell down the stairs haha”.

His response was, “You bring one of those into my house again and you f*cking will be falling down the stairs”

Still not sure if he was joking or not… probably not.”

“As we were getting out of the car, her parents waiting on the porch to meet me for the first time, she tells me that she is 15, not 18.

“My first girlfriend’s father spent a full hour showing me his sword collection before finally looking me straight in the eye and saying ‘I think it’s clear what I mean to say.’

Legit had only gone over to play monopoly with her (this was 7th grade) and was so mortified I came up with a fake reason to leave and bounced.”

“I met this Dutch girl in London. A few weeks after we fly to Amsterdam to meet the parents .

We all sat in their flat nodding and smiling . The mum had made an apple pie as big as the coffee table . Neither of the parents could speak English and it was all very uncomfortable. Eight months later we got married.

My new father in law made a speech in almost perfect English. When I asked him how it was possible he said ‘ I knew you were soulmates and I wanted to be able to talk to my new family ‘.”

Okay, amigos, now we want to hear from you.

Have you ever had any bad or uncomfortable experiences when you’ve had to meet your significant other’s parents?

If so, please tell us your stories in the comments. Gracias!