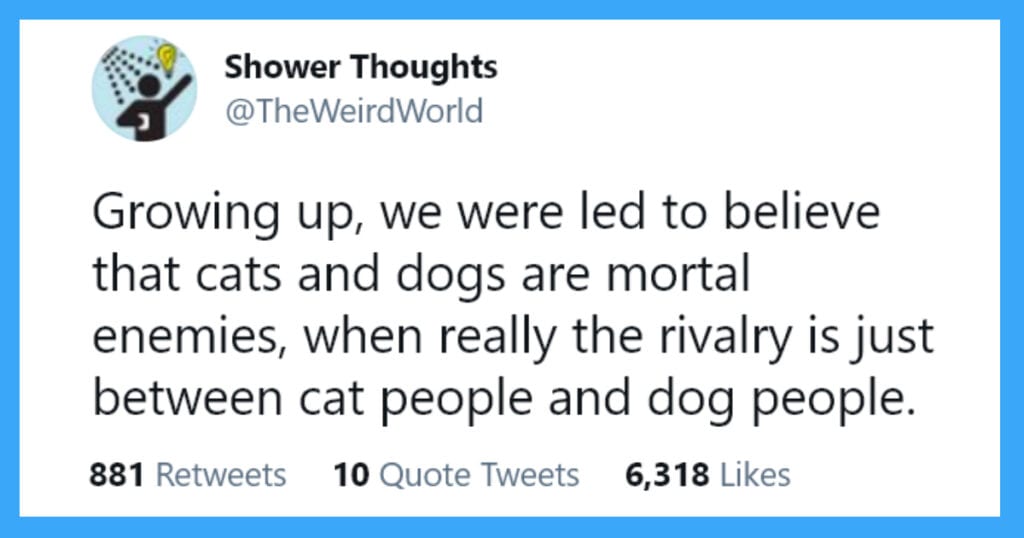 It seems pretty clear to people who study such things how dogs and humans became so close. Long ago, a symbiotic relationship formed between humans and wolves. We provided them food and shelter, they provided us protection and companionship. The love has grown ever since.

How there came to be domesticated cats isn’t quite as clear. It really doesn’t make sense by most accounts – they’re largely solitary and independant creatures without much of a pack mentality.

And yet, once you love ’em, you’re in for life.

How can we settle the tensions that arise from these two camps? Through tweets, I reckon.

Growing up, we were led to believe that cats and dogs are mortal enemies, when really the rivalry is just between cat people and dog people.

people who claim cats aren't affectionate or social, can you let my cat know because all she wants to do is be social 24/7 and boy do i mean all 24 hours

There needs to be a Secretary of Pets or something.

This is called bringing the country together:
Cat people AND rescue dog people.
I approve.

cat people: I like cats more but dogs are cool

dog people: cats are the DEVIL !!! I had a cat once and it ATE MY GRANDMA

Gotta rescue ’em against their will half the time.

Dog people: Fido is the goodest boy in the world and I love him.

Cat people: Felix is a trash eating little hellspawn who sits on my face while sleep and Iove him.

My main man would never turn me in.

Gotta keep us in our place.

Dogs are the pets of the common man who likes to feel superior to other species, demanding their obedience.

Cats are the pets of the humble man who, dare he ever develop an ego, will be swiftly reminded of his lowly place in this world by a superior, dominant animal. https://t.co/0wL1dIFtk1

To be fair, other creatures likely think the same of us.

I am completely a dog person, but I do love the way cats give absolutely no fucks about anybody or anything else.

Cat people: “People who don’t like cats only hate them because they’re scared of their power & fear their superior intelligence. They’re scared of an animal with independence unlike a fucking servile pathetic dog.”

Cat: *gets tangled in the blind* x

5. The choice is yours

"so are you more of a cat person or a dog person"
how dare you make me choose. how dare you. this date is over and i'm calling the police

On average, cat owners tend to be more intelligent than dog owners, according to researchers from Carroll University.

The power dynamics are pretty clear.

Dogs have owners, cats have staff.

Whatever floats your boat.

[dog people] here’s my angel Rex! he knows 19 tricks & brings me my slippers every morning!
[cat people] this is Princess Murder who lets me live with her.she pees on everything i love. her interests include screaming & eating bugs. when she asks me to kill for her i will say yes

There’s no need to feel down!

I guess those probably didn’t so much settle anything as stir up the fight…oh well.

Are you a cat person or a dog person?

Tell us where you stand in the comments.