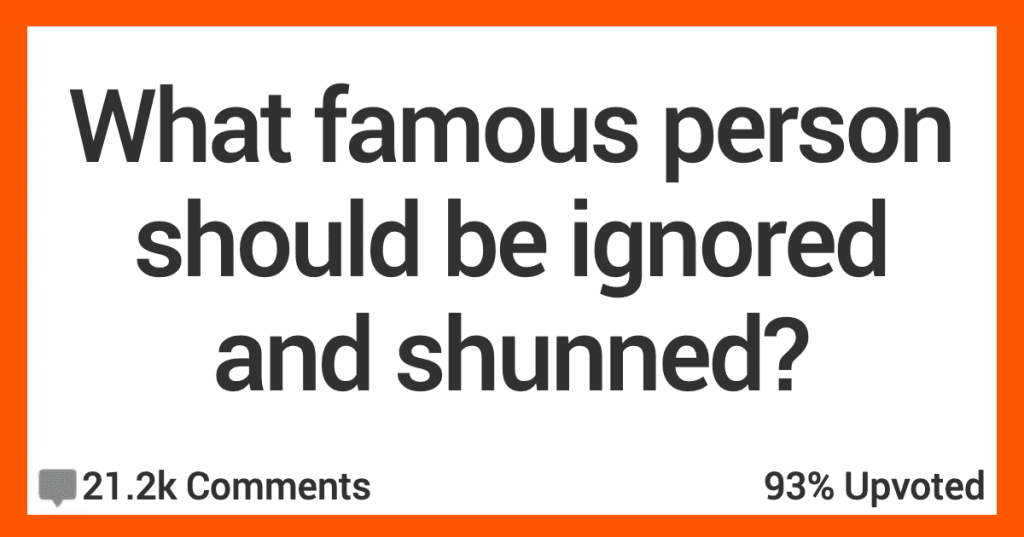 This is gonna be fun!

Because I think we can all agree that there are a whole lot of famous people that need to just GO AWAY.

And these AskReddit users were nice enough to share their thoughts on this subject.

When I was a kid, I used to watch the last few minutes of his show before Pokemon came on. He once did a sermon saying it’s sinful to tell your children that you’re proud of them because pride is a sin.

Even back then, I thought it was ridiculous that he couldn’t discern between two definitions of pride. Probably intentional on his part regardless. And he only got more abhorrent in the years afterwards.”

“They have to cancel Eugenia Cooney.

She is k**ling herself on camera and that makes her a role model for plenty of anorectic 12 year old fangirls.”

He is a predator and a creep, its infuriating that he’s not in jail. He admitted to being attracted to young men (teens) and was exposed by one of his victims trying to get the kid to send him nudes.

Multiple other kids came out with evidence exposing him too.”

“In the spirit of being different from some of the more obvious answers – R Kelly.

Thought he was already in obscurity but apparently he just released a new album.

Only heard one line from it, what I think is safe to say the most notable one…, and it just reaffirms he can p**s all the way off.”

I’ll never understand why he’s been given a pass by the music community and fans.”

Natalie Portman, Wes Anderson, Harrison Ford, Martin Scorsese, Tilda Swinton, Emma Thompson and (less surprising) Harvey Weinstein and Woody Allen all want him pardoned so that he can come back to Hollywood and be treated as a hero.

I don’t understand how some of these people were big Me Too supporters but also supported Polanski at the same time.”

Been waiting for his reckoning and we might finally have it.”

Rumor is he is way too s**ually aggressive and has a proclivity for 16/17 year olds.”

Dude has been grooming young kids even though it’s been clearly revealed on accident by his victims, on the record.

She’s hands down the worst human being I’ve ever met. She’s well known for ruining careers and essentially blacklisting people in the industry. My dad worked with her on a project and she would publicly berate people for the smallest mistakes.

She’s a well known picky eater and she expects every random craft service person to know that and flips out when they don’t. Pray you never meet this woman.”

I don’t consume any of their media I just know they’re f**king idiots that have way too many subscribers.”

“Donald Trump and any of his litter.

Any politician who’s there for the tweets instead of making a better country, like Taylor Greene, Boebert or Ted Cruz.”

This man is kept relevant by people who despise him and wish he’d go away.

Stop talking about him. Stop sharing his videos. Stop getting upset about his dumb little opinions. It’s what’s keeping that piece of s**t alive.”