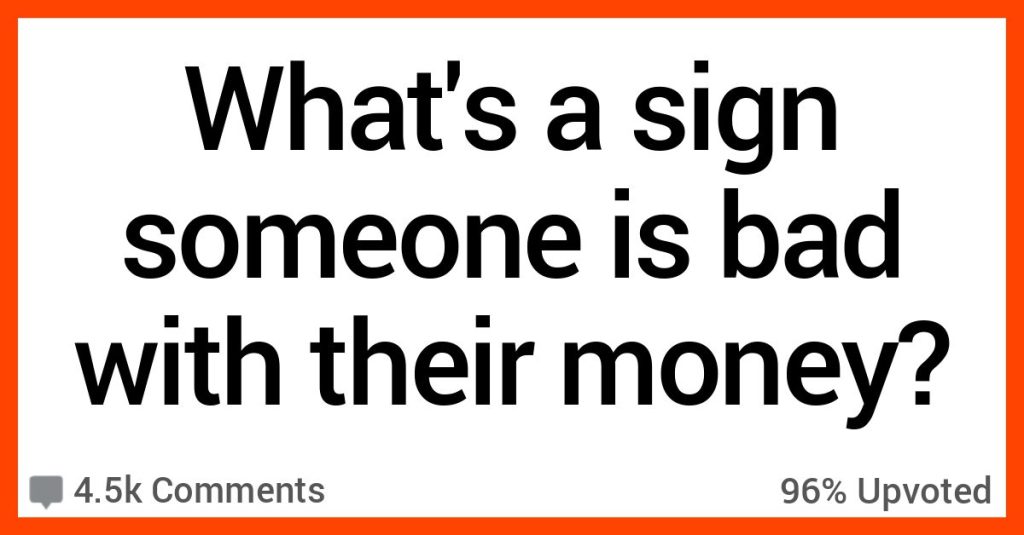 I think it’s safe to say that most of us could be at least a little more careful with our money, but some people…ouch…they need to take a class or their friends need to do an intervention or something, because it is UGLY.

And I’m sure you know at least one person like this, right?

Folks on AskReddit talked about how they can tell someone is bad with their money.

Had an uncle who squandered his life savings convinced he was gonna hit it big any day.

Lotteries are legal, softcore gambling, and can be addictive when you have too much hope.”

“When they say things like “Money comes and goes”.

My MIL’s favorite. Had to move back to her home country because she couldn’t retire here on her social security.

After having a 6 figure income for over 10 years. Now the dollar is dropping….”

Why be fiscally responsible when you can spend 10k on Yeezys?”

“Has nicer stuff than anyone you know.

5. Better get that under control.

“I know a kid whos parents got him his own credit card when he was 17 to help him ‘build his credit.’ It had a $10,000 limit that he maxed out in just a few short months from buying snacks & cigarettes at the gas stations.

He then turned 18 and just opened up a fresh new credit card and continued the process. It was all fun and games until one day he woke up and was $20,000+ in debt at 19 years old from just buying himself and his buddies snacks every day.”

“They make a great income but are still loaded down in debt.

I know a doctor that lives paycheque to paycheque.

“Expensive car like a BMW or decked out fully-loaded truck with the lift kit and everything, but they’re living in a c**ppy apartment or a house where the yard is a mess, fence falling over, etc.”

“They are involved in multi-level marketing schemes, and when asked by friends why you need to pay into such schemes, they say “well, you need to spend money to make money.””

“When you buy a meal in a restaurant and they start talking about how much money you’ve both saved by eating there instead of cooking at home, because “it’s so cheap here”.”

“I know a guy who lived in a 2 bedroom apartment with 3 guys for a few years.

Then he bought a Tesla Model X, new.

Told me he was saving up for a house. He finally bought his house, few weeks ago. It was 40k in Gary, Indiana.

His job? He drives Lyft full-time.”

“People that publicly complain about their bills. Not only are they broadcasting that they don’t pay their bills, but they’re asking for, at the very least, sympathy.

One example: I overheard a woman saying her phone bill was too expensive for that month, but she was in an expensive Japanese restaurant where meals go for $30 plus dollars for one person.

Fairly certain the group of people she was with picked up her bill.”

“I had a friend who was always complaining he was broke.

His car was broken said he couldn’t afford to fix the 600 dollar repair bill and was going to lose his job because he couldn’t get to work. 3 days later posted on facebook how he just got the brand new Xbox(it had just come out that week).

I asked if he got his car fixed and he blocked me.”

14. Living above your means.

“Living check to check when you make a decent salary. That means you’re spending more than you make.

At lastly, if your car payment is half your paycheck then you’ve got a car that’s too expensive for you.”

How do you think you can tell someone is bad with their money?