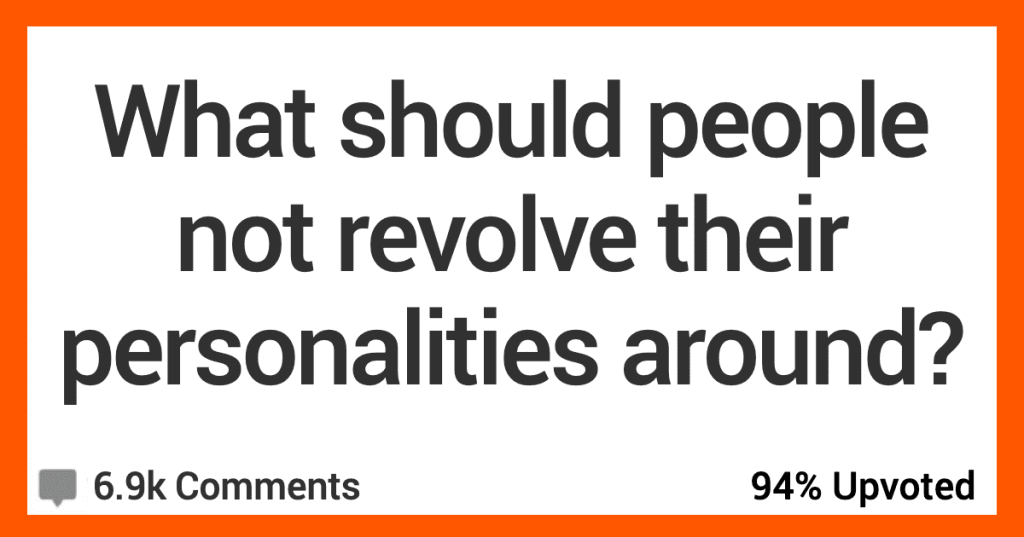 Come on, get a personality!

No one ever wants to hear that statement, but the fact is that a lot of people out there don’t have much of a personality at all OR they only focus on one thing.

So what do people need to stop revolving their personalities around?

The tend of being dumb and wilfully ignorant…

Why is that being glorified?”

“People who identify as a**holes.

i have a friend like this on FB. All his posts are about how he’s “such an a**hole but tells it like it is” or how scared people should be if they p**s him off.

I keep following for the cringe humor.”

“Having been in the military.

And I say this as someone who spent 24 years in the military.

It’s just a part of your life, not your whole life.”

I partake in both on occasion but, Jesus…”

“As a nurse, I have to say it would be being a nurse.

But seriously this is something I’ve struggled with as well. It’s just that the schooling was so d**n brutal all I did was study 24/7 for over 4 years. I dropped all my hobbies, and never went out.

So when I was in the program and after I finished it felt like I was unable to talk to people about normal crap. Been working on trying to fix that since I finished schooling.”

My friend is married to a woman who is obsessed with Mickey Mouse. I don’t get it. Like what you like, I guess, but it’s just something that stands out about her.

She must have other traits, but after several years, it’s the one that stands out.”

I know plenty of actual farmers who don’t act like a character out of a Toby Keith song.”

If you were empathetic – or simply a somewhat decent person – you would prove that by doing, not by saying.

I find people who say they’re “empaths” are usually shallow, manipulative, and narcissistic jerks who want to label themselves as an excuse for being an a-hole.”

“S**uality. Who you love isn’t your personality.

When I’m watching a baking show and the contestant regularly says “well as a gay/lesbian/bi ….. I choose chocolate”.

Why is that relevant to what you’re baking?”

“I’m surprised it’s not near the top, but their car.

I’m looking at you, Tesla owners.”

“Being in a relationship.

To the point where people are literally miserable and de-value themselves if their not in a relationship.

It teaches them to stick with relationships they know are bad or not real just to avoid being single, and they never really work on their true selves, as an individual human being.”

“Defining yourself by introversion and extraversion. It’s actually not technically the big overarching personality trait everyone thinks it is.

For instance, I love socializing and having fun with people and can be loud and bold, but I require alone time to recharge my battery and get my energy back.

My boyfriend is the opposite. Socially pretty quiet and laid back, but he needs to be around his friends and people to feel energized.

So yeah, being social and chatty doesn’t necessarily equate with extraversion and being quiet and shy doesn’t equate with introversion.”

Every second day she’ll send out photos of the animal like “isn’t he the cutest thing” and it’s starting to feel like manipulation at this point to constantly keep complimenting it. I get it, I have Guinea pigs, I love them to d**th but I don’t expect everyone else be as crazy about them as I am. It gets tiring.”

“I’ve said it before, and I’ll say it again, people that refer to themselves as alpha males need to be punched in the face.

It’s a corrective measure meant for their own good. There are several lessons in life I would have learned faster if someone punched me in the face.”