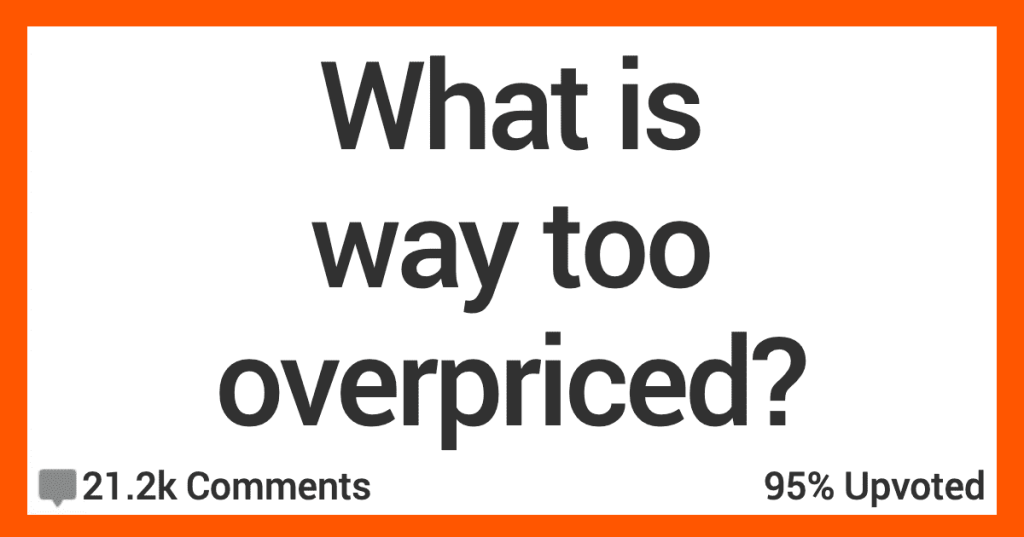 15 People Talk About What They Think Is Way Too Overpriced

Well, I guess it’s safe to say that pretty much EVERYTHING is overpriced right now…

Because, you know, inflation and all that.

But still, we’re going to hear from AskReddit users about what they think is WAY TOO overpriced.

I mean, at least it’s not something I need to use regularly, but those things are SO expensive.

I’m just trying to not die if I accidentally eat a peanut. Thankfully I found a much cheaper alternative, but they’re hiking their prices now too.”

Next printer you need, go laser.

Definitely cheaper in the long run.”

Don’t worry! You can sell them back at the end of the class!

Well, some of them you can…for 1% of what you paid for them.”

I have a cr**py high deductible plan and pay $220 a month for something I need to breathe.”

Metallica announced a tour recently and the tix my friends got were $260 before fees. There were then $80 in fees. Running a ticket website must be the easiest business ever.

A lot of the time you can’t even buy physical tickets for a concert at the venue anymore because these sites get exclusive deals with bands.

“Hummus. Seems like everywhere in the US, a small tub of hummus is like $5 or more and marketed like it’s some kind of exotic, bougie foreign condiment.

Dude, hummus costs nothing to make, I would almost wager it’s cheaper to make than ketchup. And it takes almost no time. You pretty much throw shit in a blender and you’re done. I had some friends over, and one of my friends didn’t believe me.

I walked into the kitchen and 10 mins later walked out with a massive bowl of hummus that just about everyone agreed was the best hummus they’d ever had (because they’d only ever had store bought crap).

It’s super cheap, super easy, and I promise you, your homemade hummus will likely taste better than that Sabra bulls**t.”

“Everything scalpers have gotten their hands on.

Tuition, books (which they change each semester and shockingly are written by the teacher requiring that book), parking……”

“Eyeglasses. Because of a blatant monopoly.

“Luxottica controls 80% of the major brands in the $28 billion global eyeglasses industry….” (Forbes).”

“For the life of me, I cannot with out why suitcases are so expensive.

They’re just plastic shells, a zip and some wheels, yet they sell for hundreds.”

“Anything with the word “wedding” attached; photographer, cake, etc

Want a multi tiered cake? No problem, that’ll be $60. Wait… you said it’s for a wedding?

“I admitted myself to a psychiatric hospital once. I don’t know why, but I was under the impression that it was free.

If you’ve ever watch Pharmabro then you’d know. I was born with a disease (cystinuria) that only one medication can treat (Thiola). 10 years ago they charged $1.50 a pill until some hedge fund manager bought the company and drove the price to $30 a pill just because he wanted more money.

I take 3 a day, let alone the specialists and procedures I go through so my medical expenses are like 50-100k a year. I get Medicaid so it isn’t a big deal but if I go back to work I’ll lose Medicaid and I’ll have to come out of pocket for that s**t.

It’s literally too expensive for me to work if I want to survive because some rich dude wants to get richer and make people with my disease pay 3k a month JUST FOR SOME PILLS.”

Paying a small fortune just to be able read this thread and use my Reddit on my phone.”