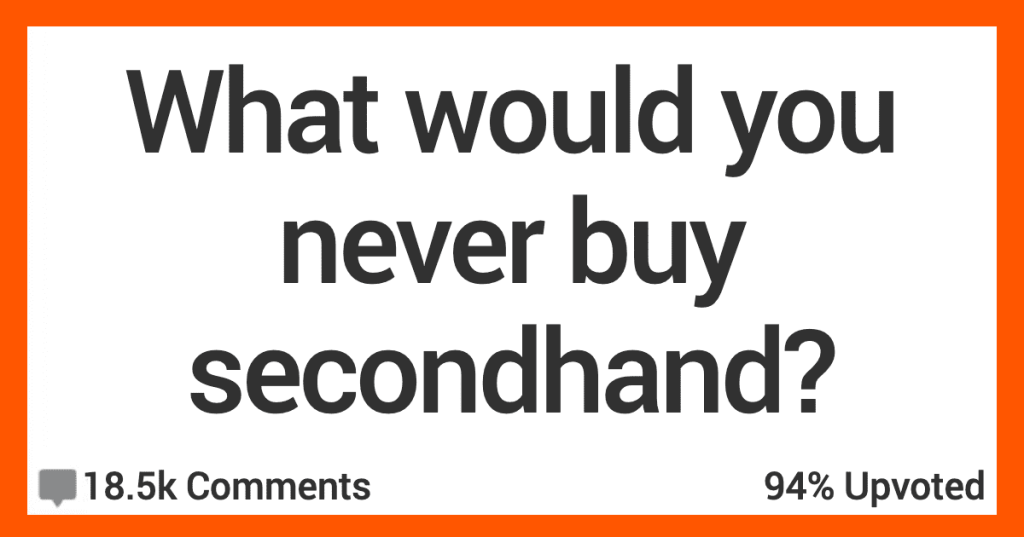 I remember when I was a kid, we had an Army surplus store downtown in my small town and my older brother told me that they sold used underwear there.

I never confirmed this rumor as true but I remember thinking that was just about the most disgusting thing anyone could buy.

And that brings us to today’s question: what would you never buy secondhand?

I saw one at a pawn shop once, the left side of it looked like someone took a belt sander to it for a minute straight.

I know people buy them second hand often, but I find it’s easy to conceal prior spills on certain couches.

Most couches are disgusting after a few years of use.”

I’ve disassembled quite a few for cleaning, and they are disgusting. If I have the chance, I’d rather use my own or buy a new one.

I detest the thought of using someone else’s.”

Used lingerie too (just the tops), once my big sister was going to buy both but assumed they were new but given to goodwill because the person who bought it ended up not liking it or something.

She even asked the lady at the desk about it. When we got to the car she found out both were stained especially the lingerie. You can assume with what.

I could never buy either of those used, especially after that.”

Believe it or not, there are plenty of people who would buy used socks and willing to pay more than the new ones.”

Only from friends were I can be sure that they are accident-free and clean.”

When mine were small, most were not closed systems, which allows aerosolized breast milk particles to get places you can’t clean.

THe FDA does not recommend it.”

When I was pregnant, my mother in law gave me a plastic baggie of used pacifiers. She had bought them at a garage sale and told me they’d be fine to use if I just boiled them first.

No. Hard pass. They went straight in the trash when I got home.”

I can go on but my goodness, there’s a lot.”

I couldn’t handle not knowing if ONE piece is missing until the end.”

It was half empty.”

A Reddit user once told a pretty good analogy: “Buying a used OLED TV is the same as buying a used fleshlight. There’s a good chance that it’s f**ked.””

“Men’s pajama pants. My husband started to look at some and I said, “nope. no way!”

Some men wear pj pants all night and all day with no underwear for days at a time. Like the same pair for multiple days of sitting around the house not showering.

Also not to mention teenage boys. I can’t get myself to let my husband buy used ones. It grosses me out.”

I am a host at a radio show, and I cringe every time I think about how many people have spit in that thing.”

“My answer has to be a mattress, despite them also being expensive, because you can get all types of diseases and stuff.

It’s incredibly dangerous. If you do buy one secondhand, I suggest getting it from somewhere trusted, and I suggest deep cleaning the mattress after you get it, because it can be really unsafe.”

What will you not buy second-hand?