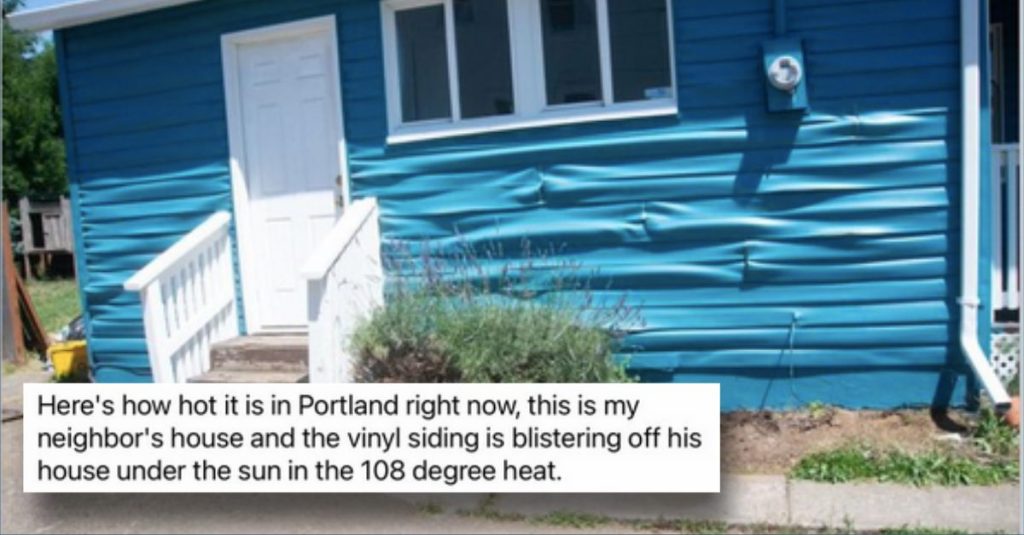 I hail from a climate that tends to get hot in the summer. The day I got married, the heat index was 105.

So it’s easy to hear about the heat wave that has been plaguing the Pacific Northwest and think it’s maybe not that big a deal. But it actually is a very big deal.

And it has been record breaking.

It knocked it out of the park by a staggering +1.6°C. This record wont even last 24 hours, the heatwave is just getting started.

It is only June. Annual highest temperature is normally in late July! pic.twitter.com/83K3F1ACXN

Not only do families not have air conditioning on the regular, the infrastructure wasn’t built for this kind of heat.

Think I’m joking? Check out these 15 pictures that really illustrate just how bad it is.

1. The actual ROADS are buckling

This is not a drill, and it’s not a disaster movie.

State Route 544 milepost 7 near Everson, Wa is currently closed. The asphalt roadway is buckling and unsafe for travel. WSDOT is advised and detours are currently being set up.

Portland has become the fiery inferno of Mount Doom.

PSA. If you park under or will be parking under train tracks, tar is melting off of them and it’s not fun to clean off. from Portland

They don’t make these different for different climates right?

In case you're wondering why we're canceling service for the day, here's what the heat is doing to our power cables. pic.twitter.com/EqbKUgCJ3K

4. Even their HOUSES are melting!

Paint, sure, but vinyl??

5. Not to mention their Air Conditioners are EXPLODING

And that’s if they’re lucky enough to have AC at all!

Thank god for cardboard, am I right?

Wife and I when we bought our house: “omg the SKYLIGHTS! We’ll have so much natural light!”

It’s taken the heat in the house waaaay down. pic.twitter.com/aIgAldLL9n

7. Plastic toys inside their home are losing shape

Just imagine the unseen damages to the infrastructure.

The heat wave hitting BC is reeking havoc on my toy room. Things are warping/bending and figure joints seem to be getting loose and making stuff fall over pic.twitter.com/GsDChb6F3D

But humans are nothing if not resilient, and they are fighting back.

8. Buying up all the ice cream before it can melt

Fans are bit the only thing Seattle stores have sold out of during the heat wave. Good luck trying to get ice cream. from Seattle

9. We have snow day French toast

They have heat wave picnics.

Seattle grocery stores in a heat wave just as bad as before a snow storm! pic.twitter.com/ad8WDSLzaV

10. And proving old adages are true

We’ve all heard it, but we never really believed it.

I mean I guess they’re going to try to cool off in it.

It’s so hot in Portland my uncle and I filled his skateboarding bowl with hose water ??? pic.twitter.com/ncGQxuyQzl

This is pretty ingenious, TBH.

Dad made me a pool to beat the heat!!!! from Rottweiler

13. All jokes aside, it’s a serious matter

They’re opening cooling centers to try to keep people out of hospitals.

I love hydrangeas, and this breaks my heart.

Before and after of my hydrangeas in the Portland heat wave. Goodnight, sweet prince from gardening

15. Even the perpetually snow-capped mountains are suffering

An absolute sign of just how bad it is.

snow melt from excessive heat in BC pic.twitter.com/pFjdDAJpIC

Wow. I’d heard about the roads buckling, but this was worse than I thought.

Makes me kind of worried about the future, what about you? Share your thoughts in the comments.