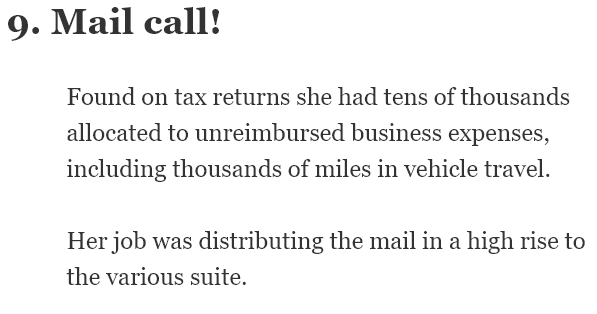 If you ever listen to legal breakdowns where real lawyers talk about how cases work, you’ll know that it rarely goes down like it does on TV.

Still, there ARE moments when one might realize the tides have definitely turned, and this case is in the bag.

Lawyers of reddit what was your “HOLD IT!” moment where you knew you would win? from AskReddit

Several folks on Reddit stepped up to the stand to share their stories. Here are some of the best.

I had a client charged with battery. The alleged victim didn’t really support the prosecution’s case and in any event was reluctant to testify. They still had another witness though, and she said that my client was hitting the alleged victim, so it wasn’t looking great.

The prosecutor and I were talking before court started, hanging out by the courtroom doors, when the witness walked in. She looked right at my client (who was sitting not five feet from me), then scanned the room and said “where is [client name]?”

The prosecutor and I looked at each other for a minute, and then he said he needed to check on something. When I saw him a few minutes later, he told me he was dismissing the case

When the petitioners attorney called me my brothers name when I was on the stand.

My brother is a sh**bag and I don’t associate with him anymore, but dude has a lengthy criminal history and it pops up on traffic stops occasionally. So I was in court over custody of my oldest and her moms attorney was trying to paint me as a hypocrite for being an addict.

I denied it all on the stand and he said “Now James I must remind you that you are under oath and by denying this you are committing perjury”. I stared him dead in the face and said “My name is Bill, James is my brother.”

Even the judge laughed at him and the only reason we didn’t bring it up sooner (we knew he submitted it as evidence but had no idea why) was because I really wanted to know what he was up to with it all.

My client was riding his motorcycle on a relatively calm street when this guy exited his garage, without looking, and run over him.

In deposition, the guy brought a witness that was with him on the passenger seat. The whole time, the witness maintained that my client was driving too fast and that there was no time to brake the car. I asked him the same question a few times in different ways, making him tell the story again.

In the fourth telling, he, already a bit frustrated, let it slip: “- Look, I’ve already told you. We were exiting the garage and, as soon as I lifted up from getting my cellphone on the car’s carpet-” “- Wait. So you didn’t even see the crash?” There was no coming back from that.

When I practiced insurance defense. Was handed a file to take over of a slip and fall. Guy tripped on a hose, tore his acl. The partner had taken the guys depo already so I read the transcript.

I’m a Michigan football fan, watched every game for 20 years. This guy testified he was the starting safety for a certain rival for certain years. Also that he graduated with a double major that doesn’t exist at that school.

I immediately knew this was false. Partner didn’t understand. Dug deeper, lied about so much stuff unrelated to the fall for no reason. Eventually found high school records from football injuries of head trauma, knee injuries, oh and a slip and fall injury a few months after ours. He also testified he rehabbed an ACL surgery after 1 month.

Motion for fraud on the Court filed, immediately settled.

Not a lawyer, but I’m currently in a custody battle.

Mother is saying I can’t be trusted because I’ve been refusing to take our child to the therapist.

The therapist testified I couldn’t bring our child in because therapy must have both parents’ consent, and mother has retracted consent.

6. We ship crap to customer

I worked on a case involving defective processors. In discovery we got emails from the defendant’s engineers that had worked on the processors. They were in an Asian country but the emails were in English because they were going to US executives.

One of the more senior engineers basically laid out the exact defect we were suing over, explaining what the problem was and why it was their fault, and finishing with “this is big problem, we ship CRAP to customer!”

Needless to say we hit them over the head with that in mediation, and they settled shortly after.

Not during trial. Happened to me personally.

I got into a car accident, another driver crashed into my car. The driver was such an a**hole, talking tough, blaming me, saying that he knew a bunch of lawyers, and here’s the kicker–he threatened that he was going to take me to court. I’m a laid back dude in contrast, and I was cordial to him. We went to the police station and made our statements to the traffic investigator.

I didn’t have a dashcam (at the time), but a day later I got a copy of the CCTV footage that was looking directly at the scene of the accident. I showed the investigator the video, and he was absolutely stunned how wrong the other guy was. At that point, I told the investigator that I was an attorney, and that I’d decide if I wanted to take the matter to court.

Following day, I got a call from the guy who hit me. Apparently, he said he also saw the CCTV footage, and he had called to settle things. I was just shocked because this dude who was previously Mr. Alpha Male, did a total 180 and was suddenly polite and respectful.

Amazing what an impact video has.

When I compared the scanned copy of the deed provided by the other side’s lawyers to the original my client eventually got around to providing.

The scanned copy provided by the other side had a witness signature. The original did not.

Found on tax returns she had tens of thousands allocated to unreimbursed business expenses, including thousands of miles in vehicle travel.

Her job was distributing the mail in a high rise to the various suite.

No driving involved in the job.

Not a lawyer, but we had no evidence that the woman who slammed into my stopped car going 85mph was drunk…until she indignantly admitted it on tape in her deposition.

She busted into my deposition and demanded she go first because I was a “lying b**ch”. She excitedly told my lawyer that the police report was wrong because it said she was coming from the movie theatre when she was actually coming from her friends bar.

“Did you have anything to drink at your friends bar?”

“I dunno, they just keep my glass full.”

“Did you take any medicine that day?”

The cops had refused to breathalyzer her at the scene because her husband was a firefighter that they knew personally. They told her to go home, sober up, and go to the hospital later. I heard the whole thing but had no proof until she handed it to me. They settled same day.

I trapped a defendant pretty badly one time. He testified in a depo he had a green arrow for his left turn and that my client ran the red.

Unfortunately for him, the additional turn lane arrow was installed 2 months after the wreck. Case settled for policy limits a week later

Not a lawyer, but was working as a paralegal for a law firm. We were defending a claim which had run into tens of thousands of pounds against our client (a holiday home), by a woman who had tripped over a speed bump while walking back to her caravan, and damaged her knee. The fall was genuine. The question was whose fault this was. She claimed it was the holiday home’s fault because she hadn’t seen the speed bump due to low lighting, poor marking etc. The claim had (outrageously) gone to months, and made it to court.

Going through the various questions to her, when our barrister asked how she knew the speed bump was poorly marked (or something similar). Her response “Well, I remember thinking how it wasn’t well marked when I was walking up to it”. Needless to say it was a short day in court after that point.

“My client has been keeping her son away from the father because the father has a new child. She is concerned that her son will act violently towards the new child and she could be held liable.”

Judge: “That’s not even a defense!”

Not a lawyer, but my girlfriend had a very minor nose to tail and a rookie cop who happened to drive by booked her on some massive charges and fines.

She went to trial, and her lawyer tore apart the cop. In the report he filed the officer ticked her ethnicity as African (she’s white / European), put the wrong date, the wrong street name, and didn’t get the other witnesses details.

The prosecution & officer argued that she had signed the witness statement so while a few things were accidentally filled out wrong, it reflected what happened.

Her lawyer asked to the officer show the court her signature on the statement, he looked at it, and said oh I must have forgot it. The prosecutor and a few police that went to the trial for some reason all let out audible groans. The judge adjourned for 10 minutes, the police still wanted to press on but the judge threw it out immediately after recess and gave the prosecutor an earful for taking such a ridiculous case to trial.

I clerk for a judge and we had a low level thief in our courtroom who had robbed one of his neighbor’s houses in the winter in Colorado and all the police had to do was follow the footsteps back to his house where he was hanging out with the stolen items and a small amount of drugs and a sh**ty handgun.

Order! Order in the court!