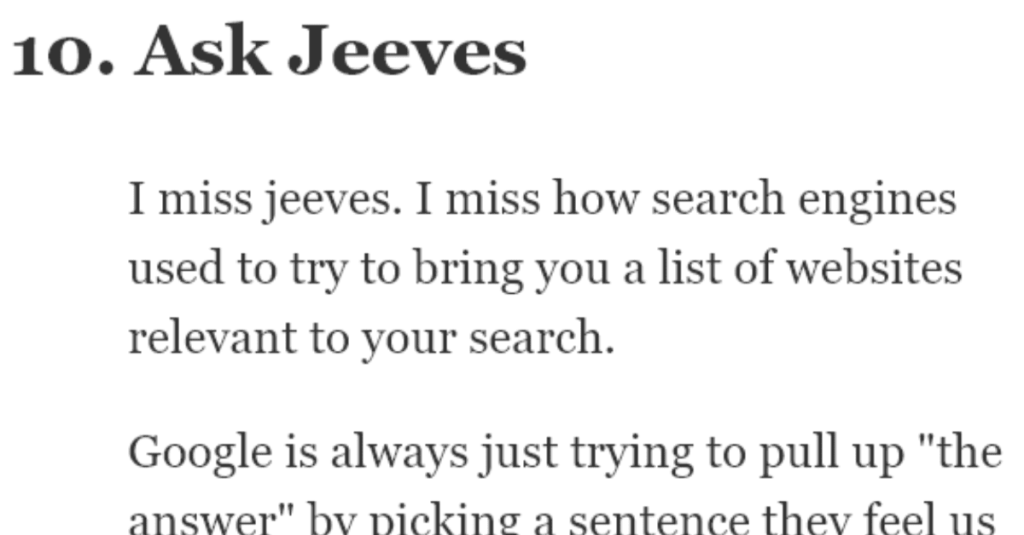 15 Things You Might Have Forgotten About the Good Ol’ Internet

When I was a kid, we used a service called NetZero, which was literally just free dial-up internet.

But as with all things free, that meant there were giant ads everywhere, and over time, the business model didn’t really hold up. We were restricted to fewer and fewer free hours per month, and finally we just stopped being so cheap.

But it wasn’t all bad.

What do you miss about the internet of the past? from AskReddit

There are definitely things about the old internet that one might miss. Such as these examples from Reddit:

Black background with yellow text with green links? You betcha. A line of animated GIFs for a page break? No problem.

And FRAMES, lol. List of links on one side loading stuff into a frame on the other.

People knew better than to use their own names on the internet. Hacker aliases only…

Now these fools are telling everyone about their upcoming colonoscopy and posting videos of their children all over the internet for clout.

3. The slight jankiness of it all

Websites that weren’t quite perfect, some that looked like a 5 year old designed it.

The logos that had personality, knowing if you liked an image, you saved it because you were gonna lose it.

The memes were simpler and dumber.

You came home from school to crank up the internet to see some fellow preteens animated series on YouTube which was drawn poorly and all the voices had different qualities because everyone was recording them on different mics in different homes.

Webpages that were not dynamic. You know, the kind that finished loading and then laid off my RAM and CPU until I clicked or typed something. The kind of that I could scroll through at my own pace, without triggering more loading and causing my computer’s fans to speed way up, and everything to else slow way down. Pages that would not get suddenly snatched away from me and replaced with “Aw, snap!” — and/or a popup — if I took too long to read them, or scrolled through them at the wrong pace.

These kinds of webpages give me the same infuriating bugged feeling as browsing in a brick and mortar store, and having employees hovering around me and repeatedly asking me if I need help with anything, and other customers constantly asking me to move.

The web that existed before strategically interrupting readers became a well-developed science.

5. The lack of influencers

I’m so tired of super mom of the year Becky posting her gym selfies and long motivational rants about how inspiring she is.

The internet of old was a utopia in a way. Everyone seemed to be mostly out to help each other. Free games, free music. People would hang in chat rooms. P**n was in GIF format and free.

Now a days, it seems everything is about money or everything seems to be a hustle.

I enjoyed the format and community.

So much better than Twitter for communication and discussion.

We made sure we went “online” when we were free to chat and had the right not to respond if offline, busy or away.

Now its: “im texting you and you were not answering thats why i called”. Yeah i know f**k off.

It was more a thing for a distraction and novelty.

Didn’t have to run every aspect of life on the internet.

Not every idiot was out there spewing venom

I miss jeeves. I miss how search engines used to try to bring you a list of websites relevant to your search.

Google is always just trying to pull up “the answer” by picking a sentence they feel us relevant from a website they picked as right. Even if the answer is correct, it lacks the in depth context that you often need to understand it.

Then, underneath the ‘answer’ instead of additional websites that can be used to gather additional info, it just lists alternative versions of your question, which when clicked on list additional no context, one sentence answers.

When you searched for something, most of the results were pages trying to give you helpful information.

Now when you search something, you get Wikipedia and 1,000 web pages trying to sell you something related to what you searched for.

When I first used the Internet in 1996, I thought it would bring us all together.

We’d understand each other and make friends around the world.

We’d judge people on their character not their looks.

Wow. Was I wrong.

When you wanted to download a photo of a nude woman, it was like a striptease to wait for that image to load all the way from the top down.

No one can use the phone cuz I’m on the internet.

Everybody used to play MMO’s back in the day and there were too many to count.

What do you miss about the olden days?