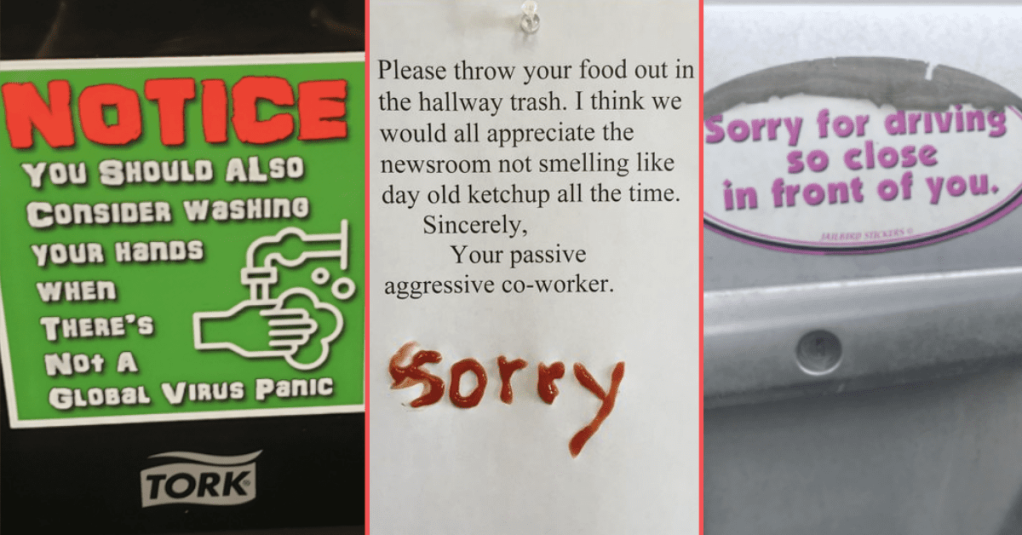 We all have our moments where we can be passive aggressive. I’m not proud of it.

I think it’s sort of a natural extension of being told all our lives that we need to be nice, or to hide our feelings, to avoid conflict at all costs. There has to be an outlet somewhere, and so the snark makes it way out as passive aggression.

Sometimes it’s an attempt to be funny, to make a point while smoothing over conflict. Other times, laughter may not be the intention, but it’s good when the rest of us can see the humor in it anyway.

Here’s a roundup of some of the best passive aggressive moments out there.

1. The bumper sticker: a reliable classic

I used to think that it would be a good idea if we could easily put scrolling messages on the front or back of our cars. You know, to tell people their gas tank is open or thank them for letting you into traffic. In retrospect, it’s probably better that we don’t.

2. People really can say a lot with their cars

It’s definitely a favored form of passive aggression. Or even just outright aggression.

Not to be confused with the writing inside the stall. Those messages may or may not be passive aggressive.

The passive aggressive sign at I place I’m visiting. from funny

We had some of these at a place that I worked.

I think people are at their most passive aggressive at work.

You can’t outright go at someone because you still have to work together.

6. But sometimes things just have to be said

I kind of like it when people think outside the box.

7. Sometimes businesses take matters into their own hands

They definitely know their clientele.

My gym is pretty passive-aggressive from funny

8. Just remember that the customer is ALWAYS right

And they might decide to get even in the end.

No onions please from funny

9. And sometimes it’s just a matter of protecting your home turf

Whether you rent and have shared facilities or not…

10. Homeowners can be especially tetchy

But it does feel like we’re the chosen ones and I don’t understand WHY.

11. It’s hard to know how to talk to your neighbors

One of my neighbours taking passive aggressive to a new level pic.twitter.com/rPyDo4g9Kx

I bet almost no one is as passive aggressive as a spouse. You think you’re doing a good thing by avoiding a fight…

13. Or anyway, you’re making your point

That’s definitely one way of doing it. If the other person actually CARES that the bed isn’t made.

When she's still mad af so she only makes her side of the bed… ??? pic.twitter.com/DgZLmdaiLe

14. Living with other people is just hard

It helps to get creative and add a touch of humor. But did they DO the dishes?

15. Hopefully you can laugh about it

Because the humor takes the sting out of the conversations we’re not having. This one is next-level though.

I fell out with my girlfriend this morning, but before leaving for work she pegged the washing out. Passive aggressive status Boss level! pic.twitter.com/JpHX48cGmu

16. Just remember, the kids are watching and learning

They hear what you say and they see what you do, and then they repeat it and it’s hilarious.

My dad found my passive aggressive note that I wrote the toothfairy. It was better than I remembered.

These are all so amazingly passive aggressive that I almost feel sad not to work in an office with people anymore.

Did we miss any great opportunities or responses? Leave them in the comments.