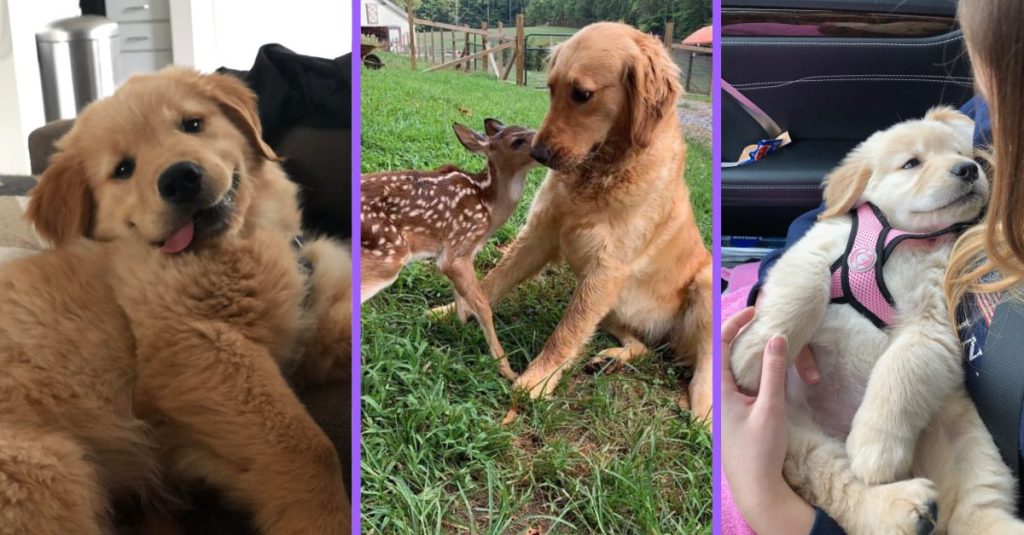 Also I like the idea of being able to throw things and have someone go get them for me.

So to begin or end your day on a happy note–here’s a roundup of what I’m declaring the world’s happiest dog.

1. Head skritches ellict all the smiles

Don’t believe me? Try it yourself.

2. But belly rubs are even better

I believe this is called perfect zen.

3. They love their people from day 1

And they have so very much love to give.

Picked up Libby 7 weeks ago, this was her on our way home the first day. She is staring at my girlfriend. They are in love. from goldenretrievers

4. And they will never stop showing you just how much

Their love is real and pure and boundless, much like their energy.

When you come home to golden retrievers… from aww

I mean look at them!

Made my day from wholesomememes

6. And they are very patient when meeting new friends

A friend of mine has a Golden Retriever that recently made a new friend. from aww

7. They also love each other

Goldens always stay puppies – not matter what age from aww

8. And they bond for life

Mother and Son Love – My Golden Retrievers Lucy and her son Gilly napping and making a heart with their feet. from Animals

Look at this good doggo’s own seeing eye dog!

This is Charlie and Maverick. Charlie had his eyes removed due to glaucoma, but then Maverick came along as his little helper. Now they’re doing amazing. Both 14/10 pic.twitter.com/qjkhYLihEO

10. This little buddy knows how to get what he wants

And he waits so patiently too!
(Also the reason I will never drink from a public fountain!)

11. And this good doggo knows how to say sorry

He’s better trained than most people!

12. But most of all, these silly pups just want to have fun

Even if it means interrupting their sister’s photoshoot…

Sneaking into the picture … !!

13. Because they really are photogenic

And they know it!

Golden Retrievers That Will Melt Your Heart Selfie from goldenretrievers

14. But they know when it’s time to get serious

“Speak softly and carry a big stick…”
If it was good enough for the Old Lion Teddy Roosevelt, who can argue?

Out of the Serengeti forest comes a rare golden elk. What impressive antlers. Hard to balance.
He's headed into the wilds of the back porch.
Does Mom have treats?

15. And they know when to get together for a palaver

By seeing and doing.

My six-month-old puppy learned how to walk down the stairs by watching her brother.

Her brother only has three legs.

This is the end result ? pic.twitter.com/ITpBcbg7EK

18. But whether they’re goofing around

With their big boopable noses.

This is our silly boy, bodie! from goldenretrievers

19. Or just being your BFF for TWENTY YEARS

My gosh, what a noble looking fellow!

Augie Making History as the Oldest Golden Retriever Ever! from aww

These dogs are here to have fun and make you feel loved.

What do you think? Most perfect breed ever? Tell us in the comments!