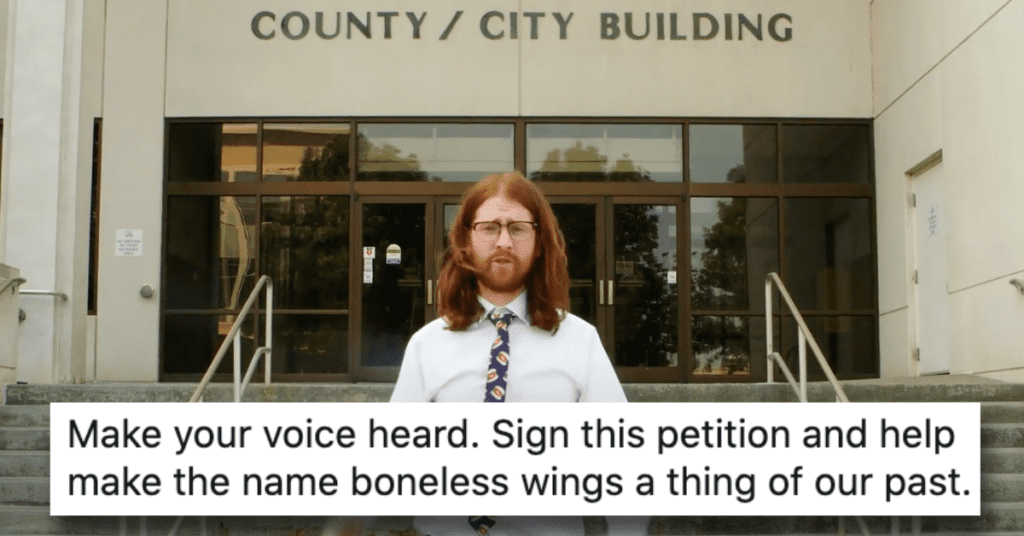 Would you like to meet a legend? I’m talking about a bonafide American hero who we can all rally around in these divisive times?

Well, you’re in luck, because we have a great story for you!

Not too long ago, a fella in Lincoln, Nebraska named Ander Christensen stood before the Lincoln City Council and passionately poured his heart out about a very important subject: boneless chicken wings.

With elections coming up, it's important to make your voice heard in every way possible! Sign the petition against boneless wings at https://t.co/w3hbwrF1By#bonelesswingsarealie #saucynugs #VOTE pic.twitter.com/5BkjD43XA1

That’s right, Christensen is mad as hell and he’s not going to take it anymore. He told the Council, “I go into nice family restaurants and see people throwing this name around and pretending as though everything is just fine.”

He ended his powerful speech by saying boneless wings should be called “wet tenders…saucy nugs, or trash.”

The man has a point. As a wing lover, I’m pretty much in agreement with him…and I think this could be the start of a worldwide movement.

Here’s the full video of Christensen talking to the City Council. Take a look.

Is this guy great, or what?

AND, to top it off, Christensen also recently announced his “Saucy Nugs” tour, where he’ll be taking his message to the people. The man is clearly doing very important work.

I don’t think that’s too much to ask for, do you?

Okay, now it’s your turn. If you’ve seen anything really funny or interesting on social media lately, please share it with us in the comments. Please and thank you!