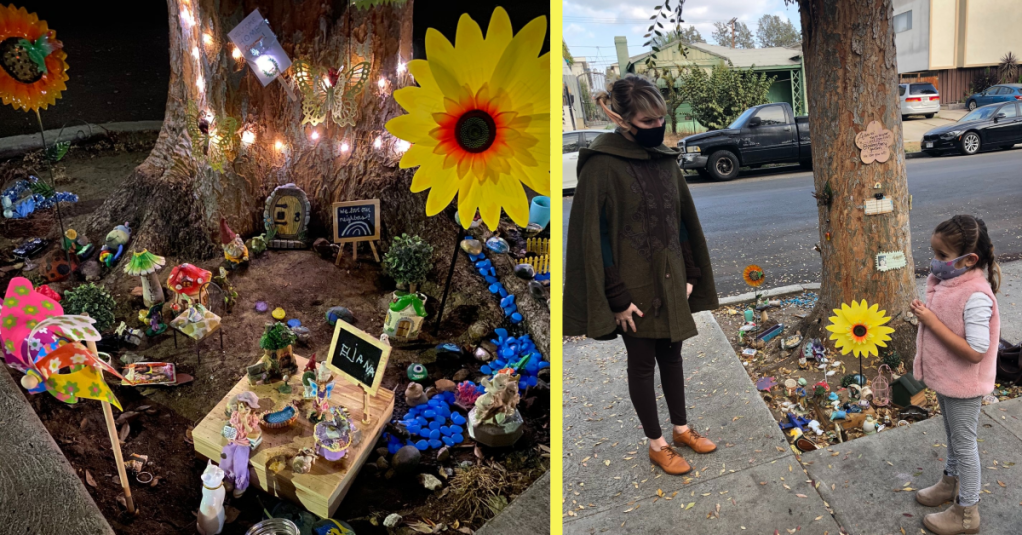 This wholesome story comes to us from a woman named Kelly who decided to give a child who lives in her neighborhood a big thrill during the pandemic that has been stressful for all of us.

She started out by saying that she noticed something interesting on one of her walks.

I think everyone could use a lighthearted/happy story right now so here goes:

At the beginning of the pandemic I went through some painful personal stuff and would often go out at night for long walks because no one was around and I couldn’t sleep anyway. One night I was walking

down my street and noticed that someone had set up a few little objects in a tree planter and upon closer inspection I realized it was a fairy garden with a little note about the 4 year old girl who felt lonely in quarantine and wanted to spread some cheer. The next day I wrote pic.twitter.com/aCEK2k5PCy

So Kelly decided to take action and play along with the young girl who wrote the note so she could lift her spirits.

And she posed a challenge to the youngster.

a little note to her, pretending to be a fairy named Sapphire that had come to live in the tree because she had set it up so nicely and I left it on the tree that night on my walk and said I would gift her with a magical fairy dice (I got really into crafting resin rpg die at pic.twitter.com/c0FDrlSm3M

the start of the pandemic) if she did 3 things for me: pic.twitter.com/1Ae9DjazAW

And she was surprised by what she found the next evening when she was out for a walk again.

I wasn’t sure if she’d respond or even find the note but it was fun just imagining what she’d think. The next night on my walk I found this and immediately burst into tears: pic.twitter.com/eOKKupzf7x

And so the game continued…and Kelly left a note for the girl’s parents, too, so they wouldn’t be worried about anything.

So I left a bunch of my die that had small imperfections and left her another note and also a little extra note for her parents with my name and phone number so they could contact me and know I wasn’t some creep leaving notes for their small child: pic.twitter.com/89B5PcpxBa

And then there was this note from the young girl to the “fairy”, a.k.a. Kelly.

This was there the next day: pic.twitter.com/3jKB9bHcEh

Kelly talked about how this fun adventure with the young girl provided her with relief during the pandemic, which has made her so lonely.

And Kelly and the girl have been writing each other notes this entire time.

Doing this every night gave me purpose in a horribly painful and lonely time. I looked forward to my days again and I started ordering art supplies and little trinkets to leave her.

We wrote back and forth throughout the last 9 months, helping each other feel less lonely and I pic.twitter.com/mTscxUMxwX

And she enlisted the girl’s mom to help so the fairy tale would be even more realistic.

It was time to break out the costume!

got to chat with her mom via text to make sure my gifts were a little more personal. At one point she asked for a photo of me and thankfully I had some elf costume items from the previous Halloween so I photoshopped some photos of myself in costume, looking like a fairy. ? pic.twitter.com/XgTAWnuWXK

And then the girl’s mom told Kelly that they would be moving away.

And Kelly told the girl that she, the fairy, had to move as well, to try to make her feel better.

In the past month her mom sent me a text letting me know that they had closed escrow on a new house a little further away and would have to leave the fairy garden behind in the care of their neighbors. She also mentioned that Eliana was having a tough time with it so I made sure pic.twitter.com/PuulHuy0VC

to include some support in my letters and told her I had to move as well so she’d feel like we were both going through it together. Her mom said it was helping her so much and they really wanted to try to see me somehow before they left.

Well today, their moving day, after a pic.twitter.com/aBtff6OhWN

And the two fairy pen pals finally got to meet in person.

And she told the girl about how fairies have to move sometimes, too.

few days of planning with her mom, I got to meet Eliana. I left one last note this morning saying i had to move out today and made up a little story that when fairies move houses, they grow to the size of a human just for one day to move all of their belongings. I said I had one pic.twitter.com/yMUWntFr3E

And Kelly decided to play one last fun game with the girl.

more gift for her and would leave it this afternoon and hoped ? she wouldn’t catch me. As they came back from their last walk around their neighborhood I was by the tree leaving her gift and she got to catch me in the act. (I got tested two days ago and her pic.twitter.com/ZpsCzEDdwI

And the two got to know each other!

parents did too to make sure we were all safe because I really needed to hug that girl) We got to sit and talk for about an hour and she asked me a million questions about what life is like as a fairy, some I had prepared and others I hadn’t. It was incredible and one of the pic.twitter.com/f82VX0J75p

Kelly talked about how important the whole experience was for her and how much the little girl lifted her spirits, as well.

most important and impactful afternoons of my life thus far. I hope one day when she’s older she can understand that I truly needed her as much as she needed me these past few months.

This is the book she wrote me after I encouraged her to keep telling such amazing stories. pic.twitter.com/lqRNyJSdxi

And the two plan to keep in touch! I’d say this was a win for everyone involved: Kelly, the little girl, and her parents.

We plan to keep in touch/write letters to each other from time to time. She’s changed me forever and the things her mom has said about how her self-confidence, her kindness towards others and her creativity have skyrocketed since meeting me make me feel like I made an impact too. pic.twitter.com/UNkhkrEcR7

Have you come across any wholesome stories lately that made you smile?

If so, please share the with us in the comments.

We can’t wait to hear from you! Thanks!