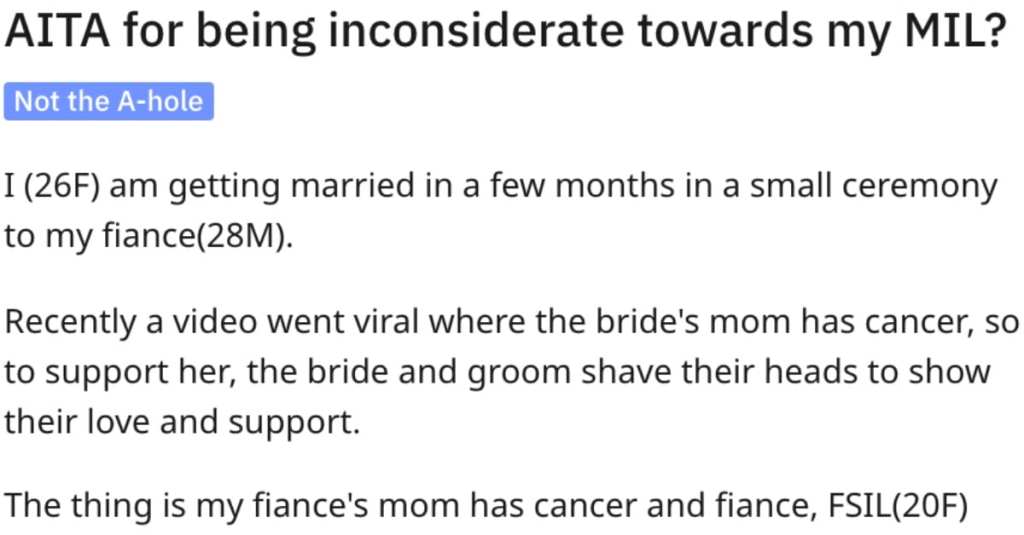 Am I a Jerk for Being Inconsiderate Toward My Mother-in-Law? Here’s What People Had to Say.

The relationship between a mother-in-law and a daughter-in-law sure can be strained, huh?

Well, I guess that goes for all people and all in-laws, actually…

And a young woman who is about to get married recently went through a strange and complicated situation with her mother-in-law that left her asking if she acted like a jerk.

She took to Reddit’s “Am I The *sshole” page to ask for advice from the readers there about a situation she had with her mother-in-law.

AITA for being inconsiderate towards my MIL?

Recently a video went viral where the bride’s mom has cancer, so to support her, the bride and groom shave their heads to show their love and support.

The thing is my fiance’s mom has cancer and fiance, FSIL(20F) and FBIL(19M) all want to shave their heads at the wedding to show their support.

Now, I think this is sweet as my MIL is a very kind person and I have no problem if they do so (fiance included).

But, they want to do it ONLY on the wedding day plus I HAVE to do it to.

This is where the conflict lies. My hair grows very slowly and has taken so long to grow till beyond my shoulders and I take extremely good care of it by using special herbal oil that can only be found in my hometown(I live overseas).

And I want my wedding day to celebrate the union of 2 souls and 2 families not to make it about my MIL.

I don’t mind ANY OTHER DAY. Now all of them are saying that I am being inconsiderate to my MIL.

NOTE-MIL does not have any idea about it .

EDIT-They have finally understood that getting me to shave is futile. But they are adamant about doing it on the wedding day.

So much has transpired in less than a day and I just want to vent.

I talked to my fiance and told him firmly that I will NOT be doing it and this will not be happening on the wedding day and also told him that they should run it by MIL to see if she is comfortable with it.

He exploded saying I had to do it if I was family and all that and they know that MIL will like it as they are her children etc.

I was frustrated so I went to the washroom for cooling down and on the way back to the living room I had to pass by the bedroom where my fiance was on a call.

I freaked out on hearing that and my gut said that he was cheating .

But I kept my cool and waited in the living room and when he came I said yes to shaving my head too on my wedding day.

He seemed pleased and went to text to work. When he went , I opened his lap and went through his texts( Laptop and phone are synced). On opening texts to a female colleague and scrolling up, I learnt that he was getting married to me for money(my parents are multi millionaires and I am the only child.) and that he was in love with said colleague since before we started dating.

-to find new ways to control me

-fiance is not turned on by ” bald women ” so gf wanted to ensure that there will be no spark from his side after marriage( we have never slept together yet.was waiting after marriage).

I have no idea as to what I should do. I never expected things to go so out of hand.”

Oh, boy…let’s see how folks on Reddit responded to this story…

This person argued that the bride-to-be was not wrong at all, especially since it’s HER WEDDING that we’re talking about.

Another Reddit user called the situation “crazy” and argued that it was pretty rude to ask someone to shave their head for their wedding day. 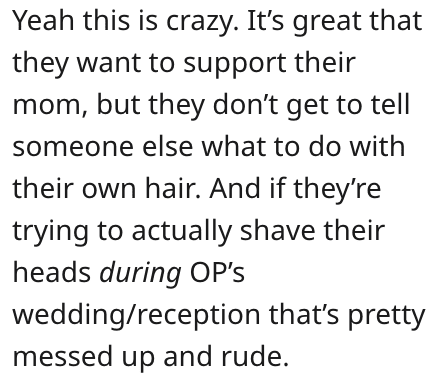 This individual called the request “insane” and made a good point about what and WHO the wedding is actually supposed to be about. 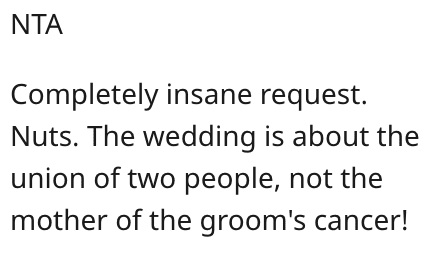 Another reader talked about how the mother-in-law should have been part of this conversation to begin with.

Maybe not all people struggling with cancer want to make a big deal about it or make themselves the center of attention. 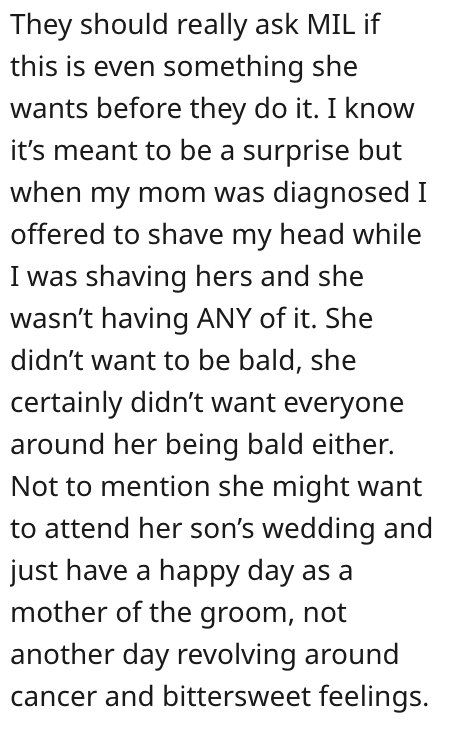 This person thought the whole idea was obnoxious…and said that their mother would not have been pleased if they pulled a stunt like this. 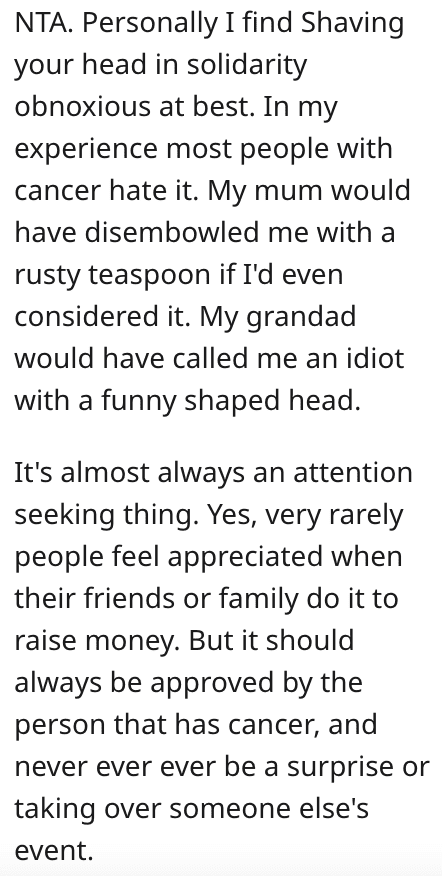 Lastly, this reader said they understood the reasoning behind the whole idea, but it’s this woman’s wedding day and maybe the mother-in-law wouldn’t even want that kind of attention, anyway. 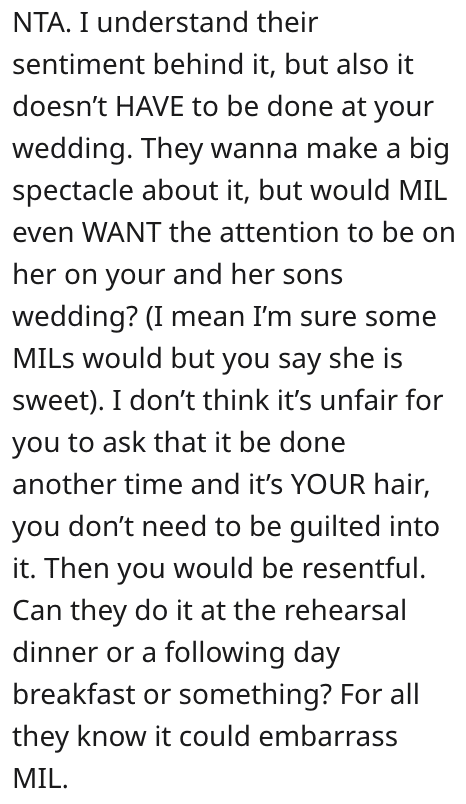 Is this woman wrong for treating her mother-in-law this way?