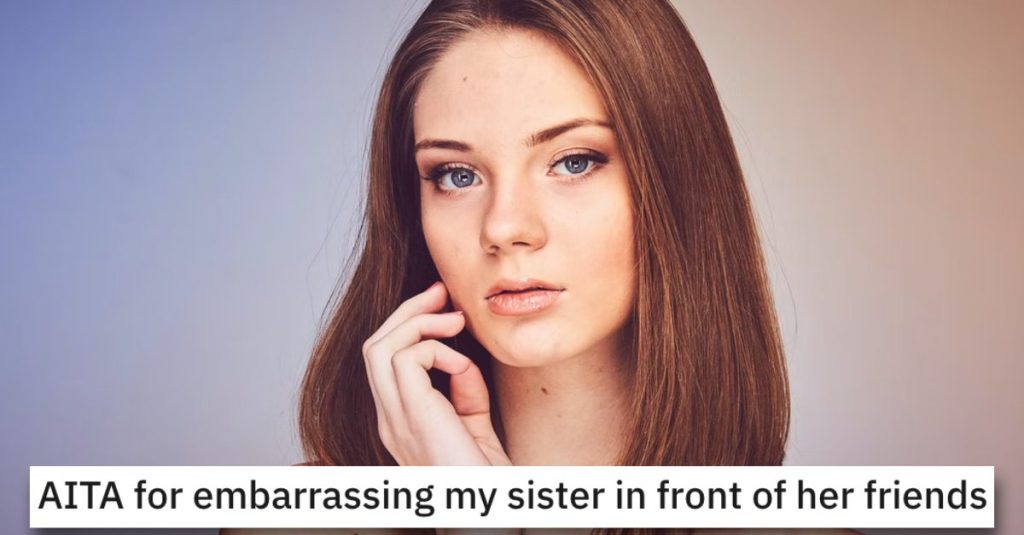 Are They Wrong for Embarrassing Their Sister in Front of Her Friends? People Responded.

Unless they’ve REALLY done something to deserve it, embarrassing a sibling in front of their friends is usually not in your best interest…

But, let’s be honest: sometimes it feels great!

Take a look at this story from Reddit’s “Am I the A**hole?” page and you decide if this person did the wrong thing.

AITA for embarrassing my sister in front of her friends?

“I moved in into my dad’s house a year ago because my mom has passed away due to drug use, my sister who is only 4 months older then me h**es me because I am a affair baby.

My dad’s wife only found out about me 3 years ago, which according to my sister their marriage never been the same since her mom finding out about my existence.

Everyday she will do things to make me feel like an Alien at my own home, she ripped a photo I had of my mom and I and stolen a necklace my mother gave me, she also will bump into on purpose when I’m walking around the house.

My dad is packed with so much guilt that he doesn’t really do anything, my sisters mom puts more effort into stoping her daughter then my dad

My sister invited her friend group over which consists of 4 girls and she starting making fun of my dead mom and me, saying stuff like “I wouldn’t talk to her she’s only gonna end up like her mom in a few years” or “the reason why she looks like that is because her mom used while she was pregnant” she also said “druggies like her mom don’t deserve a life anyway”

Everyone was laughing at me and I felt away so I told my sister about herself “saying what kinda evil soul makes jokes about someone’s dead mom not just anyone but their own sister, I have not done one thing to you but you done nothing but make my life miserable, I’m sorry that your dad cheated on your mom and I’m sorry that caused my existenced but I’m here now so deal with it or at least leave me alone”

My sister starting crying saying that “I ruined her life and that she wished I didn’t exist” and ran to her bedroom.

My sister’s friends didn’t know that I was her sister and thought I was a fosterchild or something so all of her friends are asking about bunch of questions about me and are upset at her for lying, she refuses to show her face at school now.

But my sisters mom thinks I did nothing wrong and that it’s her daughters fault for lying and bullying me in front of her friends and she says it’s a natural consequence.

This is just a summarize version of everything it would take alot of writing to put everything in, I’m sorry if I left any important details out.

Aita for embarrassing my sister in front of her friends?”

Here’s how people on Reddit reacted to what happened.

This reader said this person is NTA and that their sister should be mad at their father. 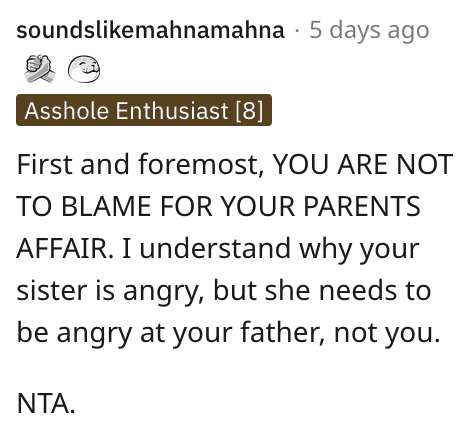 Another individual agreed and said this whole situation is pretty horrible for all involved. 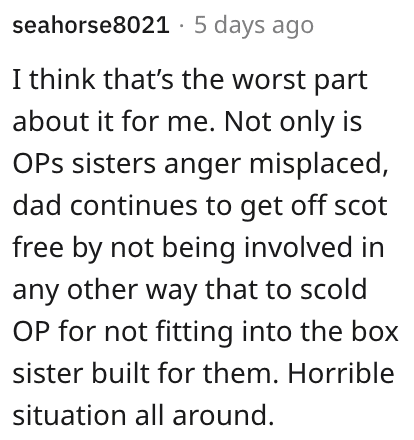 And another Reddit user said this person is NTA and that the father is nothing but a coward.