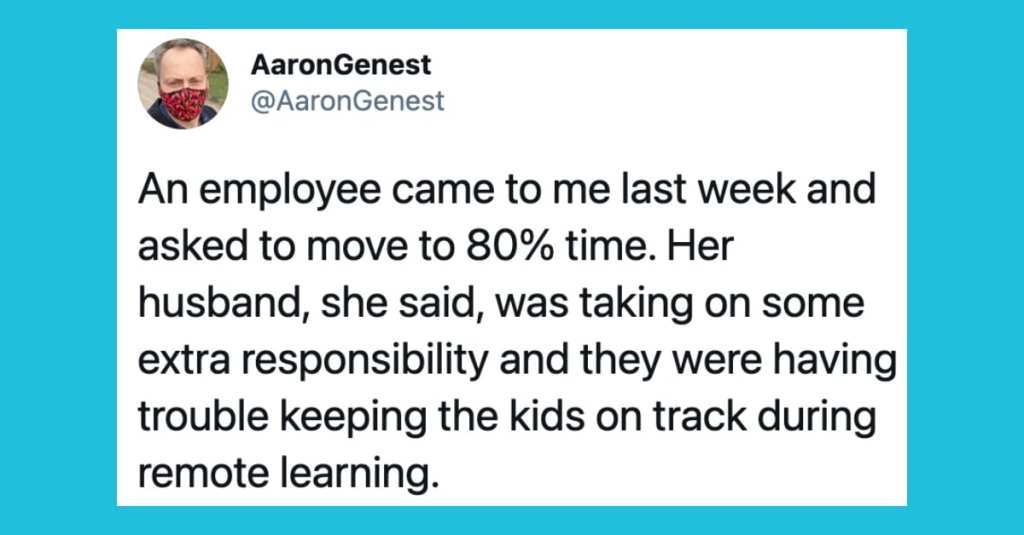 Now, this is a pretty unique and interesting story…

Aaron Genest, who is the President of SaskTech in Canada, wrote a lengthy Twitter thread that went viral and got a lot of feedback on the social media platform because it deals with a lot of hot button issues.

Let’s take a look at what Genest had to say.

An employee came to me last week and asked to move to 80% time. Her husband, she said, was taking on some extra responsibility and they were having trouble keeping the kids on track during remote learning.

Hmmmm. He said no…

Genest continued with his story.

Women in the workplace have been disproportionately affected by COVID, erasing decades of gains. And it’s easy to see why when women typically earn less (even for the same jobs) than their partners. https://t.co/2jObc3Ifn0

He went on to say that the woman’s assumption about what would happen was wrong.

Every reason my employee gave was valid and rational (we hire great people), but the base assumption was wrong.

The assumption was that we should expect the same thing of our work lives now in terms of productivity and time commitment that we did with pre-COVID.

He said that the productivity of the team shouldn’t go down just because of what’s going on in the world and that his team actually did better despite working from home with children during the worldwide pandemic.

I have a high-performing team who outperformed themselves again this year, outperforming almost every other team in my company in fact and winning awards for it.

They did it with kids at home, with COVID isolation, and with increased stress and loneliness.

And he added that his team went above and beyond and relied on each other to achieve their goals.

They did it by being a supportive group and working together.

Genest also said that they covered for each other and were a cohesive unit, which ultimately led to success.

When someone has to leave to pick up their kids, someone else covers. When a 2-year-old bounces into a business call, they smile and everyone understands. When a day is less productive because they can’t stand staring at the walls anymore, they get out so the next one is better.

And so he said no to his female employee because of all of those reasons.

So I said no. No, you can’t become one of the women earning less because of COVID. No, you can’t sacrifice your career advancement because of a perceived lack of productivity. No, you don’t need to feel guilty about taking the time to make sure your kids are learning.

He also wrote that the whole team is working to make sure that this specific employee is happy and productive.

Instead, we’re working together to make sure that she’s still productive and happy, that she feels comfortable blocking off whatever time she needs in her calendar to support her family, and that she and her family will be healthy and ready for when we come out the other side.

“I’m also pleased that Siemens (my employer, with 350,000 employees) reached out to me from headquarters in Germany to tell me that my message matched their ethic and offered to help manage the deluge.

I actually didn’t quite realize that I had put the bait and switch into the thread until people pointed it out. I guess I have a bit of a dry sense of humor and that was my natural approach to storytelling. It turns out that it works.”

What do you think about this boss’s actions? Share your thoughts with us in the comments.