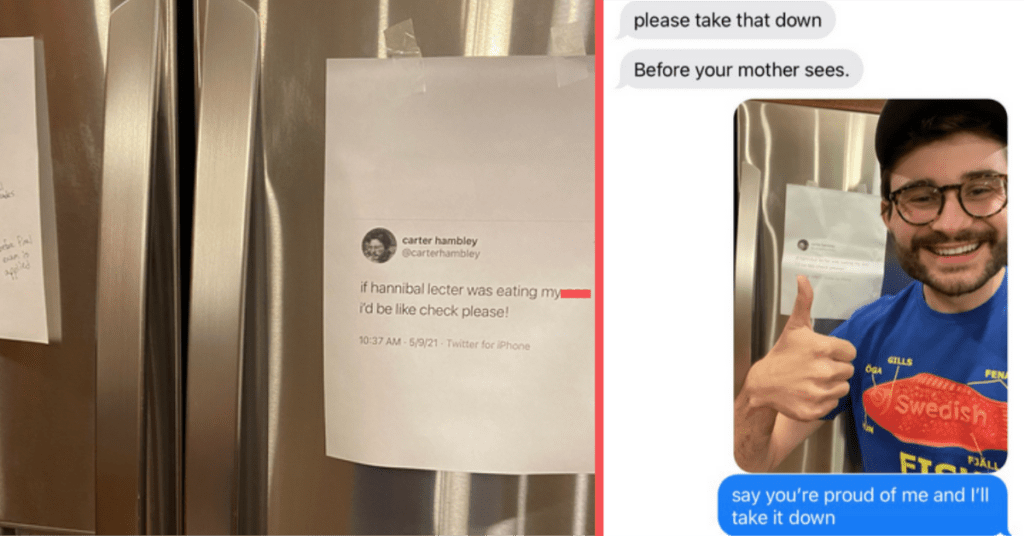 Comedian Tries Out New Material on the Family Fridge, but His Dad Says, “No.”

When you were a kid, did your parents put your report card on the fridge? I don’t remember mine doing it, but they probably did. My sister and I both made pretty good grades, generally on the honor roll.

So by the time I was in college, my dad would look over my report card and tease me about how I needed to do better, particularly if I scraped an A- or a B. It never occurred to me in college to put my own report card on the fridge, but now I kind of wish I had.

That’s what Carter Hambley, a comedic writer and performer from Chicago, attempted to do last month when he spotted his sister’s report card on his parents’ refrigerator. But instead of a report card, he printed out and stuck one of his tweets on the fridge.

It was a joke tweet that to date has been favorited less than 2 thousand times.

if hannibal lecter was eating my ass i’d be like check please!

Kind of funny, maybe not his best. His pinned tweet from last year has been favorited 11 thousand times.

But he printed it out and taped it next to his sister’s report card on the fridge.

parents put my sister’s report card on the fridge so i added mine too pic.twitter.com/RVz1blCR5U

Maybe a mistake–maybe he should have printed it in a way that showed how many times the ribald joke had been favorited and retweeted to really illustrate his score to his parents.

Otherwise it’s more akin to showcasing your art than your report card.

His father, however, was not amused, and asked him to take it down before his mother saw it.

(No word on why his father didn’t just take it down himself.)

Say you’re proud of me and I’ll take it down.

Followers lost it when they spotted his father’s cut-off reply. A simple “no.”

You nearly cropped out the part where he said, “no.” pic.twitter.com/sTtdG1gb7k

Another user pointed to the art versus grades issue as the reason his dad wasn’t on board:

And still others dissected the timeline of the father-son text exchange:

He thought about saying it for a whole ten minutes and decided it wasn’t worth it.

If the original tweet didn’t go viral, the stunt with his parents’ fridge sure got the intended result, raking in over 200 thousand likes and thousands of retweets and quote tweets (although people can get kind of mean in a quote tweet).

What do you think? Budding comedian or attention-seeker? Tell us in the comments.