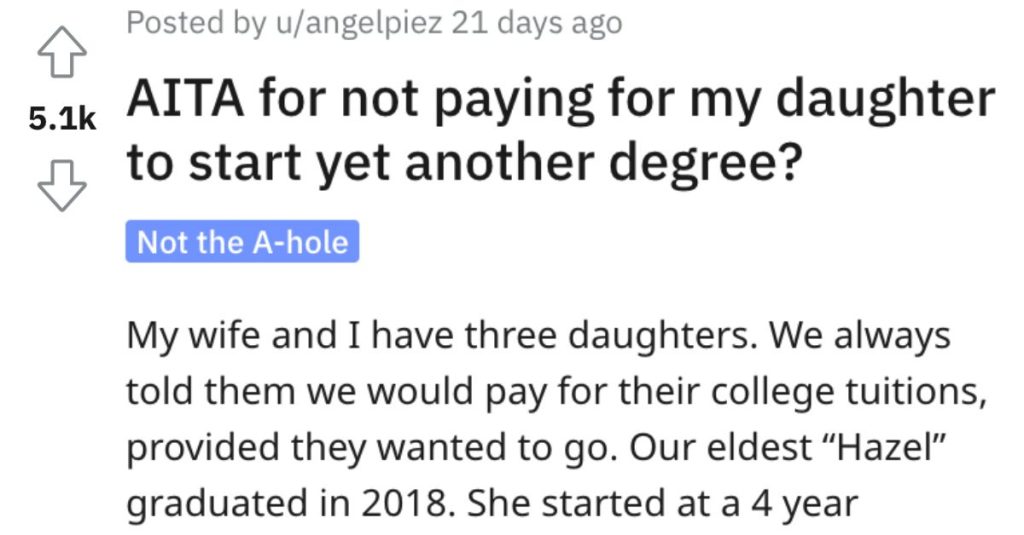 I think that if your parents are willing to pay for you to go to college, you better get that degree…

Or, on the flip side, if you DON’T finish, you shouldn’t expect them to pay for you to go back to school.

That’s on you the next time around!

Check out this story and see if you think this dad is wrong for not paying for his daughter to go back to school.

AITA for not paying for my daughter to start yet another degree?

“My wife and I have three daughters. We always told them we would pay for their college tuitions, provided they wanted to go.

Our eldest “Hazel” graduated in 2018. She started at a 4 year university and lasted there 6 months before dropping out and coming home. We had to eat a lot of fees because by that point they were non-refundable. Her reason for dropping out was she didn’t want to pursue that major anymore. We told her she could switch to undecided or general studies until she did figure it out but she insisted on dropping out.

From there, she enrolled in the local community college which was cheaper, but as we didn’t qualify for financial aid, we were paying for all of it. She stayed through til the world fell apart in 2020. She tried online schooling but it was too hard and we respected that, our younger two were struggling with virtual school, I can’t imagine how hard college was! She took some time off, then in January of this year, started at another 4 year college. Keep in mind, only some of her credits transferred. But we were supportive.

Last month, she came to us and said she wants to drop out yet again, and go to cosmetology school. I have nothing against that but after spending tens of thousands of dollars on these other schools, she’s gotta pay her own way on this one.

I told her if she finishes and gets her license, I will reimburse her but she needs to figure out how to finance it on her own. She asked how she’s supposed to do that and I told her to get a job. She got upset and said I’m going back on my word.

It doesn’t help that this year, our middle daughter graduated and we’re paying for her to go to a 4 year college. Hazel said this isn’t fair and I said I’d do the same to her sister if she was as wishy washy. Now, Hazel won’t talk to me.

This reader thinks he’s NTA and that he’s paid for enough. 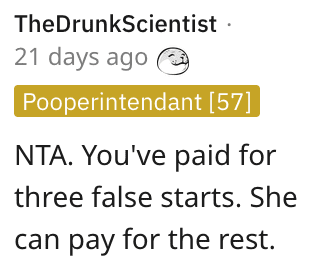 And this Reddit user said he’s NTA and pointed out that he’s being generous for offering to reimburse her if she finishes. 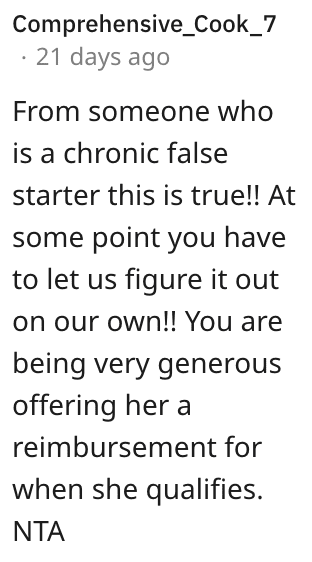 And another individual also said he’s NTA but that he probably should have put his foot down after the first time she dropped out. 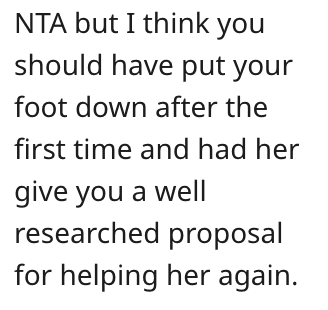 We look forward to it.