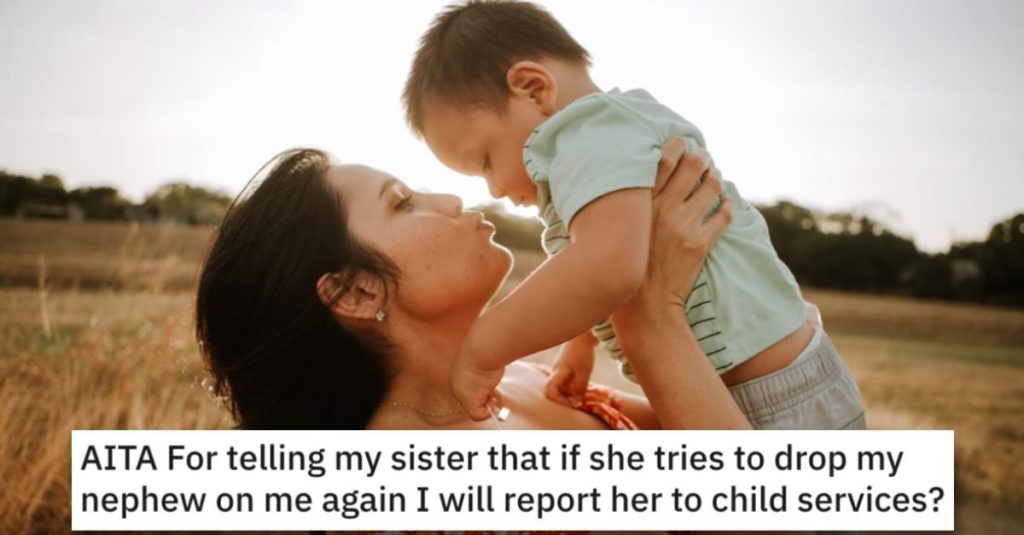 And this tale from Reddit’s “Am I the A**hole?” page is another one that p**sed me off.

Read the story below and see if you think this woman is acting like a jerk toward her sister.

AITA For telling my sister that if she tries to drop my nephew on me again I will report her to child services?

Lincoln’s father is not in the picture. She had two possible guys who she believed could be Lincoln’s father, but neither of them was. I have nothing against single moms who have kids early, but for Angela getting pregnant right out of high school possibly explains her attitude of how she should party while older people are responsible for Lincoln. Since Lincoln was six months old, Angela has never stayed at home with him for more than three days a week.

Before her go-to was to leave Lincoln with either my mom or aunt. But my mom’s health has declined recently and my aunt moved for her husband’s work, so now I’m Angela’s go-to. At maximum, Angela will give me a half-hour notice that she’s dropping off Lincoln at my house.

Usually, there is no notice and Angela just knocks on my door with Lincoln. Angela has no consideration for what I have/want to do. She’s fortunate that I work a desk job and have my own cubicle. I’m able to keep Lincoln occupied with a DVD player and my co-workers don’t mind as Lincoln is pretty quiet/calm anyway.

I have been telling Angela since she started doing this that she needs to step up and be a mom because she can’t expect me to always be Lincoln’s sitter and parents don’t get to party all week long. Angela just will make excuses how moms are entitled to have fun without their kids too and young people don’t get that much time to live life before getting old, but she would “do it anyway.”

Angela never followed through and the last straw is when she came to my house and just dumped Lincoln and his stuff off while informing me that she and her friends were going to Myrtle Beach for the next three days. I had Lincoln wait in a different room with some earbuds and then blew up on Angela that she should just put Lincoln up for adoption since she gives zero s**ts about being a mom.

I also told her I would help with Lincoln for three more weeks while she worked out some long-term childcare options, then after that if she tries to dump Lincoln on me again I will call child services on her (I am fully prepared to do it.) We argued before she eventually took Lincoln back and left.

My friends agree that even though it’s a last resort, I should be prepared to do it because I can’t spend Lincoln’s whole life dropping everything to babysit him and Angela needs to get her s**t together.

However, my other family members are saying that it is going way too far to even think about calling child services on Angela because she’s family and she’s a young woman who it’s unfair to have her entire life revolve around a child. They and Angela all look down on adoption because “You re-home dogs, not babies.”

And as I mentioned, my mom is in poor health, and since I plan to stay child-free, I would throw away her likely one opportunity to watch a grandchild grow up.

AITA For being prepared to call child services on my sister anyway?”

One person said she’s NTA and that her sister chose this. 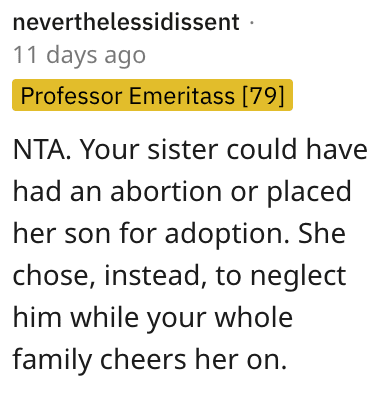 And another Reddit user agreed and said people need to be prepared to have children. 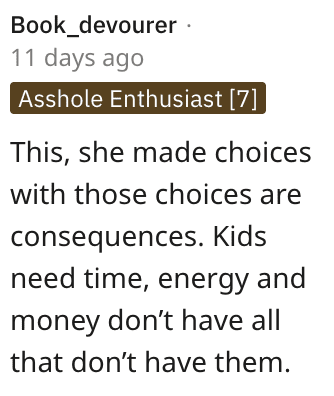 And this individual said it’s not like she’s young and then shared their own experience.