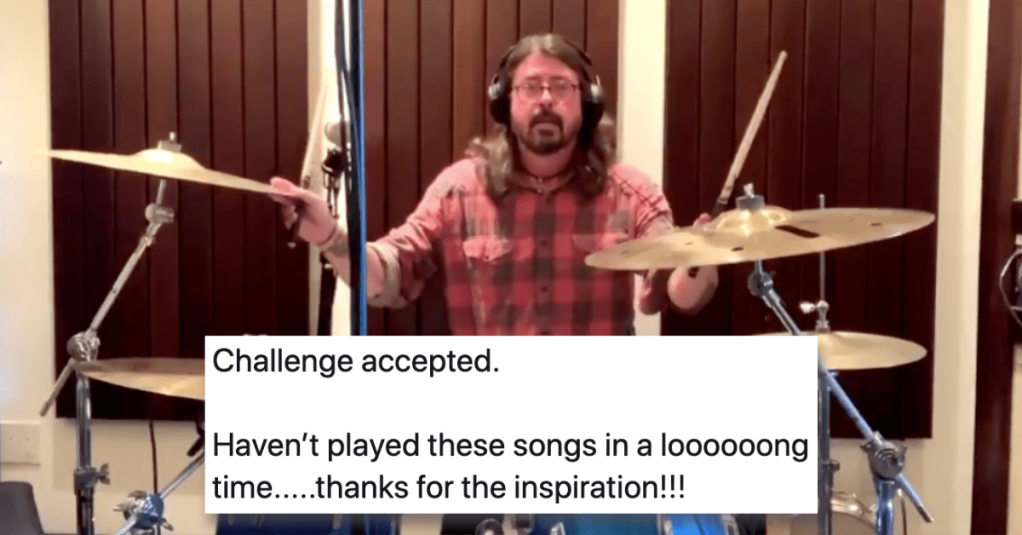 Does Dave Grohl seem like a great guy, or what?

Of course, most of us know him from his time playing in Nirvana and now the Foo Fighters, but he seems to pop up in the news or on social media from time to time because of the funny and wholesome way that he interacts with his fans.

Recently, a 10-year-old girl from the UK named Nandi Bushell took to Twitter to challenge Dave Grohl to a drum battle.

Look at this girl go!

My dream is to one day jam with Dave Grohl, @taylorhawkins and all the @foofighters! Mr Grohl I would love to have a drum battle with you! I LOVE Everlong it’s really hard to play as it’s so fast but so much FUN! #foofighters pic.twitter.com/Pmdhvl57uu

I think it’s safe to say that she probably has a pretty good future rocking out for a band sometime in the near future, don’t you?

Of course, Grohl accepted the challenge from the young girl and posted his own video. And he said that he borrowed his daughter’s drum set for the video. And at the end, Grohl presented Bushell with a challenge to learn a song by another band that he’s in called Them Crooked Vultures.

Haven’t played these songs in a loooooong time…..thanks for the inspiration!!!

Your friend in rock,
Dave

(Thanks to my daughter, Harper for letting me borrow her drum set) pic.twitter.com/Ytq47CcZRC

Bushell was over the moon that Grohl responded.

This is UNREAL! I can’t believe Dave Grohl actually accepted my drum battle, Thank you! Now it’s my turn to learn ‘dead end friends’ by @crookedvultures! I am going to checkmate this one too! Thank you Harper for lending your Dad the kit! @foofighters #davegrohl #foofighters pic.twitter.com/gAyoVYSySM

It seems like the battle is now TOTALLY ON, so you might want to keep an eye on Twitter to see how the rest of this epic competition plays out.

One more thing: keep your fingers crossed that this pandemic is over sooner than later so all of us can get back to going to see live music again. I sure miss it! Don’t you?

In the comments, tell us who you’re excited to see play live when things get back to normal again!