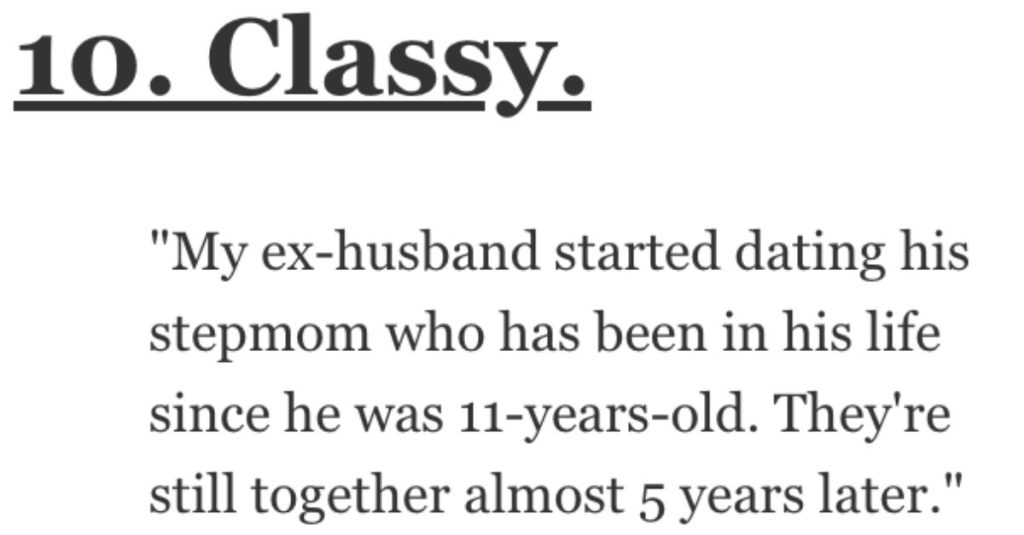 Divorced People, What’s the Craziest Thing Your Ex Did After You Split Up? People Shared Their Stories.

It’s a fact of life: when two people end a relationship, sometimes one or even both of them goes a little haywire.

I’ve never done any stalking or anything too crazy, but I definitely lost my way a little bit in my younger days after a relationship ended…

But today we’re gonna get WILD.

AskReddit users talked about the craziest things their exes did after they got divorced.

“My ex-wife told me I could leave my stuff in our house while I found somewhere else to stay.

I assumed this was a good-will effort to keep things as amicable as possible between us.

When I went to get my s**t she had burned it all. So that was rough.”

“Kidnapped the kids during their weekend visit and moved to a small town in the next state over. It took me 2 years to get them back.

She eventually burned all her bridges in the town she moved to and went home to her parents house. Since her parents were not pleased with her choices and were on my side during the whole deal they called me to let me know where she was. I went and got them.

This was over 20 years ago and they have both grown up just fine. I’ve since remarried and my 2nd wife has been a wonderful mother to them.

It took a lot of work to fix all the damage but it’s mostly ok. The biggest scars that lasted was that my son has a distrust of women with authority (that he has worked really hard to get over) and my daughter was afraid to start her own family because she worries she would turn out just like her mom. She finally got over that and is expecting our first grand baby this fall.”

“She called my company, talked her way up the chain to the president of the company (still don’t know how she managed that, but she’s smart) and told him I was s**cidal and had threatened to “do something drastic” at work…

Later I learned that she thought this would be a roundabout way of getting my address which I didn’t share with her after I moved out because she’s bats**t crazy.”

“Called me and pretended he had been hit by a car while we were talking.

He even tried to voice the crowd that had gathered around his “body.” God-awful acting, but pretty funny listening to him try to mimic a woman’s voice. Points for trying to be inclusive, I guess.

I think he was trying to get me to re-live my trauma of being on the phone with a friend who actually HAD been hit by a car while we were talking. Too bad he didn’t realize that hearing the real thing is worlds different than hearing a dumba** try to act it out.”

“My ex faked jumping from the roof cause I broke up.

He was dedicated though, he actually dropped his d**n phone and then was mad that I didn’t fall for it.”

“Stalked me for 5 years. Would make fake social media profiles to try to follow me (which I would block endlessly) and would try to find where I worked so she could talk to me.

This lady cheated on me with 7 different men 2 months after we were married. I kicked her ass to the curb and made her sign the court papers. When we had our day in court she cried in the judges office while I just wanted to get this s**t done.

After, my dad was with me and he threw 50 dollars at her and told her to “change your f**king last name.” Good guy Pops.

I haven’t seen or heard from her in about 5 years, thank goodness.”

“My ex cheated on me the week my mom d**d in the hospital. She spent a year and a half trying to get in touch with me.

She would call my old work and make fake accounts trying to message me on FB. It was insane. She later sends a certified letter explaining she was sorry that she did what she did and that she aborted our child.

Wanted me to meet her somewhere so she could apologize face to face. She already married some other guy that she had children with and was still trying to get in touch with me. I never understood her.”

“After he realized I was never going back, he told his mom that I had been stealing from the family the whole time we were together.

Then he literally put it in writing that I had a key to his parents’ home and would sneak in and take his dad’s guns and his grandmother’s jewelry, and that he had been powerless to stop me.

It was always his druggie sister. Always. Anyone with eyes could see it, but no one in the family wanted to believe it.”

“After years of telling me she wanted a child, that she wanted to be a mom, that her life’s dream was to be a SAHM, she got pregnant with the first guy she slept with while we were getting divorced and put the kid up for adoption even before it was born.

This was a long standing thing with her, she always wanted something (car, house, dog, cat, marriage, etc) and the second she got it she immediately h**ed it.”

“My ex-husband started dating his stepmom who has been in his life since he was 11-years-old.

They’re still together almost 5 years later. His stepmom confessed her love of my ex to his dad a few years ago and they have since divorced. The dad is now dating a 21 year old.

I know all of this because I’m still close friends with my ex husbands sister.

It’s so messed up and I’m so grateful I left him when I did.”

“When I told my ex-husband I wanted a divorce, the next day after I went to work he packed our entire house into a uHaul and put it in storage. Even with a court order he refused to give my stuff back. I left my marriage with the clothes on my back.

Years later he decided he was above the courts because he got away with that and took our son across country telling me he was moving with one day notice and told me I couldn’t do anything about it. Of course I promptly hired a lawyer and we went back to court and he lost joint custody but it took a year of fighting, chasing him down, and not seeing my son.

There are more stories but those are probably the worst.”

“After I filed for divorce she lost it….

CPS wouldn’t let her kids stay at the house because of the DV charge against her so they stayed at her parents. She purposely stayed at the house so that I couldn’t see my kids. I refused to be alone with her after for fear that she would hurt herself and blame me so I always went to the house with someone if I needed anything.

She got tired of this and decided to just removed everything from the house while I was at work. I mean everything that wasn’t in my kids bedrooms she took out of the house. Curtains, ceiling fans, all of the furniture minus the dining table that I don’t think she had room for. I thought well this sucks but at least she’s gone so I changed the locks.

She broke in and stole the locks the next day while I was at work ( left nothing but the holes in the doors to swing open in the wind ) took the window locks, cut the power cord to the garage door opener. Took the blender that I borrowed from my mom and popped the air mattress that I borrowed to sleep on.

Then she flipped off the main breaker to the house. Swore to the judge that someone else must have done it.”

In the comments, tell us about the crazy things your ex did after you split up.