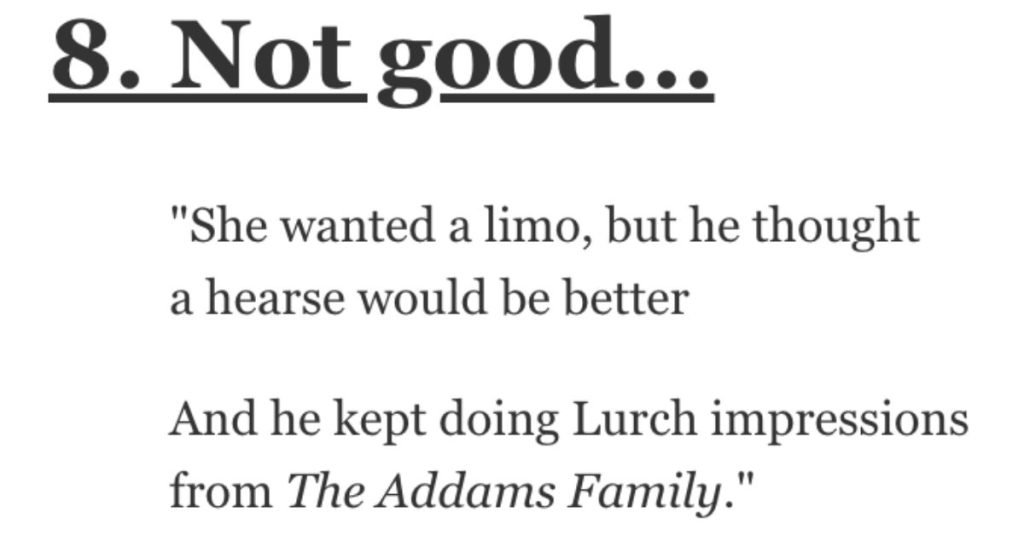 What Wedding Made You Think “This Won’t Last Long”? Here’s What People Said.

Have you ever been to a wedding and it just felt a little bit…off?

Like there was a weird vibe in the air and you have a feeling that those two individuals weren’t exactly “right” for each other?

I know I have…and it’s a pretty weird experience.

People on AskReddit talked about weddings they went to that they knew weren’t gonna last long.

Let’s take a look at their stories.

“Her friends took turns motorboating her (females), and he said, get it out of your system as after tonight you never get to do that again.

Was a good sign also when she dove into the pool with her bridesmaids at the reception…in her wedding dress.”

“Sat down with bride and groom, filling out the contract. Got the deposit. He stood up, said forget it, and walked out.

The officiant was not pleased.

I think they made it a year.”

“One of my good friends got married and I’d never met her before the wedding because “she’s just shy.”

On the wedding day, she was belligerently dr**k before the ceremony even started and couldn’t even get through the lines she was supposed to repeat (i.e. “I promise to love you”).

She ended up slapping the groom, spilling champagne on her dress, and then crying under a table while he tried to comfort her. They lasted about 4 months.”

“My wife’s friend. She’s a very conservative, religious white girl who married a black man. Most of her rac**t family didn’t approve of the marriage and didn’t show up.

But she planned the whole marriage around race. Like a vanilla cake for her and a chocolate cake for him, the wedding colors were black and white, and even the meals were white meat for her side and dark meat for his.

It was extremely uncomfortable as a guest. They lasted 2 years (but broke up because he was a**sive and almost ki**ed her, rather than the weird racial tension).”

The maid-of-honour’s toast consisted of tearful declarations of unrequited love to the groom, along the lines of ‘if it couldn’t be me, I’m glad it’s my best friend that’s marrying you’.

The best-man’s speech was a lusty declaration of ‘if it doesn’t work out, call me, babe… like the previous time you called me.’ Other toasts were similarly weird. A guy at the table I was seated at was a friend of the bride and said to me that he was ‘this close’ to standing up during the ‘speak now or forever hold your peace’ thing.

I’m still not sure if the whole thing was a bunch of emotionally f**ked-up 20-year-olds, or one big piece of performance art.””

“He ended up at the emergency room between the ceremony and the reception.

He went out out the night night before with his sister and friends and got plastered. They had to hold a cold pack to the back of his neck to keep him vertical during the wedding photos.

Marriage lasted 30 days until they had a fight, she left the house and he filled the U-Haul truck with everything but her clothes.”

“She wanted a limo, but he thought a hearse would be better

And he kept doing Lurch impressions from The Addams Family.”

“I was maid of honor. Me, best man and the couple went into a separate little room to do the signing stuff.

Bride excused herself to go the bathroom and the groom started making pretty mean remarks about her cook to the officiary. She came back, heard they were talking about cooking family meals together and gave him the warmest smile, thinking he had praised her.

He scoffed awkwardly and changed the topic. That always stuck with me. He wasn’t laughing WITH her but AT her, behind her back.

“A fun light-hearted dance with the groom followed by a close and slow dance with her male best friend.”

“The groom showed up to his own reception wearing a t-shirt with restroom-sign style stick figures depicting a bride and groom captioned “Game Over.””

“When the bride drank vodka out of a pint glass and spent a significant amount of time making out with another guy on the dance floor.”

In the comments, tell us about the doomed weddings you’ve been to.