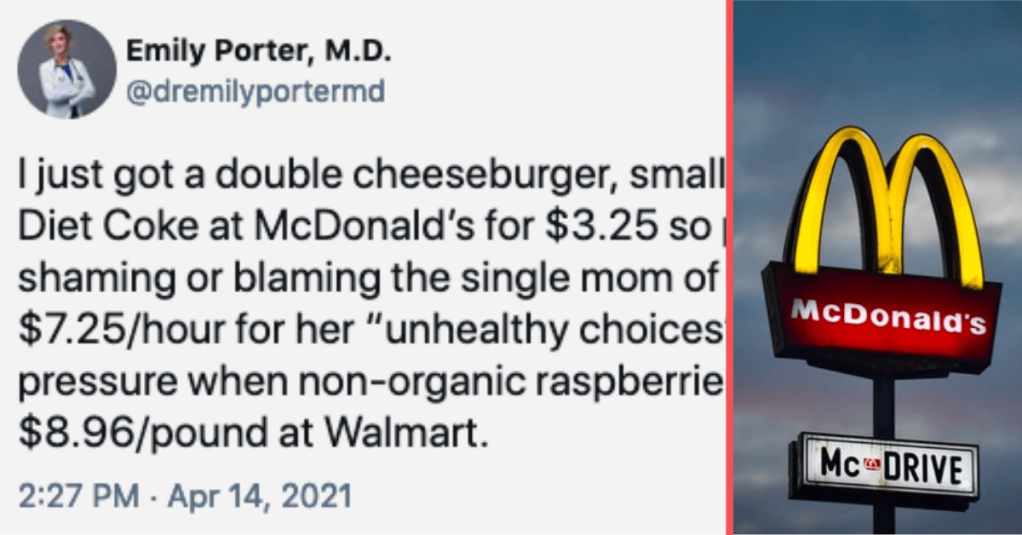 There’s no question that everything, including food, just seems to keep getting more and more expensive.

Add in a food desert, and people are paying crazy prices for fresh food the rest of us take for granted.

So when a doctor tweeted about the relative costs of fast food compared to fresh food, her thread went viral, with lots of people weighing in on both sides.

Emily Porter is an ER doctor and cancer survivor living in Austin, Texas.

When she tweeted about the cost of food, she was urging empathy and asking people not to judge others, but she had to know it was going to be controversial:

I just got a double cheeseburger, small fries and large Diet Coke at McDonald’s for $3.25 so please stop fat shaming or blaming the single mom of 2 working for $7.25/hour for her “unhealthy choices” or high blood pressure when non-organic raspberries are $8.96/pound at Walmart.

But Dr. Porter took the time to explain her background:

Not only did she grow up poor, but she worked on the front lines of poverty, watching others in her community purchase what they could afford at a fast food restaurant.

I’ll also say I worked in fast food. When you see someone destitute finally get enough spare change together to buy a hamburger and then they ask for a big cup of hot water and grab a huge handful of ketchup, you learn quickly what is happening. Heartbreaking, even as a teenager.

She even took the time to explain the food desert in her area, and the fact that people basically only shop at the dollar store.

Just outside Austin is a food desert. The closest supermarket is 15 mi away. Not everyone has a car. 95% of kids in the school district get free lunch. The people buy groceries at Dollar General. They accept SNAP and it’s the only option. What fresh/healthy food comes from there?

The responses to her tweet ran the gamut. Some came with empathy and agreement, others did not.

Apparently some even suggested that the poor should invest in Blue Apron meals, which surprised me, because meal kits tend to be pricey. They definitely cost more than McDonald’s.

Also, for anyone who would snub a poor person for cooking frozen pizza or making a box of mac & cheese, try working 10 hr then cooking Blue Apron which is delivered to your door but takes at least an hour to prep/cook & leaves tons of dishes to hand wash then decide they’re lazy.

But that is the point of such a tweet–starting a conversation that needs to be had.

Some people argued that fast food eaters were lazy:

I can’t agree with that: all studies show that cooking your own meals costs much less than fast food for working class families and is much healthier. You should shame them for their culinary laziness. ??

To which others replied, it’s not just about the money. It’s about the cost of time and labor too.

Preparing healthy food requires money, transportation, time, mental energy, childcare support, cooking knowledge and skills, access to a functioning kitchen and tools, and kids who are willing to eat whatever you make. Not impossible for a family, but often not easy.

Some people even argued that the poor should buy a rotisserie chicken at Sam’s Club or Costco.

Few pointed out that those are loaded with sodium, but some people did point out the absolute tone-deafness of such a suggestion.

You have to be able to afford a membership to Costco or Sam’s and have the transportation to get there.Most of them are suburban and therefore aren’t on bus lines.

The article did note that a UK study disagrees with this assessment, so maybe it’s regional. The UK is very different from the US in a lot of ways, maybe it would generally be less expensive to eat healthier in the UK and not in the US.

Many users, however, completely agreed with Dr. Porter’s assessment of the cost of eating.

My grocery bill has gone up triple since I stopped buying easy food and started eating healthy. And I buy less because I eat less, but the fact remains I spend far more money. It’s ridiculous.

And they pointed out a lot of things that it’s easy to overlook from a privileged point-of-view.

I think many people forget there is a time cost in shopping for ‘raw’ food – they don’t have transportation, storage, lack of childcare. Maybe working 2 jobs and don’t have time to do a ‘good’ shop.

…the fact that just because something is possible, doesn’t mean everyone has the ability to make it work…

THEREs A DIF BETWEEN BEING BROKE AND BROKEN! There are poor ppl;then there r those who’re devoid of hope. Without hope it’s hard as hell to try and keep trying. Think about what you just said – “I was a vegan collage student.” At least you had hope for a brighter future.

…and the simple fact that fast food is easier to chew than, say, a carrot.

Don’t forget the unbelievable cost of dental care and that all this McFood is soft making it possible people with dental problems and missing teeth can still eat.

It’s safe to say that there are no easy answers to this question, but one thing is for sure: it’s a frustrating situation that needs to improve.

What do you think? Does Dr. Porter have a point? Is this system set up to be broken? Let us know in the comments.