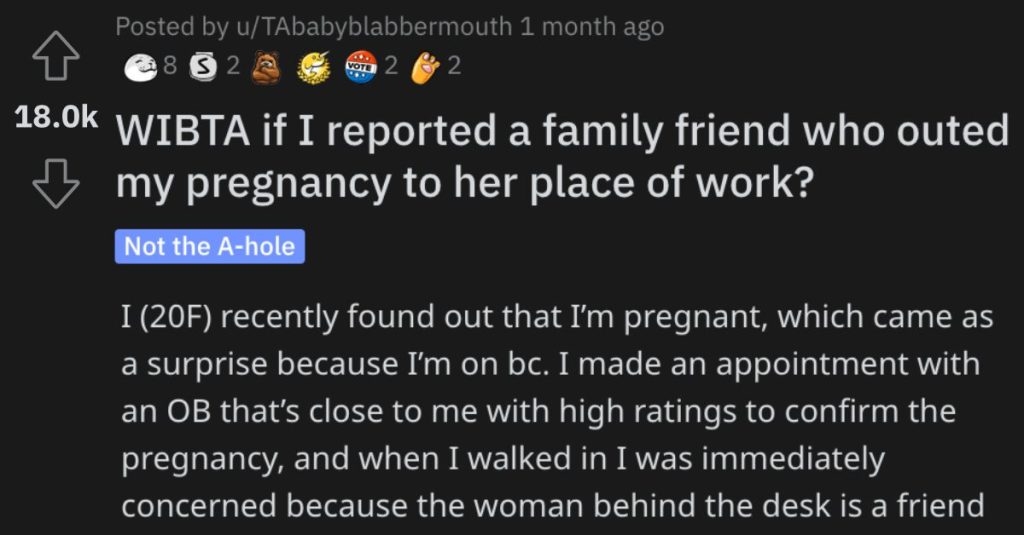 Family Friend Who Works At Doctor’s Office Outs Her Pregnancy, So Should She Report Them?

Call me old-fashioned, but why on Earth would you go blabbing about someone’s pregnancy to other people before they had a chance to break the news themselves?

It just seems so darn rude!

But you know that there are people out there who are rude and don’t have a lot of common sense.

Check out this story from Reddit’s “Am I the A**hole?” page and see if you think they stepped over the line when someone outed their pregnancy.

WIBTA if I reported a family friend who outed my pregnancy to her place of work?

“I (20 F) recently found out that I’m pregnant, which came as a surprise because I’m on bc.

I made an appointment with an OB that’s close to me with high ratings to confirm the pregnancy, and when I walked in I was immediately concerned because the woman behind the desk is a friend of my mom’s.

They’re not super close, I hadn’t seen her in years, but they’ve known each other since high school and I know they sort of keep in touch. I didn’t feel ready to tell anyone other than my bf and obviously dr about the baby, so I was freaking out a little, but my bf assured me that she wouldn’t be able to say anything to my mom about the baby without my consent.

When I got home my mom was waiting for me because she already knew about the baby. Apparently her friend had texted to congratulate her before I could even make it home.

Everything is going to be okay and my mom is being supportive, but honestly I’m p**sed at this lady and I want to report her to the OB. My family is supportive of the baby, but if she had opened her big mouth to someone with a different kind of family, the outcome could have been really bad.

My bf agrees with me but thinks it’s kinda Karen-ish, on the other hand my mom thinks her friend crossed a few lines, but to report her and potentially put her employment at risk would be petty and an a**hole move. I think mom’s friend is an a**hole, and a potentially dangerous one at that.

WIBTA for reporting her big mouth to her employer?”

This reader said that this is a major violation. 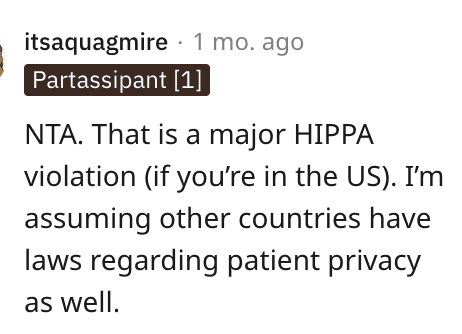 And another Reddit user said that she also stole away a private and special moment for this woman. 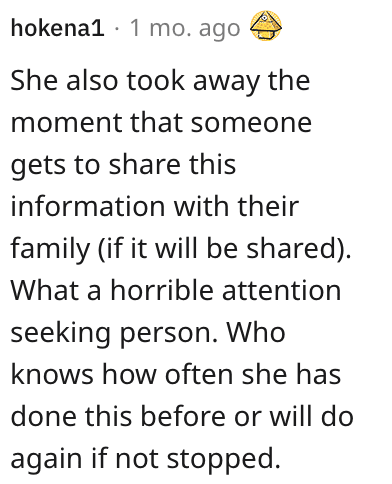 And this individual agreed that she needs to be reported.

Finally, this reader said this woman made a choice and now she has to deal with the consequences. 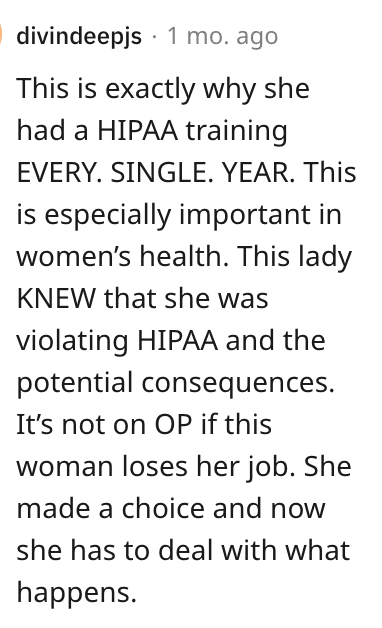