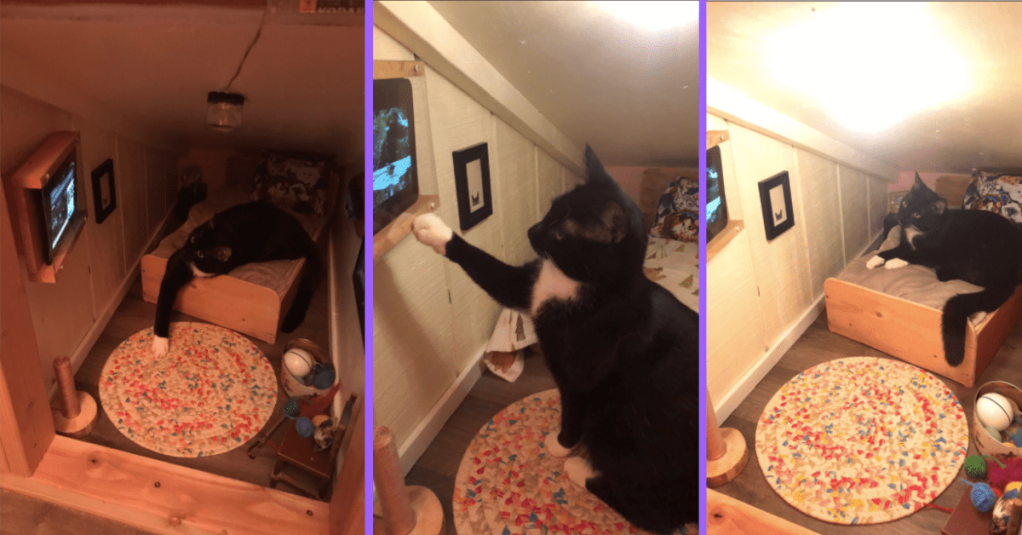 Family takes “If I Fits, I Sits” to a Whole New Level, Builds Pet Cat His Own Bedroom

When I was small I really liked the idea of tiny rooms. Sure, I had a normal sized bedroom. But inside my closet, there was a tiny door.

Where did it lead? (I don’t know. I think it was locked and led to the pipes.)

And even though I had a room of my own, I longed to have a tiny secret room that no one could go in but me.

Turns out, maybe cats feel the same way. It’s a proven fact that cats like containers.

There’s a reason why “If I fits, I sits,” has become a slogan for cat lovers everywhere.

And we all know how they feel about boxes.

If I fits, I sits! Data collected from citizen scientists suggests cats like chillin' in invisible boxes just as much as they do regular ones. https://t.co/FSaPB2lgeR

But could it be that all this sitting in tight places is because secretly, cats want tiny bedrooms of their own?

One family recently found out.

After adopting a tuxedo kitty called Wyatt from a shelter, Bryan Davies really wanted to make the cat feel at home.

His bedroom had a sort of secret, unused cupboard and so Bryan renovated it for his feline friend, complete with cat-sized furniture and pictures on the wall.

Here is the bedroom we finished for our cat this weekend. He actually goes in to nap and watch birds on YouTube 🙂 More pics coming #tinyhome #cats #catbedroom pic.twitter.com/k54OPBVZVG

It’s the perfect, cozy little container for a cat.

And because Wyatt was an avid birdwatcher, they completed the setup with a wall-mounted tablet for watching YouTube videos of birds and other wildlife.

What a cushy pad!

As Bryan told The Dodo:

“He spends a lot of time in there, asking to watch his show before taking a nap.

He zones out to the screen like a normal teen. And he naps — hard.

He really does enjoy it as much as a kid who finally got his own room.”

It kind of reminds me of a favorite childhood story, the Little Golden Book Home for a Bunny by Margaret Wise Brown.

Not only does Wyatt have a nice little room, but he loves boxes like any cat, and his room has a good deal of symmetry going on.

That’s interesting because, according to a recent study, it’s not just containers that cats love.

Ever wonder why they also want to lie down on your laptop, keyboard, notepad, or book?

Today’s edition of “if I fits, I sits” pic.twitter.com/Z2vu3xWqYH

Apparently it’s not just to irritate you.

According to this new study, squares and rectangles, the actual shapes are what often attract cats.

I am obviously here for all the cat research – "a new study has found that pet cats will also spontaneously sit inside an optical illusion that merely looks like a square." https://t.co/rMTDTn9aDK

The researchers found that cats will actually sit inside an optical illusion of a square, because they like squares so much.

It’s fascinating! No wonder Wyatt loves his little room with its little bed and TV.

What do you think about all this? Does your pet need their own bedroom too? Tell us your thoughts in the comments.