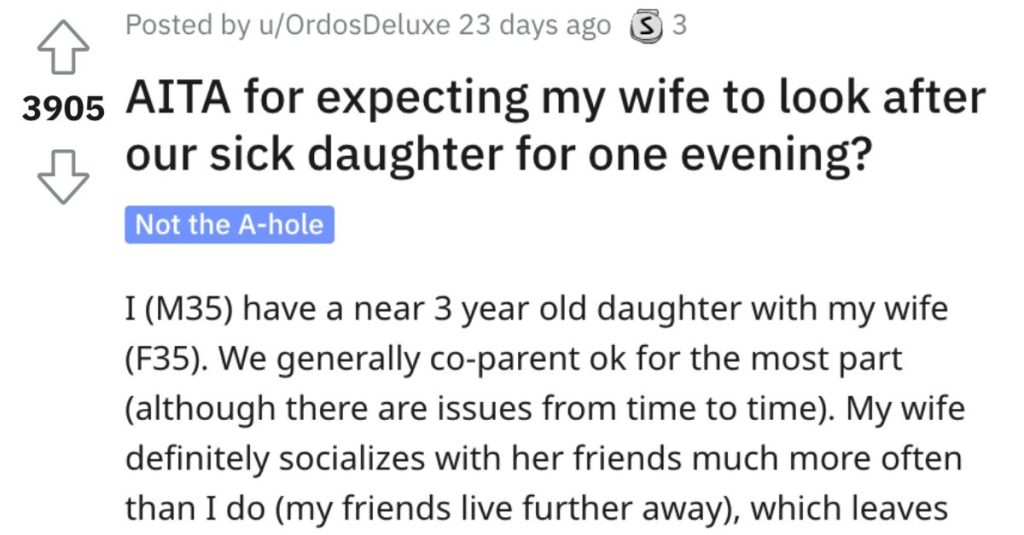 From the title of this story alone, you might be scratching your head a little bit, but that’s why you gotta dig a little deeper, folks!

And by that, I mean read the whole story from a man who asked the good readers of Reddit’s “Am I the A**hole?” page if he stepped over the line when he asked his wife to watch their sick child for a night.

Keep reading to get the dirt…

AITA for expecting my wife to look after our sick daughter for one evening?

“I (M35) have a near 3 year old daughter with my wife (F35). We generally co-parent ok for the most part (although there are issues from time to time).

My wife definitely socializes with her friends much more often than I do (my friends live further away), which leaves me solely responsible for taking care of little one (she maybe has around 1/2 nights out a month, whereas it’s even less for me). This is absolutely ok with me, and I don’t usually text or call my wife during her nights out to try and let her enjoy herself.

Last night I had plans to go to my friend’s house for a gaming night. The plan was roughly to leave at 7, be there for 730, then leave at around 12. When I got to my friend’s, my wife called me to tell me that Little One had been sick. I asked if she was ok, and how they were both feeling. She said ok, and I said that if she gets worse to let me know.

For the next two hours, my wife puts texts and pictures in a shared family group WhatsApp chat, basically telling everyone in the family that LO is sick, and also making references to the fact that “Daddy is out having fun while mummy is holding the fort”.

I felt that this was very unfair and made me look like I’d just ditched them – visiting my friend was a preplanned get together, and I don’t think it’s an unreasonable expectation for the mother of my child to be able to deal with a bout of sickness. If she had developed some more serious symptoms I’d absolutely have come home immediately, but this wasn’t the case.

It eventually got to 10PM, and she texted me saying that Little One had fallen asleep. I said that’s good, you can put her to bed now. She responded “I don’t want to move her, if she’s sick it’ll take two of us to change her bedding”.

So she never explicitly said it, but this was basically her telling me that I needed to come home. So after getting 2 hours (most of which was spent checking texts and messages), I apologised to my friend and went home.

When I got home, not only were both of them in bed, but my wife had taken the liberty of plugging in the monitor on my bedside table. Inevitably LO got up a bunch of times during the night (which I’d have been fine dealing with after I had gotten home at my planned time), but I dealt with almost every wake up last night.

This morning my wife asked me why I was in a bad mood, I said she should be able to manage one night without me, even if she was sick. She said that I was selfish and that I needed to re-evaluate my priorities.

I told her that I go out of my way to ensure she isn’t overly bothered or disturbed on her nights out with friends when I’m the one taking care of LO, but she said it wasn’t a comparable situation.

AITA for insisting to her that it’s not unreasonable for me to expect she can handle a little bout of sickness with little one, when she’s the one in charge for the evening?”

This person said that this guy is not an a**hole but his wife sounds very passive aggressive. 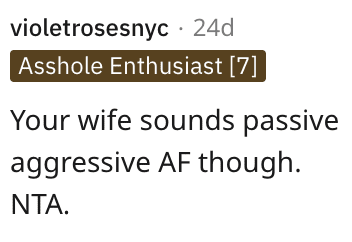 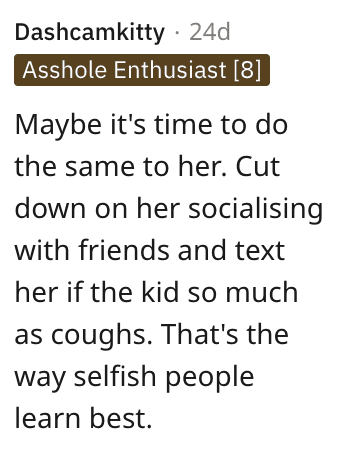 Another individual said that this guy needs to call his wife out about this stuff before it’s too late. 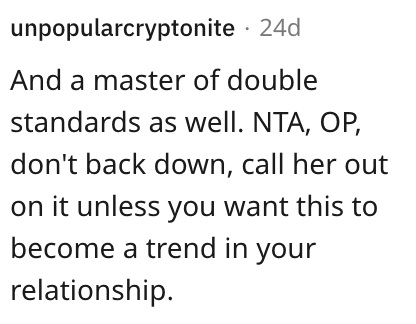 And this individual said that the man’s wife displayed sh**ty behavior. 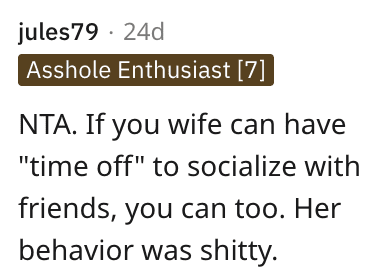