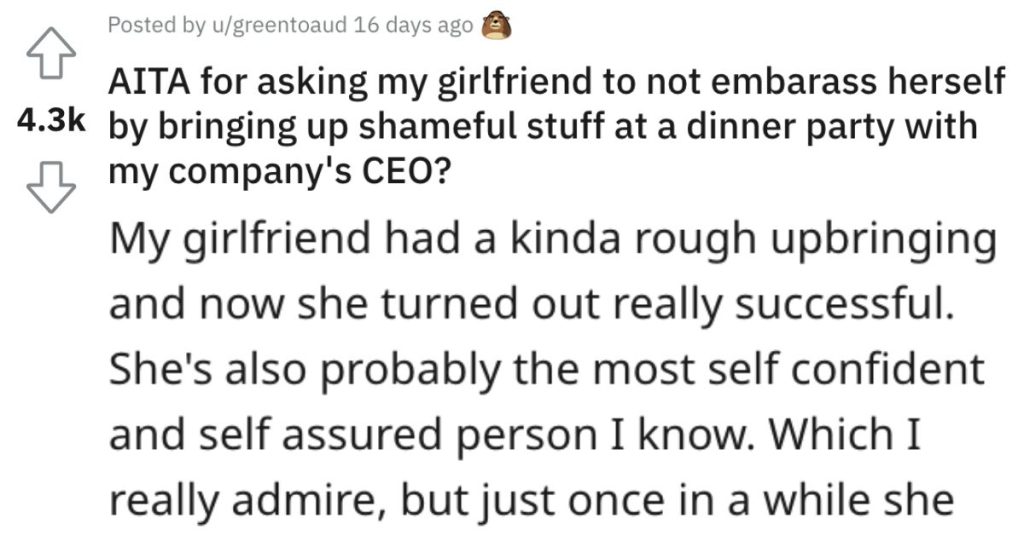 If you say something like this to someone, it never ends well…

Maybe they needed to hear it and maybe you thought you were doing the right thing, but it hurts a lot of feelings…

Check out this story and see what you think.

AITA for asking my girlfriend to not embarrass herself by bringing up shameful stuff at a dinner party with my company’s CEO?

“My girlfriend had a kinda rough upbringing and now she turned out really successful. She’s also probably the most self confident and self assured person I know. Which I really admire, but just once in a while she says stuff that’s socially uncomfortable.

For example, we were going to a dinner and my friend kept apologizing for her messy car. My girlfriend said “Girl, I grew up in a hoarder house and I’m in the middle of shoveling s**t out of that house, there’s nothing on earth that could disgust me anymore!”

And while that’s true, it was kinda an uncomfortable overshare.

Another time, her coworker was talking about how their kid was really shy and she didn’t know how to help. My girlfriend was like “Give her time, I’m sure she’ll grow into herself. I didn’t talk to anyone in school, literally like I had no friends if you’ll believe it!”

One last time, my girlfriend and I were at a networking event, and one of my coworkers joked about how my girlfriend she should enjoy grabbing thirds of food when she’s young because she can’t eat like that forever. Without missing a beat, she said “Oh, I don’t think about food restriction like that anymore, it’s an eating disorder trigger! Anyway I’m trying to bulk up.”

Anyway, we had a big argument about it. We were invited to a dinner at my company’s CEO’s house this coming weekend along with a few peers.

I asked her to not share anything uncomfortable there. She asked what I meant and I gave her the same examples. I told her that that kinda shamelessness about stuff most people find shameful is awkward.

She was like “But it’s not really shameful? Like I got over that self hating s**t. And renovating and flipping a house? So many of your coworkers talk about that.”

I said it wasn’t the house flipping, it was the fact that it was her family home and it was a hoarder house. And it was weird to shamelessly talk about having no friends and an eating disorder.

She was like “That stuff is in the past, why would I be insecure now?”

I got exasperated and asked her to just not share stuff that most people would be embarrassed to say at the dinner. And she got angry and said that it sounded like I thought her whole life is embarrassing, so should she shut up?

I said no, just talk about current stuff? Like you just got a promotion, traveled to Europe, bought your dream car?

I’m still worried about how this dinner party will go, and I’m questioning whether I f**ked up by saying something.

AITA for asking my girlfriend to not embarrass herself at a dinner party with my company’s CEO?”

One reader said this guy is an a**hole and his girlfriend sounds amazing. 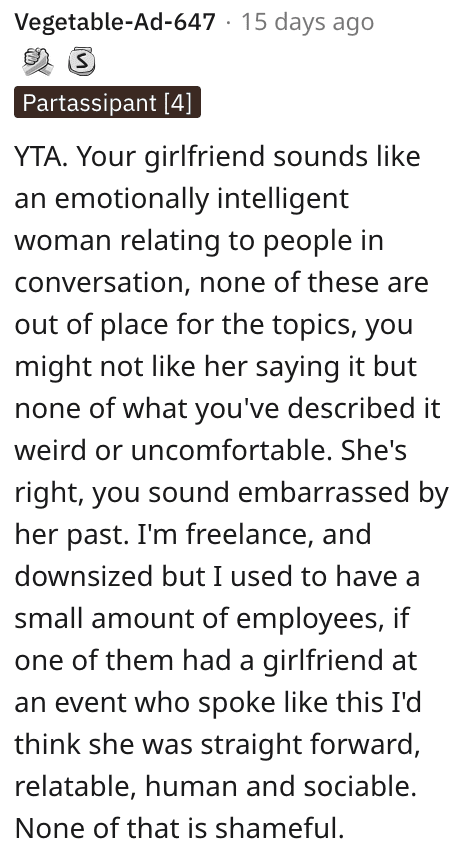 And this Reddit user agreed and asked why he would be embarrassed by her. 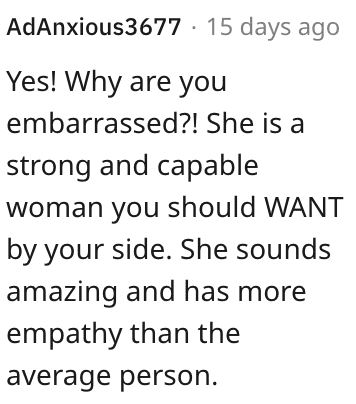 Another individual said it sounds like this woman is WAY too good for this guy. 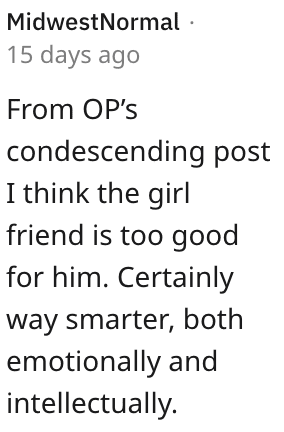