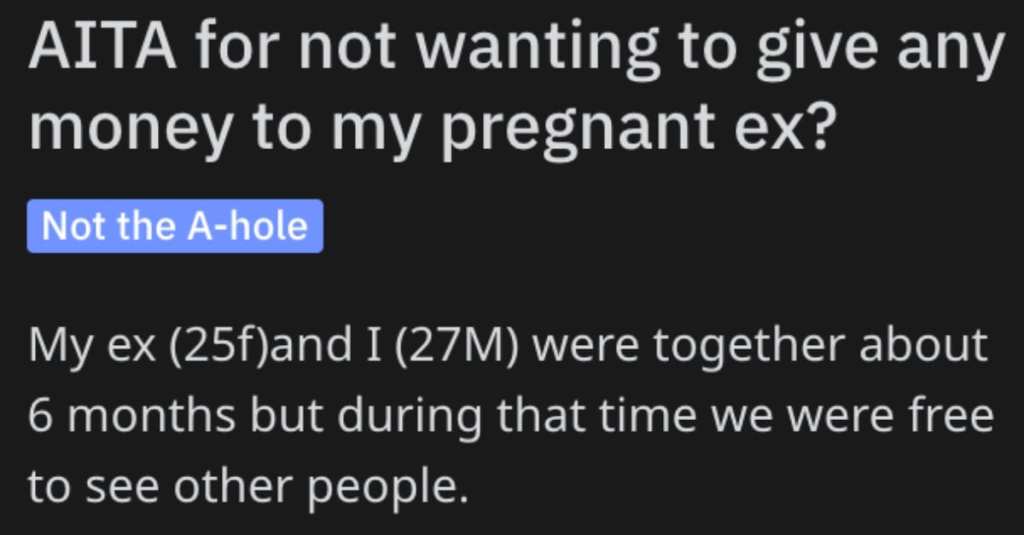 Guy Doesn’t Want to Give Any Money to His Pregnant Ex and Wonders if He’s a Jerk? Here’s What People Had to Say.

Uh oh…I have a feeling that this story is gonna contain a whole lot of drama.

Which is good if it doesn’t involve you, I suppose…

A man in his twenties shared his story on Reddit’s “Am I the *sshole?” page because he’s having some inner turmoil about a situation involving his ex girlfriend…and some money…and a baby…

AITA for not giving money to my pregnant ex?

“My ex (25f)and I (27M) were together about 6 months but during that time we were free to see other people.

Things weren’t working out so we broke up. Over a month after that she finds out she’s pregnant and tells me baby is mine. But I already knew she was seeing other guys so it was also possible the baby isn’t.

She got mad that I was having doubts but I said if we got a paternity test and it showed I’m the dad then yeah I’ll 100% be involved.

My Ex didn’t want that and she’d rather wait until after the baby is born to get a test done so I said that’s fine, it’s her choice. But I won’t get myself involved unless I know the baby is mine.

Like I already know I could be set up for child support if I start helping out now and then later it’s revealed I’m not the father. (I live in the US and have heard this stuff happens a lot)

I’d rather not even risk it you know?

She’s about 8 months now and I have started saving up money, reading up some books, making shopping cart lists of baby clothes and furniture to buy incase I am the father so it’s not like I’m not preparing for this at all.

So right now money is tight with her since I know she’s only working part time. She doesn’t have the money for a baby bassinet or clothes because she practically lives paycheck to paycheck.

She started asking to let her borrow money for baby stuff but I’ve told her no. Far as I know she doesn’t have other family she’s close to and friends are the same as her with money.

But I already said I’ll start giving her money and helping out once I know her son is mine. Otherwise I’d rather not get involved. I’ve even told her to reach out to the other guys who could also be the dad’s but she said one is even more broke and the other she hasn’t been able to contact.

So for right now seems like I’m the only one actually able to offer financial support.

We have a couple mutual friends and I’m getting sh*t from them because they know I have the money to help out. She could be the mom of my kid so the least I could do is provide.

They say they would if they had the money, since I do have the means and this baby could be mine I should already be helping.

They have a point. The baby could be mine and I’ll be happy to help out…once I know he is in fact mine. But everyone else is seeing it as I’m being too cold and inconsiderate.

This person stated the obvious: this guy doesn’t owe her any money until she can prove he’s the father.

Another reader said that this man needs to insist on a DNA test and not give up a cent until it’s proven that he’s the father. 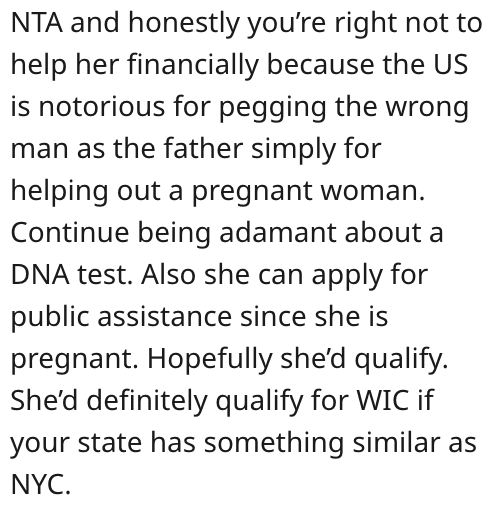 This individual argued that this whole situation is very suspect and that if it’s not his kid, it’s not his responsibility. 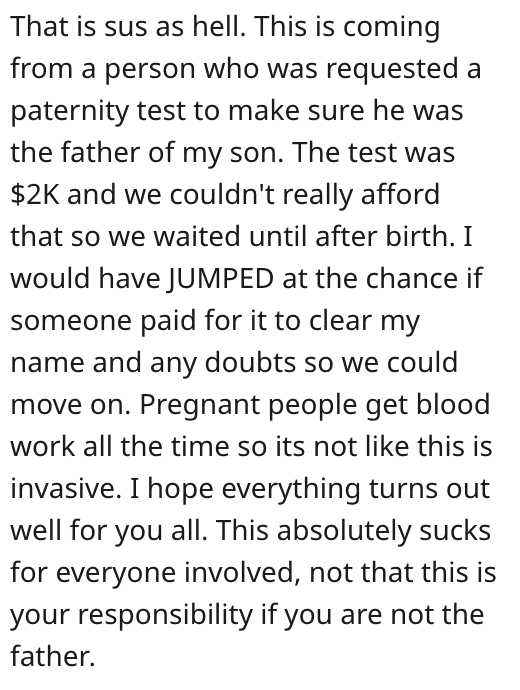 Finally, a person said that it seems like the woman has latched on to him because she knows he has some cash. And it’s pretty telling that she has refused to get a DNA test… 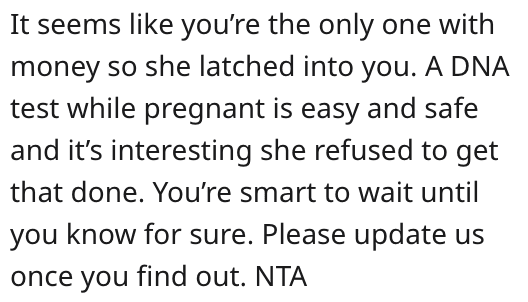 Okay, now we want to get your opinion.

In the comments, tell us what you think about this situation.