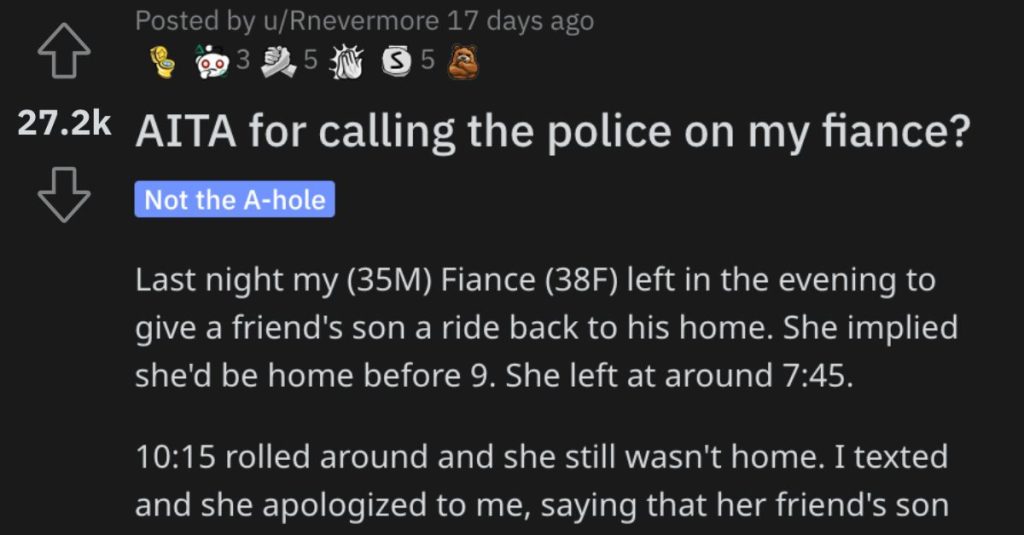 He Called the Cops on His Fiancée. Is He Wrong?

But this guy probably had his reasons, right?

Let’s get all the details in this story from Reddit’s “Am I the A**hole?” page.

AITA for calling the police on my fiancée?

10:15 rolled around and she still wasn’t home. I texted and she apologized to me, saying that her friend’s son was actually in the next town over (maybe 30 minutes away) and she was coming home now.

11:45 rolled around and she still hadn’t come home, so I called her to no answer. Texted her to no response. I was getting very upset

12.30 rolled around and still no response and no answer to my phone calls. I was extremely angry.

1:30 rolled around and my anger had completely transformed into worry. Not answering my calls and texts not read.

Around 1:45 I called the police. I have always heard that the first 24 hours of someone being missing is the most important, so I didnt want to delay. I asked them to let me know if there had been any traffic accidents involving her car, and the operator told me that they would put out the word and send some cops to check along the route she would travel.

I called all the hospitals in the area to check if she has been checked in and I waited outside watching the road for her car for three hours, partially because I didn’t want the kids to hear me on the phone with hospitals, and secondly because I was sick with worry.

At 7:00am she came home. She apologized for being out and said she had no excuse. She was driving home and felt tired like she was falling asleep at the wheel, so she pulled over to the side of the road to sleep. When she did that, she found that her brand new phone had stopped working. She says she napped anyway because it was the responsible thing to do, and then came home at 7am to bring the kids to school and get to work on time.

I immediately called the police and told them that she had come home safely and gave them the case number and told them to stop searching, which they did.

My fjance brought the kids to school and left for work. I set out to start cleaning (cleaning destresses me sometimes), and I got a call from a policeman asking where she worked. I told him, and asked why, and I was informed that it was their policy to check on the person’s wellness after a missing person is found. I asked them to not go by her work but to give her a call instead. He said he couldn’t promise.

My fiance is relatively new to her job. A police officer showed up and asked to speak with her. She is now enraged at me for calling the police and ‘sending a cop to her work’ and making her look bad. She is saying I overreacted and that she wasn’t missing and that I was punishing her for doing the responsible thing and not driving while drowsy. She is saying that she is never going to leave the house again except for work, because she is afraid I’m going to call the cops on her again.

So did I overreact? Should I have waited two days like she suggests?”

This person said he’s NTA…but they think she’s lying to him. 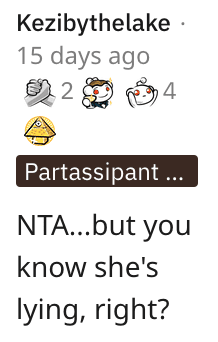 And this reader said her whole story is a lie and they laid it all out. 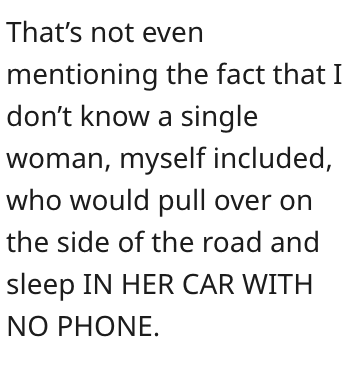 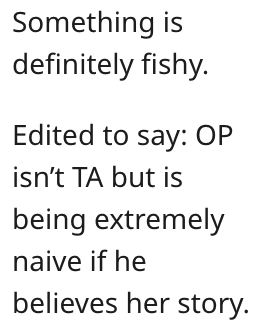