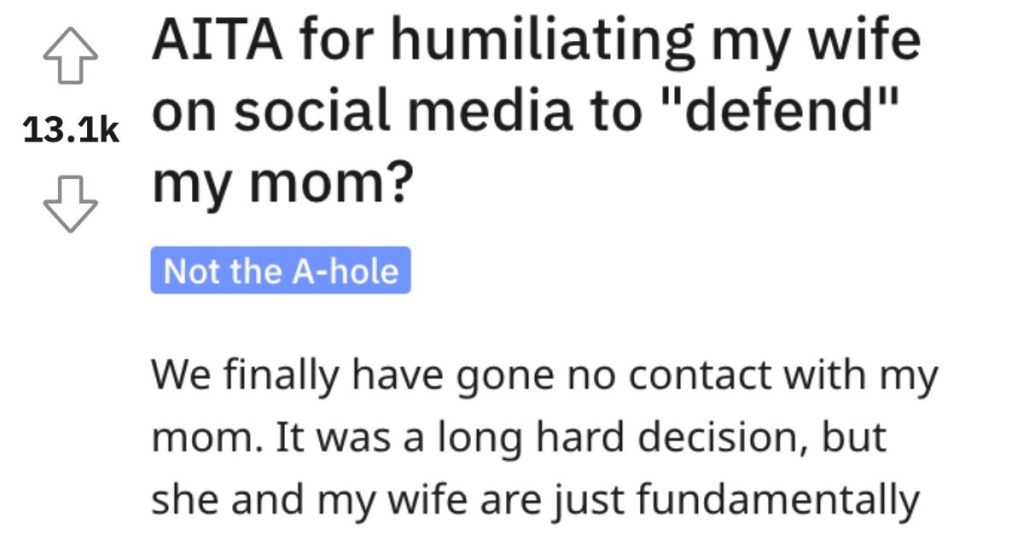 He Humiliated His Wife on Social Media to Defend His Mom. Was He Wrong?

But that’s what’s going on in this story from the “Am I the A**hole?” page on Reddit.

Take a look at the story below to get all the details!

AITA for humiliating my wife on social media to “defend” my mom?

“We finally have gone no contact with my mom.

It was a long hard decision, but she and my wife are just fundamentally unable to get along and recently had a vicious fight, and I knew I had to put my wife first. This fight was so bad my mom didn’t even protest the no contact. We are just done with each other, but I can’t say it hasn’t been gut wrenching.

My mom has given her version of the story to everyone, so I get that my wife wants to defend herself, but I h**e that she is posting on social media because I find that tacky, and my mom just told people verbally.

Anyway my wife made a couple posts about my mom’s behavior over the years, which hey they were true, but then she claimed my mom wore white to our wedding (she didn’t) and she posted a picture to prove it. This picture is not from our wedding. It is from my mom’s own wedding, and my wife labeled it the mother son dance.

I was mortified. I don’t even care about the white dress, but the man my mom was with was her husband not me (face was cropped out), and I felt humiliated. He was holding her very intimately, hand on her lower back, her head buried in his chest.

My mom and I would never ever touch like that and it made me feel ick. Hell my mom was stiff during the actual mother son dance. I know some families are more affectionate, but I would just never do that. I asked my wife to take it down and she refused.

I took it into my own hands and comments “honey think you are confused. That’s *stepdad’s name* remember that was their wedding. She actually wore green to ours” and posted the pictures for proof.

My wife was furious and deeply hurt. She broke down crying and said I publicly humiliated her and sided with my mom. She said she just wanted a little bit of petty revenge and I should have taken her side. It’s been a day and she is still clearly upset.”

One person argued that he’s NTA and that his wife humiliated herself. 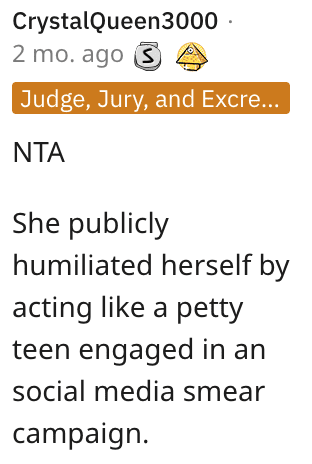 Another individual agreed and said what his wife did was high school bulls**t. 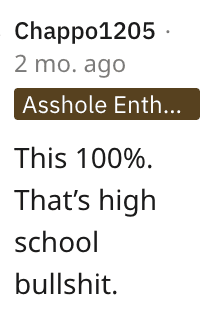 And this Reddit user said he’s NTA and that people shouldn’t air their dirty laundry. 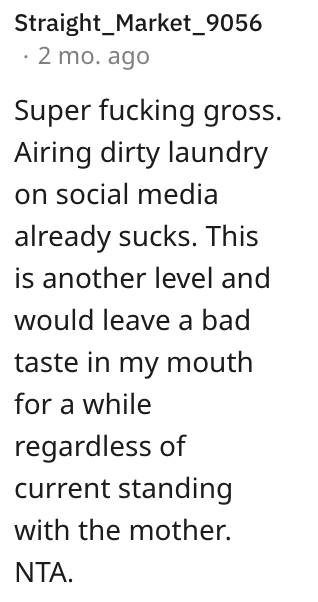