She Didn’t Give Her Stepdaughter the Same Gift She Gave Her Children. Was She Wrong?

Not all kids do this, but I think it’s safe to say that some kids get upset and all worked up when they don’t receive the same presents or something on the same level as their siblings do…

Which I guess makes sense, right?

Read on to see what happened and let us know if you think this woman acted like a jerk.

AITA for not giving the same gift to my stepdaughter, when I give it to my children?

My ex-husband and I are in a good financial position and we agreed after the divorce that on each child’s 18th birthday, we would give 3 gift options and they would have to choose: 1) a car (value up to 20k – fictitious value); 2) A trip or 3) We would furnish the house they were living with. Me and my ex paid half/half.

Recently, my youngest son asked for a trip.

I met Ruby when she was 9, my wife has 50/50 custody and since we got married and lived together I have a good relationship with Ruby.

My wife and her ex-husband are not in such a good financial situation, and I pay 70% of the household expenses.

My youngest son came to visit me this week and he started telling me that he was planning to visit various countries in Europe. And at some point, he mentioned that he looked forward to being 18 years old to get this gift just like his sibilings, Ruby head.

I was a little embarrassed, but I tried to explain that this was an arrangement between me and my ex-husband and we have been collecting this amount for almost 10 years for each child. And that I hadn’t talked to her mother about it. But I made it very clear that if their parents agreed, we could share and have a nice party.

She looked disappointed, but said it was okay.

Well, my wife found out and started yelling at me, saying that I shouldn’t have made my favoritism clear to her children and that it was mean to say that to her daughter, knowing that her parents are not so financially able. And now Ruby is asking her parents to help and saying that I would too. She said that now I should have tô pay 60% of the party since I came up with the idea.

I said that I didn’t know about the plans or whether they had Ruby turning 18, as they decide Ruby things between them alone. And I pointed out that even though I love Ruby, I pay 60% of the party (money I don’t have), it’s not very fair, since she has her parents. Besides, my children’s gifts were years gathering to give and now at that moment I had nothing saved for it.

My wife is complaining about favoritism, but I really don’t think that’s the case. Ruby is angrier at her parents not me.

One person said her new wife sounds very entitled and that she’s NTA. 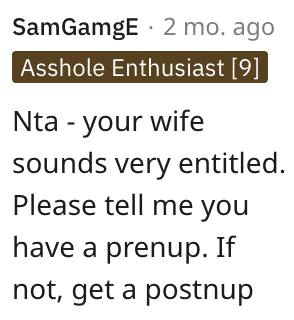 And this individual said they think people’s biological kids SHOULD be favored. 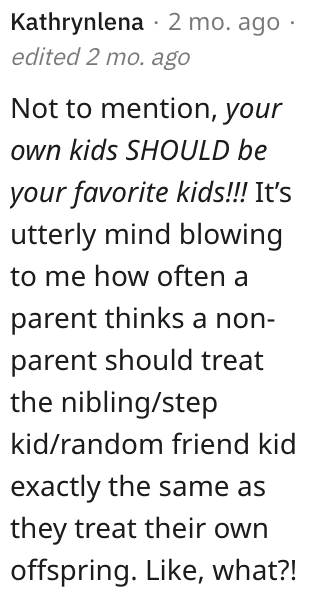 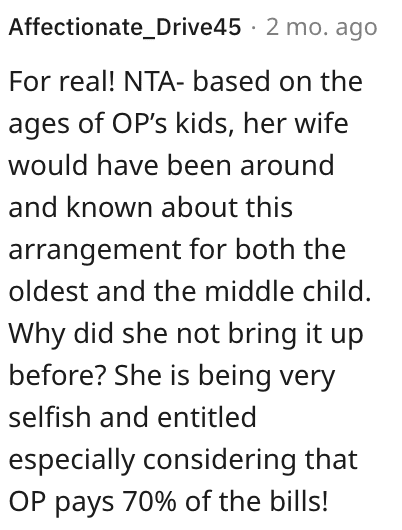