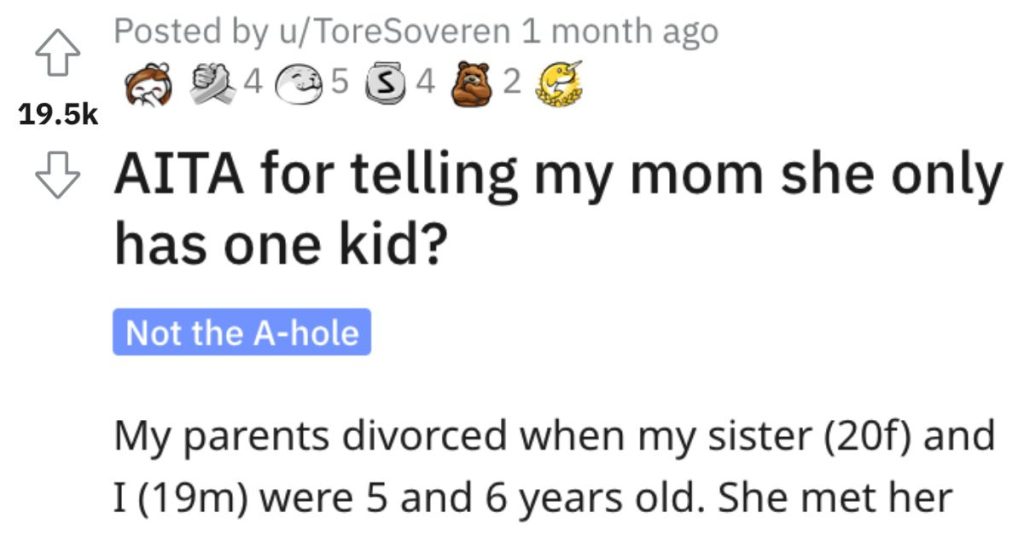 He Insulted His Mom and Told Her She Only Has One Child. Did He Go Too Far?

Anytime a parent is insulted like this and their feelings are hurt, you know there’s gonna be trouble.

But did this guy go too far?

Read his story below and let us know what you think in the comments.

AITA for telling my mom she only has one kid?

“My parents divorced when my sister (20f) and I (19m) were 5 and 6 years old. She met her husband three years later. He was a widower with a 7 month old son (I think he was 7 months old when they met).

She instantly moved them in and started claiming his son as her own and raising him like us. She got engaged to him and a few weeks before the wedding our dad died. By this point my mom had just become estranged from her entire extended family. She told my dad’s parents that if they wanted to see us again soon, they would need to come to her wedding and watch all three of us (including my stepbrother).

She then told them after the wedding that going forward if they wanted to see us, or spend time with us, they had to include him. They hadn’t wanted to. They tried to argue for time with just us. Offering to pay for it all 100%. But mom said no. She said they needed to come to the house and make an effort with all three and not just take two with them.

My sister and I would argue with mom over one day in particular. My dad’s birthday. We celebrated that every year with dad’s family after he died, but she wouldn’t even let that day be just us and them. Our stepbrother had to be there.

She said they did not get to be just our family and we shouldn’t see him as any less deserving of being present. But we did. He was not our dad’s kid, and had never met him. So why was he deserving of being there? I never got that. She called us selfish for the mindset.

Last year I turned 18 and I moved in with my girlfriend. Once I left home, my stepbrother was no longer invited to anything to do with my dad’s family. He no longer saw them. My sister and I also stopped spending any time at mom’s house. Then we stopped speaking to them at all.

It was quiet for several months and then last week mom showed up where I work and demanded we talk. She told me how she was tired of one of her kids being left out and how sick was it to discard him that way, and why weren’t my sister and I advocating for him. I told her she only had one kid, her stepson, and that my sister and I were no longer her kids and my family were no longer forced to include him to see us and that it was all her fault for forcing it in the first place.

Then I wished her luck, which was kinda sarcastic not gonna lie, and then asked her to leave. She texted me later that night to say she had been a good mom to all three of us and to say she only had one kid was low.

This person said he’s NTA and he’s been trying to talk to his mom about this for years. 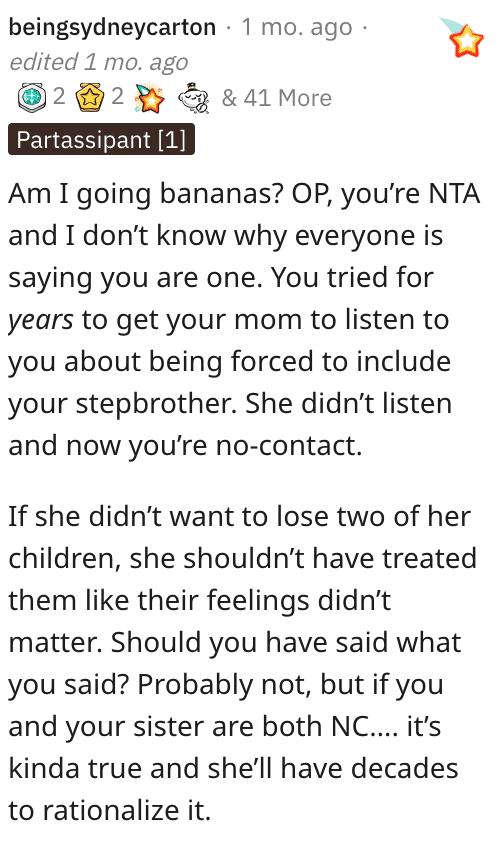 Another reader said the mom is the a**hole in this story and that his grandparents were saints. 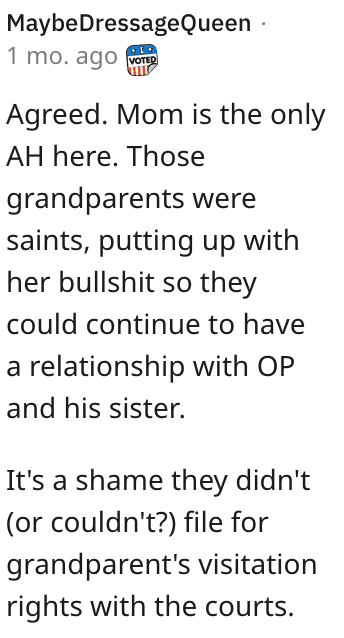 And this Reddit user said the mom is to blame here for trying to force relationships.