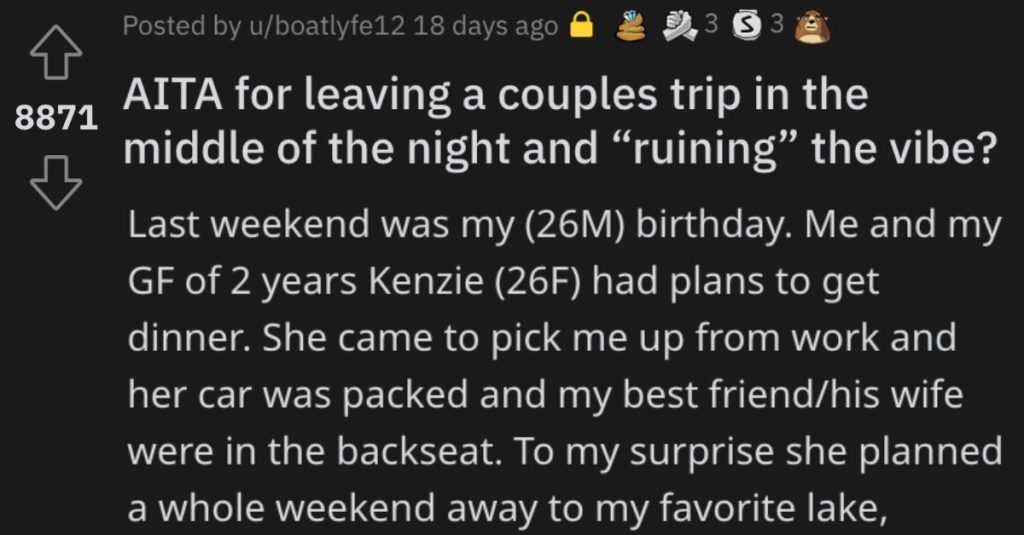 He Left a Couples Trip in the Middle of the Night. Is He a Jerk?

I wish that was a TV show because I’d definitely watch it!

But for now, we’ll have to settle for this story from Reddit’s “Am I the A**hole?” page.

Take a look at what happened!

AITA for leaving a couples trip in the middle of the night and “ruining” the vibe?

Me and my GF of 2 years Kenzie (26F) had plans to get dinner. She came to pick me up from work and her car was packed and my best friend/his wife were in the backseat. To my surprise she planned a whole weekend away to my favorite lake, rented a sick house on the water and invited all our friends.

Her sister/husband, my friends/their SO’s and a few of Kenzie’s friends all arrived Thursday night. It was an awesome and I was stoked for the weekend. We met thru my best childhood friend Grace (26F). Grace and kenzie were college friends and I never thought I had a chance. Kenzie is beautiful and while I’m not ugly, I’ve always felt like we weren’t in the same league. No idea how I got her and I still don’t.

Thursday night went well. Friday we swam and hung out at the house most of the day. We started drinking and playing games at night. Kenzie’s sister broke out this couples game. Basically you pick one person in the relationship that fits the description or it has prompts to engage in debates between couples. Kenzie was pretty dr**k by now because she’s a lightweight and was drinking most of the night.

It was fun till a question of “What originally attracted you to your SO”. Kenzie blurted out “he was safe. And I knew he wouldn’t cheat or leave me.” I looked at her with a face and was like “huh”. She then says “yeah you seemed nice enough and after my abusive ex I wanted a safer option”. Things got really awakened and her sister quickly read a different card.

I was really embarrassed and flustered so I said I had to pee and walked outside. I called Grace to tell her what happened (she was working and couldn’t come) and she got upset. I told her I wanted to leave. She said I didn’t need to take that and she would be there in the morning to get me.

The night d**d down and kenzie tried talking to me in front of everyone but I told her we’d talk about it another time. I decided to pack my bags and sleep on the couch. And before anyone woke up I left. I texted Kenzie and told her that I didn’t want to fight about what happened and ruin everyones trip. So I was going home for the weekend and we could talk whenever she got home.

She blew my phone up all Saturday as did a few of my friends. I decided to go golfing and just turn my phone off. I just didn’t want to talk to anyone. When Kenzie showed up at my place Sunday she was fuming. Saying that me leaving early ruined the whole trip. It was all anyone could talk about. And the whole vibe felt off because the birthday boy was gone.

That she felt like a POS and I didn’t give her a chance to explain. And she hardly even remembers what she said to begin with. She rented a boat (I love boating) and felt like I disrespected her efforts/money to put together the trip. I told her that I didn’t feel like arguing so I went home to avoid the drama. Some said that it was an AH move to just bail and I should have stayed because she did put a done of effort into the trip.

This person said this guy is indeed the a**hole in this story and that it sounds like he really over exaggerated.

And this reader agreed that he’s the a**hole and said he needs to apologize to his girlfriend for his actions. 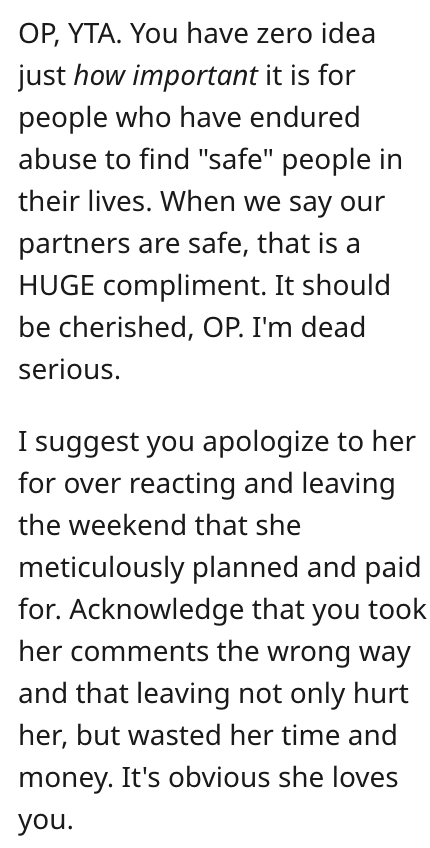 And this individual said he overreacted because he’s insecure about being with his GF. 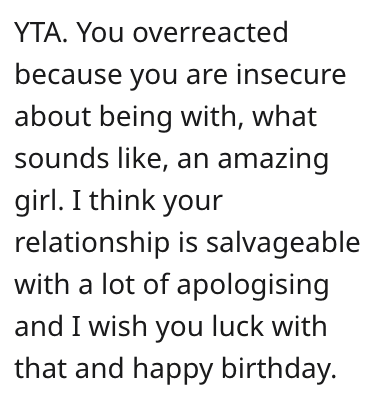