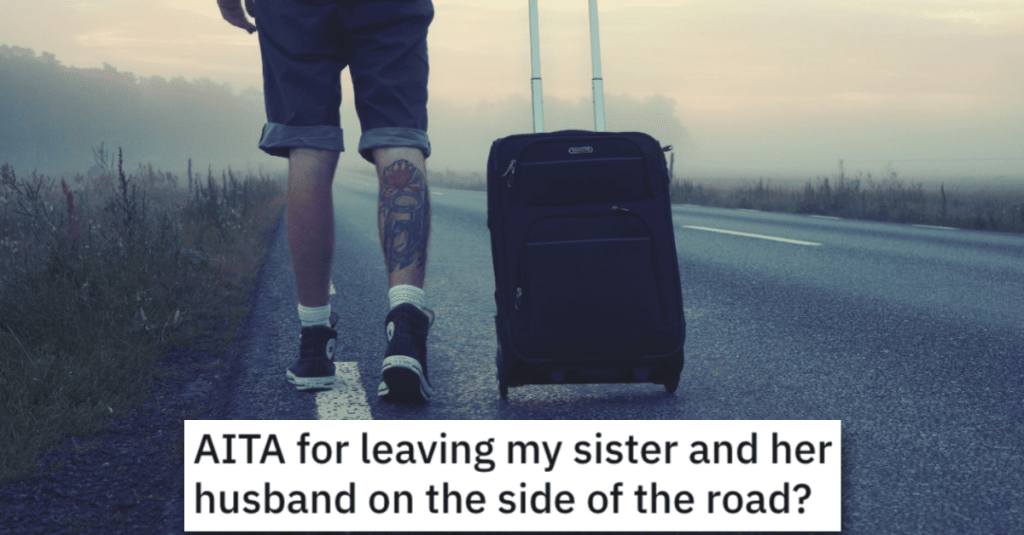 He Left His Sister and Her Husband Stranded on the Side of the Road. Was He Wrong?

Have you ever left someone stranded on the side of a road before?

Yeah, neither have I…

Read on to get all the details below and let us know what you think in the comments.

AITA for leaving my sister and her husband on the side of the road?

“I come from a very “s**-positive” household.

My parents taught my sister and I about s**, s**uality, and their “non-vanilla” lifestyle from a young age. They were very affectionate and touchy with each other in public and didn’t (and still don’t) seem to care about others opinions. They lived a very… non-conventional lifestyle and weren’t afraid to flaunt it.

On one hand, my parents never treated s** as a shameful subject, therefore, I received a very comprehensive, inclusive, form of s** education. On the other hand, I think I was introduced to many topics at a very young age.

In many ways, my sister, “Angie,” turned out like my parents. She proclaims that she’s “s**-positive,” and has no qualms with openly discussing s** in great detail at every opportunity. She believes that if a person is uncomfortable, they must be a “conservative virgin/prude who clearly h**es all forms of self-expression.” (her words).

My wife, “Zara,” isn’t a huge fan of PDA. Other than hand-holding or occasional kisses on the cheek, she isn’t comfortable with doing much in public. We’re also not the type of people to discuss our s**-life with people, much less family.

Angie doesn’t like Zara. She believes that Zara is too “conservative/prudish” for our family. She often makes fun of Zara for “looking embarrassed,” when she’s discussing, in excruciating detail, about s**. Zara barely says anything, but Angie still manages to make fun of her.

I don’t speak to Angie much.

Recently, Zara’s brother passed away. Angie’s husband, “Bill,” knew his partner and wanted to pass on his condolences. Zara, Angie, Bill, and I all wanted to attend his wake. Instead of taking separate cars, Angie suggested that we all go together.

To be honest, I was not a huge fan of this idea. It was a two hour drive from where we live to our destination. Also, we were planning on leaving very early so that we could help set up and were planning to leave late. We still managed to do it.

At first, everything was alright. Understandably, no one was speaking in the car and it was very quiet in the car. Most people were keeping to themselves or sleeping.

Midway through the drive, Angie and Bill start making out in the backseat of our car. When I say “making out,” I mean, full-on, making out. They were pushing up against the car door and making all sorts of noises. Zara and I were extremely uncomfortable.

I yelled at them to get out of my car. At first, they were protesting, but I was so angry and so tired of them already. I told them to find their way home by themselves.

My parents think that I went too far with them and that Zara needs to “loosen up,” in order to be a part of this family. Obviously, Angie and Bill are still extremely p**sed.”

Check out what people on Reddit had to say.

This person said he’s NTA and that nothing his sister is doing is actually s**-positive. 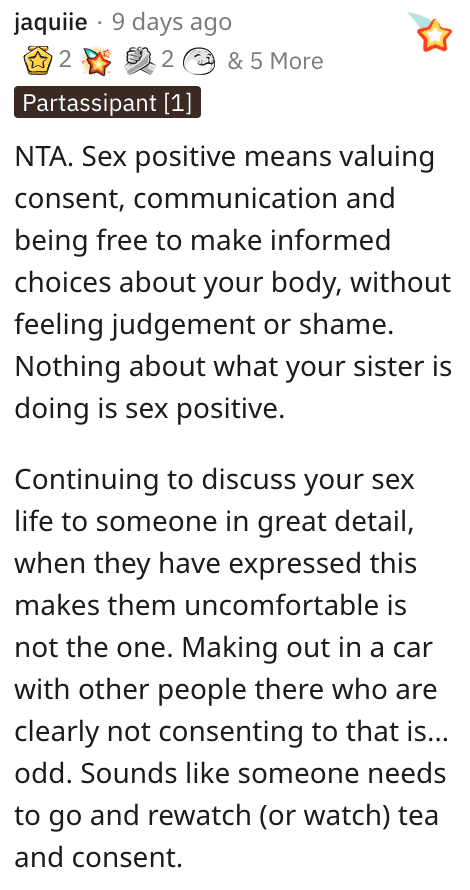 And this Reddit user also said he’s NTA and that his sister was trying to show off. 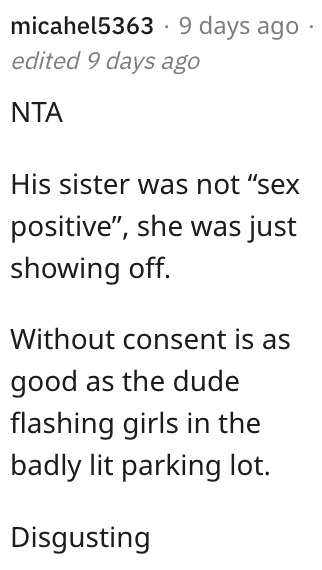