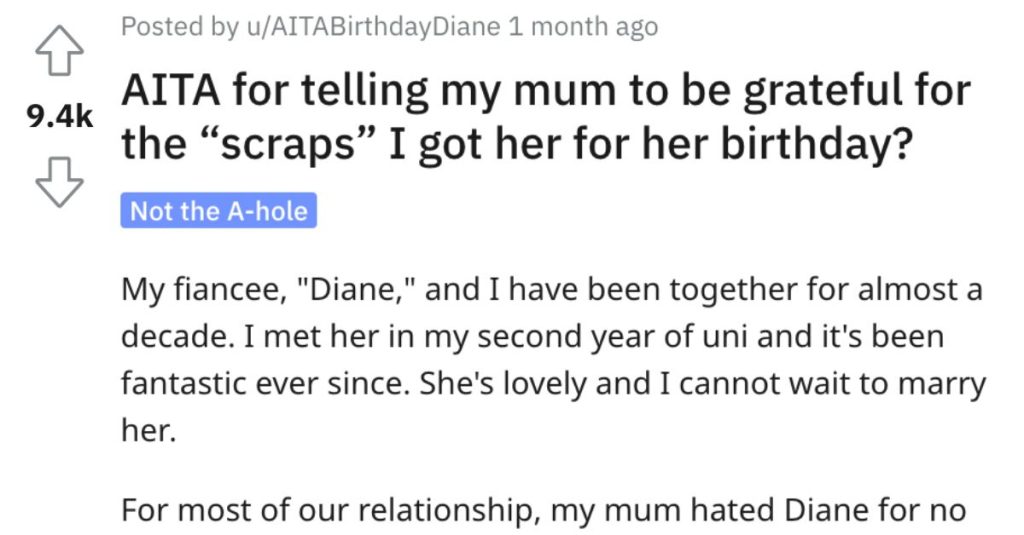 He Told His Mom to Be Grateful for the Scraps She Got for Her Birthday. Was He Wrong?

Even if you know it’s going to cause some hard feelings.

And that, my friends, is the question we’re looking at today: was this guy an a**hole for what he said to his mom?

AITA for telling my mum to be grateful for the “scraps” I got her for her birthday?

“My fiancee, “Diane,” and I have been together for almost a decade. I met her in my second year of uni and it’s been fantastic ever since. She’s lovely and I cannot wait to marry her.

For most of our relationship, my mum h**ed Diane for no reason. My mum would harass my fiancee, call her the most disgusting names, and act like a teenage bully. It got so bad that I stopped speaking to my mum for years because of it.

About two years ago, my mum apologised for treating Diane poorly and wanted to “welcome her into the family.” It was rather unexpected. My mum never explained herself, only apologised for her past actions.

Diane and I have accepted her apology, but my relationship with my mum has never quite been the same. I still keep her at a distance because even if she did apologise, she did cause me a lot of pain.

Diane and my mum share a birthday. It’s not a big deal, but my mum acts as if it is the biggest deal on Earth. She used to turn her birthday into a competition of who “gets the better gift.” It was exhausting and was one of the reasons I stopped talking to her.

Since her apology, her behaviour surrounding her birthday has not been as extreme but still a little passive-agressive.

My mum and Diane’s birthday was a few months ago. We couldn’t celebrate my mum’s birthday the day of, but I took her out for a relaxing spa day and dinner at an upscale restaurant.

For Diane’s birthday, we celebrated with a romantic week in Paris where I proposed. We had an amazing time and I’m so glad I can finally call her my fiancee. Diane is happy and I’m happy.

My mum did not say anything about our proposal but I assumed that she was happy for us, or at least neutral. A few days ago, I got a call from her. She was crying. She was screaming names at me, calling me a terrible son, and wishing me a terrible marriage. My mum told me that she felt “neglected” on her birthday and it was “unfair” that Diane got a romantic vacation and expensive ring while she was left with “scraps.”

I thought that this was ridiculous and I told my mum that she should be grateful for her “scraps” and stop acting like a spoiled child. She did not take kindly to my words and cursed me out more before hanging up. Diane thinks I should have handled the situation with a bit more tact as to avoid causing my mum more emotional distress.”

One reader said he’s NTA and that this situation is ridiculous. 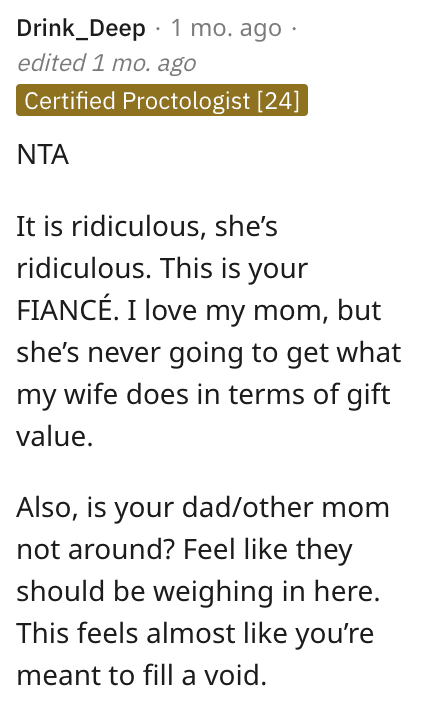 And this individual said his mom is treating him like her husband. 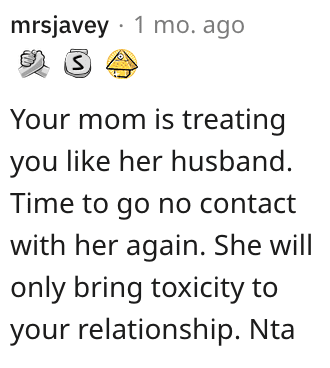 Another Reddit user said that is sounds like his mom is jealous and that she’s handling it poorly. 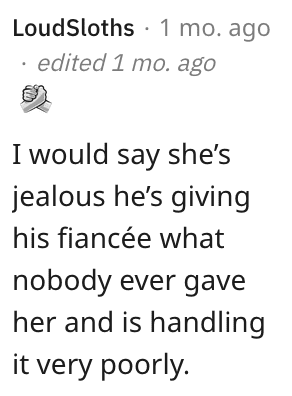