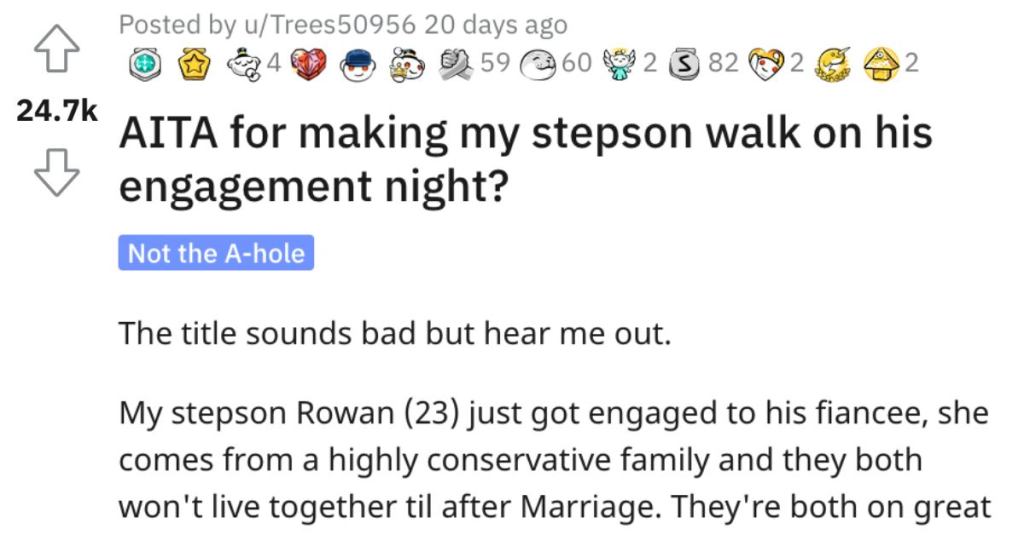 He Made His Stepson Walk On His Engagement Night for Being Inappropriate. Was He Wrong?

Have you ever said that to someone before?

If not, here’s your chance to live vicariously through someone who did do it…to their own son…

Let’s have a look, shall we?

AITA for making my stepson walk on his engagement night?

“The title sounds bad but hear me out.

My stepson Rowan (23) just got engaged to his fiancee, she comes from a highly conservative family and they both won’t live together til after Marriage. They’re both on great terms and I have to say her parents are a bit much.

So the engagement party was held at a restaurant. I drove my wife, Rowan and his best friend Jack there because Rowan’s car needed some work. Things went quite well, party ended and everyone went home.

On the way back, I had to stop by the store so my could grab something for our 16 year old son. Rowan, Jack and I waited in the car. Rowan and Jack kept laughing then this young lady walked towards us cause her car was parked next to mine in the parking lot.

Rowan kept trying to speak to her while she was trying to load her stuff in the car. he and jack kept throwing words at her and she sermed annoyed. Jack then said “hey, he just wants to look at that a**” then Rowan said “Let me see it jiggle, baby”.

I was appalled, I told them both to knock it off but then Rowan satcastically replied “Relax I was just giving her a compliment, bet she don’t get many of those often”. The lady got in her car and I started arguing with him about his behavior and shamed him for acting like this on his own engagement night. He argued back saying something about my car and I lost it.

I told him to get out immediately, Jack got involved so I kicked him out too. My wife got back and started engaging in the argument sayingI can’t let her son walk home from his emgagement party, I replied that her son can’t be harrassing other women on the way back from his engagement party but she kept defending him. I told her to either stay or get in the car. She did and I drove off.

Rowan didn’t come home and my wife gave me hell for it. we later found out that he was staying at one of his guy friends place. From what I understand, he’s p**sed at me and refusing to see me. My wife said it was my fault, I escalated the situation ober some stupid s**t boys his age do all the time.

I told her he can’t do this while in my car but she took it as in I was holding it over his head. She said I should’ve never made him walk the night his engagement and demanded that I apologize to him.

Was I AITA for kicking him and his friend out of the car on his engagement night?”

This reader said that this guy did the right thing. 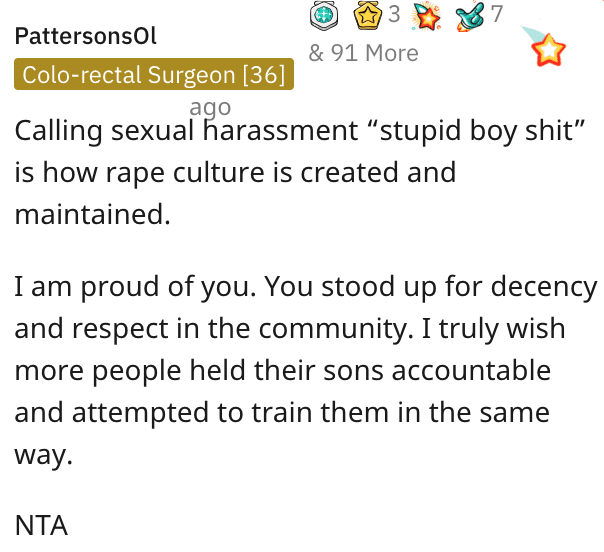 And another individual argued that the guy’s stepson is a lost cause. 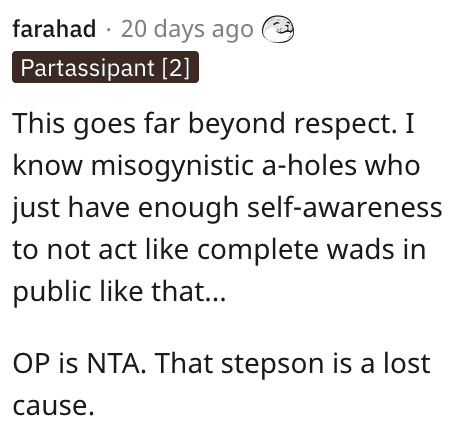 This Reddit user said that this guy would have been an a**hole if he DIDN’T warn her about this behavior. 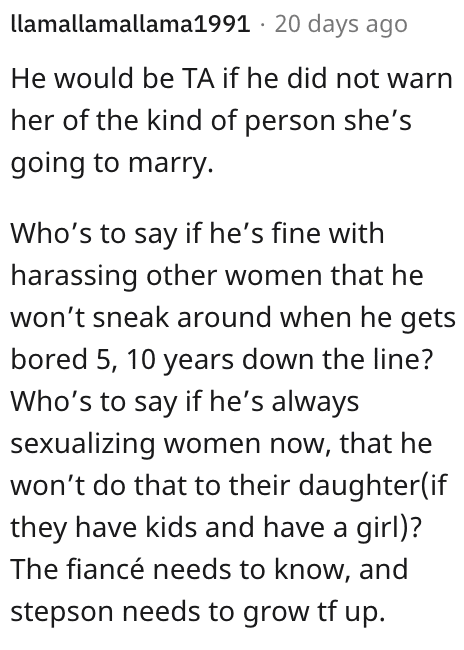