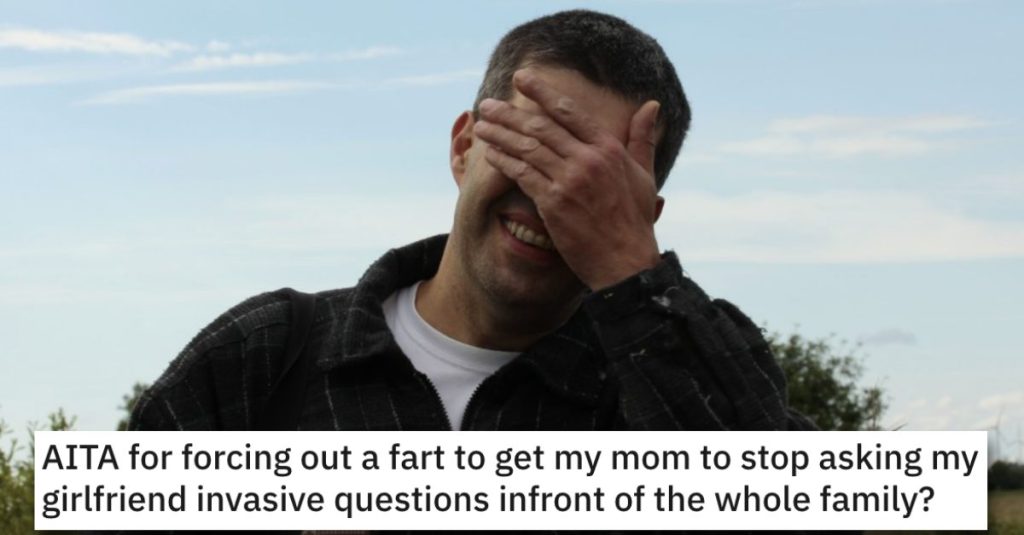 He Passed Gas to Get His Mom to Stop Asking His GF Questions. Was He Out of Line?

But let’s get the whole story before we make a call on this story, okay?

AITA for forcing out a fart to get my mom to stop asking my girlfriend invasive questions in front of the whole family?

“I know what it sounds like but I swear it’s a desperate situation.

So I (23M) have been with my girlfriend (22F) for 7 months. She has a visible scar on her neck and she h**es to be asked about it and h**es to tell.the story behind it (believe it or not I don’t have the story yet but I’m waiting til she’s comfortable to share) She met my family several times and of course…mom and aunts asked her about her scar…like 3-4 times in just a couple of hours, then on dinner, then during movie time. etc.

It got bothersome and my girlfriend would look uncomfortable and I could just tell that the question itself brings her sadness. I told my mom to stop asking such invasive questions about the scar and every time she’d say “okay, won’t ask I promise” but then she would turn around and do it again.

On mother’s day my girlfriend and I attended dinner at mom’s. We where sitting in the living room and my mom goes to ask my girlfriend about the scar again, this time with a bigger audience because the whole family was there. My girlfriend said she’d rather not talk but mom kept cornering her and kept asking her in yes/no form.

I was sitting next to mom and forced a loud fart in an attempt to take pressure and attention away from my girlfriend and get mom to switch her focus to something else. I was like “whoops” and the family started laughing. mom turned to me and gave me a nasty stare. it got awkward ngl but I was desperate and couldn’t really yell at mom to stop and start a fight on mother’s day so I thought of this instead of making a scene.

She pulled me into the kitchen and scolded me for what I did after I admitted that I did it intentionally. She called me childish and said that if I didn’t want her to bring up my girlfriend’s scar then I should’ve said but I did!!!!

I swear like a 100 times. Anyways My girlfriend and I left and my girlfriend couldn’t stop laughing in the car. Unfortunately dad was upset too saying I behaved poorly and childishly in front of the extended family and told me to grow up.

This reader had a very amusing take on this situation. 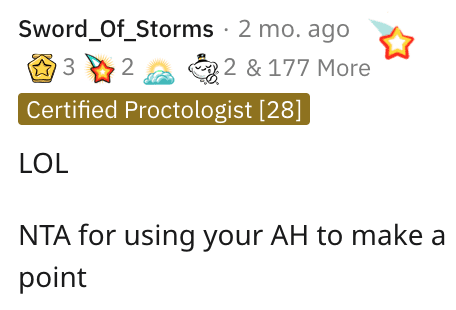 And another Reddit user said a lot of people are joking about what happened but there is a serious issue here. 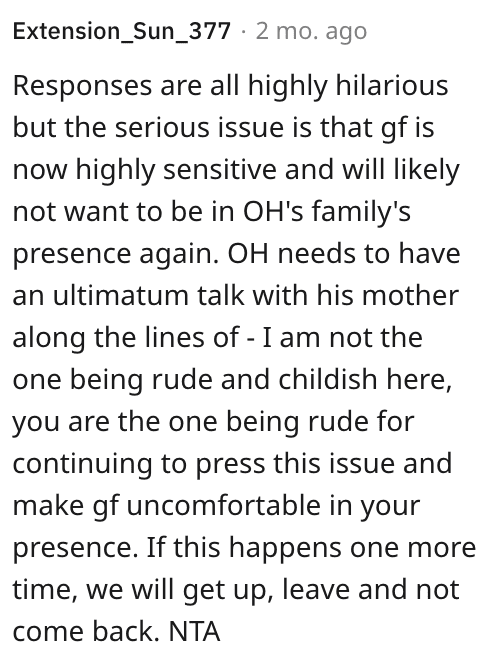 And this individual agreed and said this guy needs to stand up to his family. 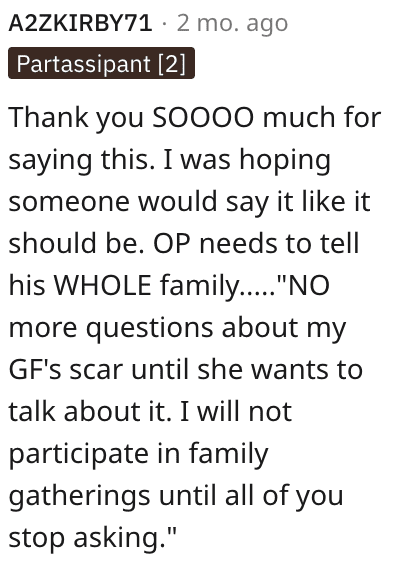