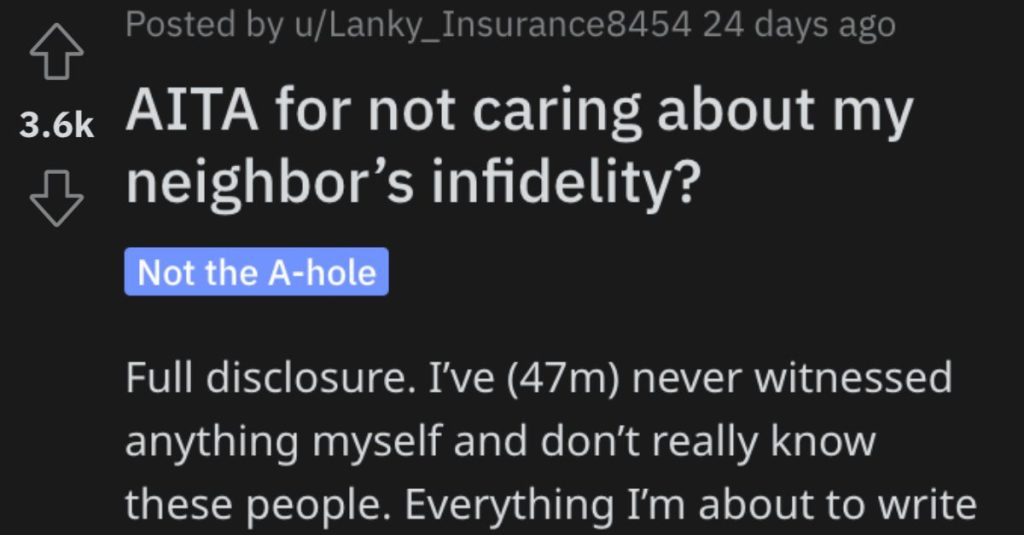 He Said He Doesn’t Care About His Neighbor’s Infidelity. Is He Wrong?

Not my business, I don’t want any part of it!

But is he acting like an a**hole for not caring about his neighbor’s infidelity?

Check out his story and let us know what you think in the comments.

AITA for not caring about my neighbor’s infidelity?

“Full disclosure. I’ve (47m) never witnessed anything myself and don’t really know these people. Everything I’m about to write comes from what my wife (39f) has told me.

This situation is about the neighbors directly across the street. They moved in a couple of years ago and are a young couple. If I had to guess, I think they’re in their early 30s. We wave to each other when we see each other and have said hi a few times but I don’t know their names. I’ll just call them Bob and Susan. Apparently Bob leaves for work earlier and comes home later than Susan.

My wife has a hybrid schedule where she works part of the week at the office and part of it at home. Her home office is in the front of our house and looks directly into the house across the street.

Recently, she’s been telling me that when she works from home, she sees a man visiting the neighbor’s house either after Bob leaves for work or before he comes home. She swears she once saw adult activities between this stranger and Susan because their curtains were open.

At first it was just humorous but as the weeks pass, my wife has gotten more and more agitated with the situation. She wanted me to talk to Bob to tell him what’s going on to which I refused because it’s not our problem and we don’t know if they have an arrangement. Then she started to take pics on her phone to show me the car and the guy.

It was almost a fight to make her delete the pics. Now the agitation has turned into full blown anger at me. Basically she’s mad that I’m not more concern with Susan cheating on Bob. I told her I have our lives to live, I simply don’t care what goes on in their house. This answer angered her so much she slept in the guest bedroom for a couple of nights.

I don’t feel like I’m doing anything wrong by minding my own business but I also slept alone for a couple of nights.”

This reader said he’s NTA…but he needs to clear some things up with his wife.

And this Reddit user said this guy needs to be open and communicate with his wife about what’s going on here.

And this individual said this guy just needs to stay out of it because there are too many unknowns here.