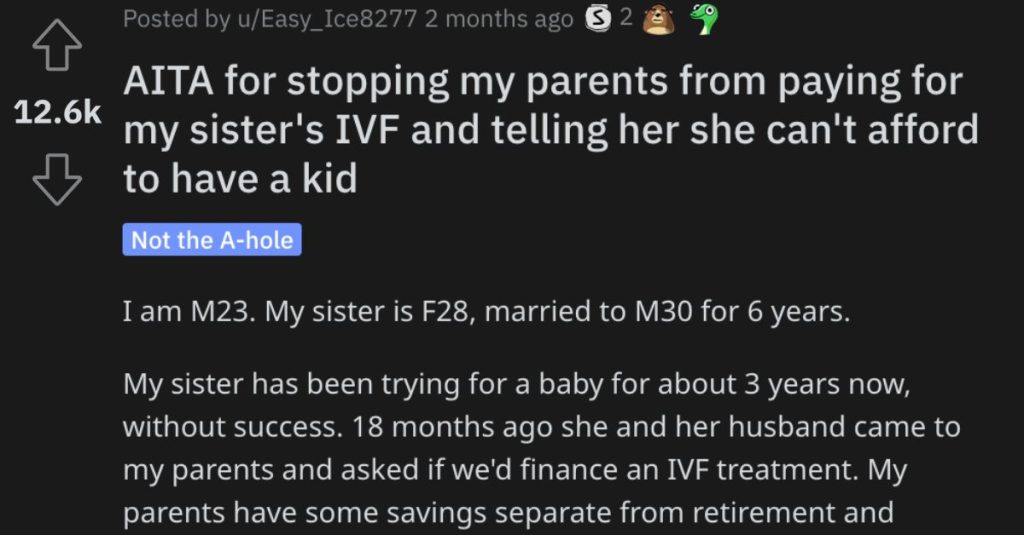 He Stopped His Parents From Paying for His Sister’s IVF Treatment. Was He Wrong?

But sometimes you have to stand up and speak your mind, even if you know it’s going to cause a lot of friction with your family members.

Take a look at this story and see if you think this guy is acting like an a**hole.

AITA for stopping my parents from paying for my sister’s IVF and telling her she can’t afford to have a kid?

My sister has been trying for a baby for about 3 years now, without success. 18 months ago she and her husband came to my parents and asked if we’d finance an IVF treatment. My parents have some savings separate from retirement and agreed to pay for it, and I even pitched in a few hundred dollars to show my support even though I didn’t have a lot of savings, having just started work after graduation.

Unfortunately, the IVF failed. Yesterday, my sister and BIL came over again for dinner. Afterwards my sister said she wanted to try another round of IVF and asked my parents if they would pay for it again. I could tell my parents looked hesitant but they agreed because my sister was crying.

At this point I stood up and said it’s not right for her to ask again for our parents’ money for something that didn’t work before and may not work again. We argued a bit and I admit that things got heated and we had a big fight. She yelled at me that it was none of my business. I told her she if she can’t pay for the IVF then she needs to accept that she can’t afford a kid. She told me to get out, but I refused.

My parents were trying to calm us down, my mom started telling me that it’s not my money, to which I replied that it’s basically a gift to one child and not the other and that it was only fair that I be given a similar amount of money as what they would spend on my sister.

My sister started complaining that it’s not a gift, it’s a treatment for a medical condition and if I’d expect payment if she had cancer and my parents paid for chemo. I told her not being able to have a kid poses no threat to her life the way cancer does and it’s a completely disingenuous comparison.

My dad finally stood up and yelled at us both to shut up and sit down. Then he told my sister that they already paid for one and I had a point that continuing to pay for it would be unfair. He said he’s very sorry for what she’s going through but they need to accept things how they are.

My sister started crying again and her husband (who had been quiet and looking uncomfortable the whole time) took her and left. Today my sister sent me some texts calling me an a**hole for sticking my nose in her business and keeping her from having a baby.

One person said he’s NTA but the way he said this was pretty harsh. 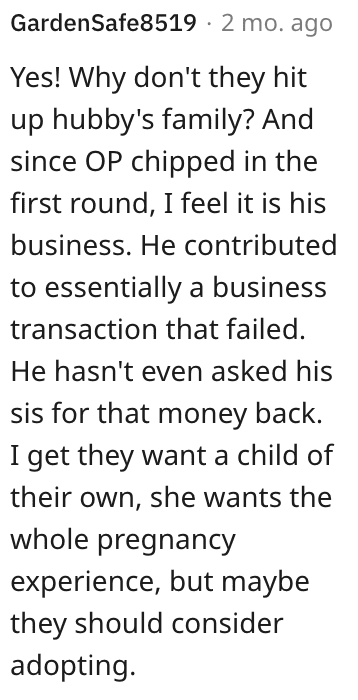 Another individual said this guy is NTA because he got his parents out of this bad situation. 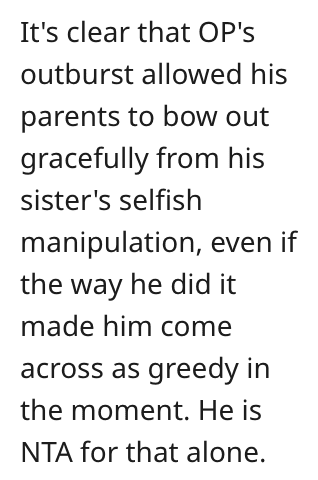