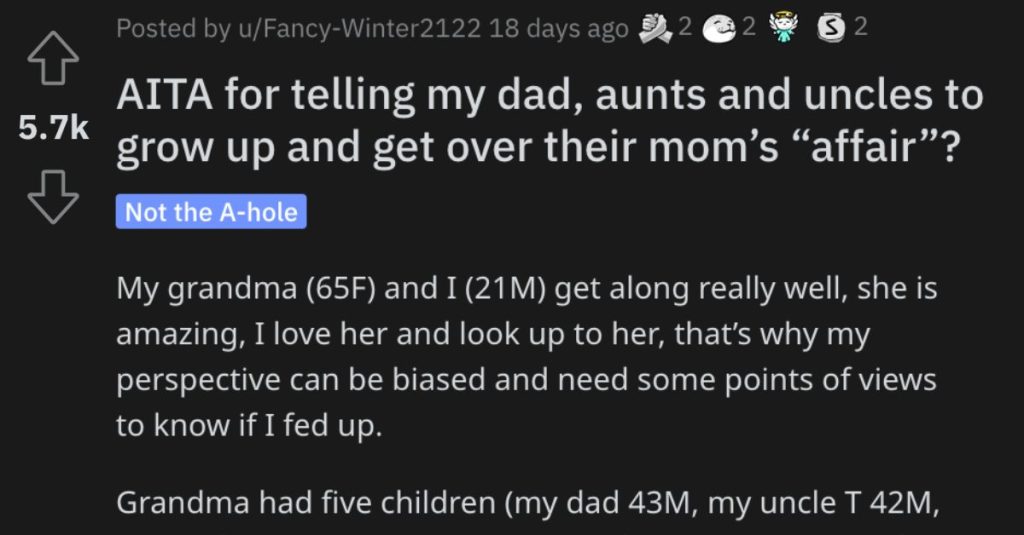 He Told His Family Members to Grow Up and Get Over Their Mom’s “Affair”. Was He Wrong?

Family drama is alive and well, my friends!

And that’s a good thing for those of us who get a kick out of this kind of stuff…from a distance when it’s not happening to us, of course…

Yeah, I guess it kinda is…

But you’re here, too, so get off your high horse!

Take a look at this story and let us know what you think in the comments!

AITA for telling my dad, aunts and uncles to grow up and get over their mom’s “affair”?

“My grandma (65F) and I (21M) get along really well, she is amazing, I love her and look up to her, that’s why my perspective can be biased and need some points of views to know if I fed up.

Grandma had five children (my dad 43M, my uncle T 42M, My uncle M 35M, My aunt F 47F and My aunt S 30F) with grandpa (66M). Grandpa was a terrible father and a garbage husband, an alcoholic who spent all his money on liquor, never supported grandma while she worked her a** off to provide for her kids as a baker, she got tired of it and kicked him out in the 90’s, she stayed as single mom and only provider, did he pay child support?

Grandma and Grandpa never divorced since my grandma didn’t believe in it, and she was always a single mother, my grandma started dating William (67M) two years ago, but she didn’t introduce him to her kids because she was afraid of their reaction and I was the only one who knew about the “affair”.

Grandma announced that she was moving to William’s house this past July and everyone was furious and started accusing her of cheating and that she was choosing her affair partner over her own kids, she was even hesitant about moving in with William but I encouraged her because he makes her happy and he is a nice man.

It’s been almost two months and they refuse to talk to her or have low contact with her and that is hurting her, she asked my grandpa for a divorce and he got mad at her and accused her of cheating.

They were talking sh*t about her (they 6 at a family dinner) thus I told them to grow up and stop acting like kids since they are not, I told them that they should be happy about their mom’s happiness because that woman dedicated her life to make life easier for them and it’s so unfair that they sh*t on her while praising my grandpa (who had girlfriends by the way)

They all called me TA for not taking their feelings into consideration and they say that something doesn’t feel right about their mom dating at this age.

They accuse her of cheating but that isn’t cheating, they haven’t been together for around 25 years, my grandpa had couple of gfs (yes, they were mad at him too, but it’s time to grow up)

AITA for telling them to grow up, I think they need to understand that their parents ain’t getting back together (in case they have a hope) and that grandma has a right to be happy, I mean she did her job already without any help.”

This reader said he’s NTA and that these folks are legally separated. 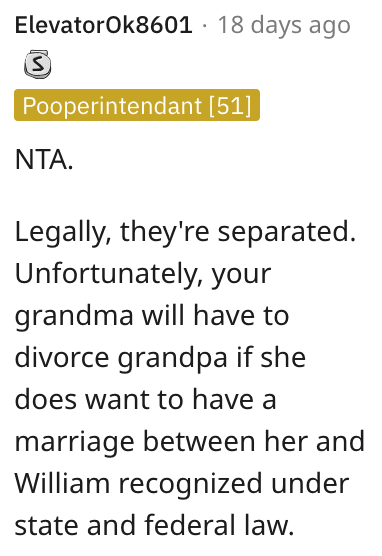 And another individual also said he’s NTA and that his family is acting crazy and selfish. 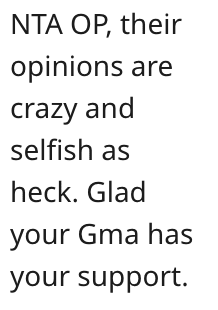