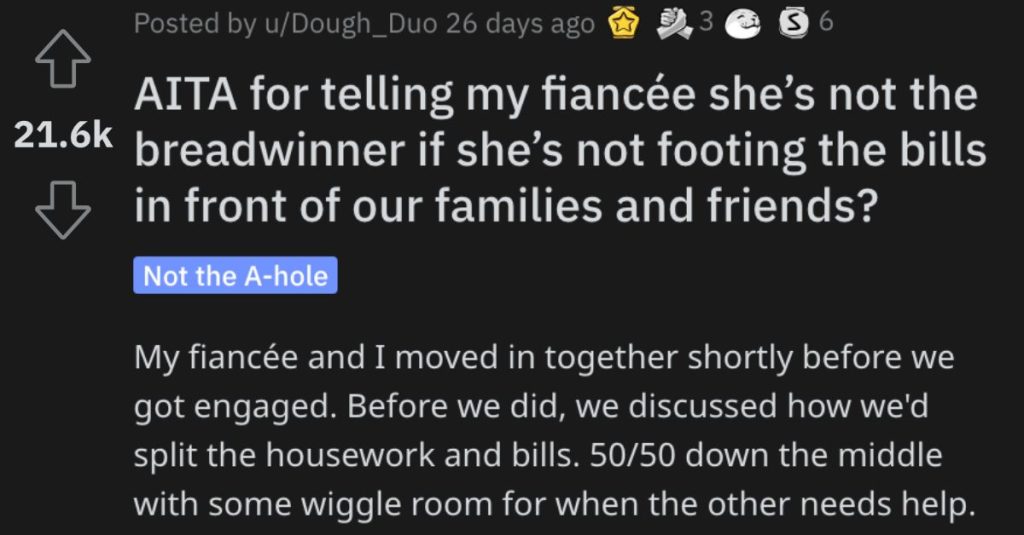 He Told His Fiancée She’s Not the Breadwinner in Front of Family and Friends. Was He Wrong?

It always makes me scratch my head when people lie about how much money they make or they lie about being the big earner in a family.

Because you know that’s going to come back to haunt them at some point, right?

Check out this story from Reddit’s “Am I the A**hole?” page and let us know what you think in the comments.

AITA for telling my fiancée she’s not the breadwinner if she’s not footing the bills in front of our families and friends?

“My fiancée and I moved in together shortly before we got engaged. Before we did, we discussed how we’d split the housework and bills.

50/50 down the middle with some wiggle room for when the other needs help. When we moved, it was into her parents’ 2-story garage that they converted into basically an apartment. They offered a low rent (700 total), and pitch in for the electric and internet so we could save money for our own place and wedding.

My fiancée earns more than me and that’s cool, I’m proud of her. Before we moved in together it always seemed like she was living paycheck to paycheck and I chalked it up to the apartment she had prior having insane high rent.

She stuck to the 50/50 arrangement at first concerning bills but she missed often and I had to remind her about it. Post-engagement, she’s back to living paycheck to paycheck, either missing or very late with her part of the rent monthly, the two utilities we pay, groceries, late with her car payment. Her parents have talked to me multiple times about rent and I’ve covered her missing portion to get us caught up, and then try talking to her.

It always turns into her saying we should just move if her parents are going to hound us. I told her we’re lucky its her parents because anywhere else would’ve kicked our a**es out. On top of that, I pay my own bills, do about 65% housework, arrange and pay for most of our dates and vacations, gifts for her, pay most towards our pets.

I’ve suggested a financial coach but what kicks me is whenever we’re around others, she boasts about being the breadwinner since she earns more. Goes on about the stresses of being the main source of income, all the hours she has to work to “pay all our bills”. I was letting it slide until few days ago we were at a get together.

She and her sister started up again about her being the breadwinner. Her sister said something to the effect of her ex-boyfriend had a hard time being with someone who earned more, and my fiancée went “Good thing OP doesn’t mind me bringing home the pay”.

I told her just because she earns more doesn’t make her the breadwinner when she blows it all on herself and I’m paying most the bills. She’s embarrassed now and keeps saying I made her look bad and got her in trouble with her parents because they want to see what she spends her money on each month, but I don’t think I did anything wrong.

This person said he’s NTA and they need to work on some things before this is going to get better. 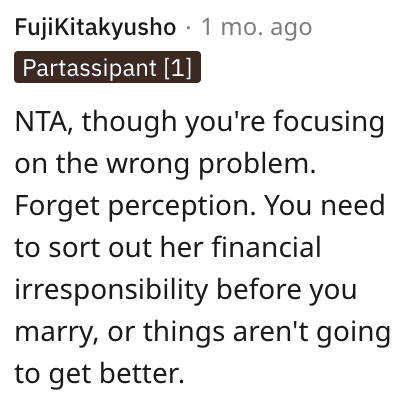 And this Reddit user said he needs to stop paying her half of the rent. 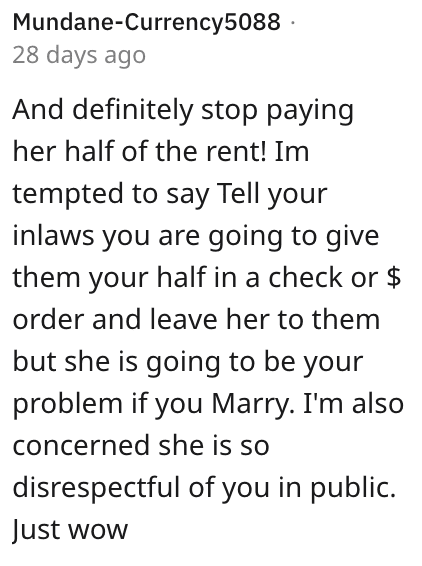 Another individual said that this woman really does not have her act together. 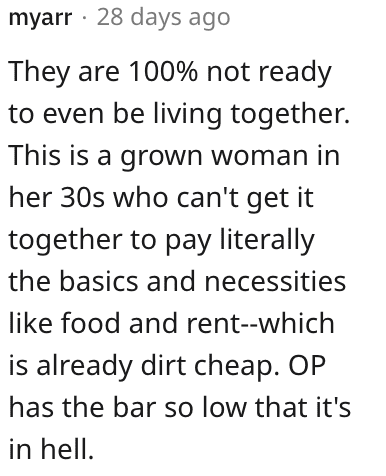