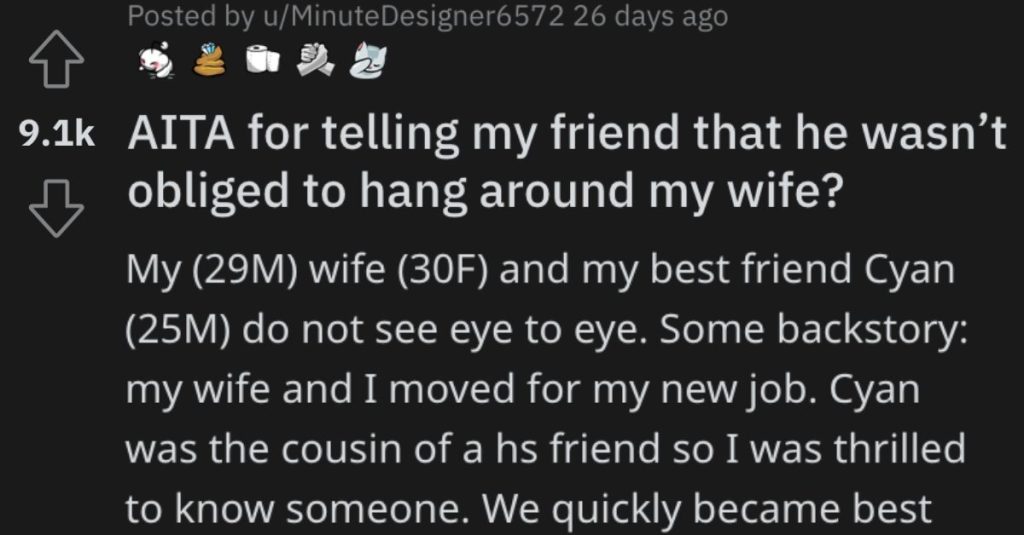 He Told His Friend He Wasn’t Obliged to Hang Around With His Wife. Was He Wrong?

Hey, you don’t have to hang out with my wife if you don’t want to…

Yeah, I feel like that statement could cause someone to react one of two ways…

Either the wife in question will get p**sed off or she’ll be thankful because she didn’t like your friend in the first place.

And that’s where we’re at today in this story from Reddit’s “Am I the A**hole?” page!

AITA for telling my friend that he wasn’t obliged to hang around my wife?

Some backstory: my wife and I moved for my new job. Cyan was the cousin of a hs friend so I was thrilled to know someone. We quickly became best friends, closer than brothers. In covid, our job was in person vs. my wife’s WFH.

Cyan is a very kind person. I think wife h**ed everything about Cyan. She thought he was too goofy and h**ed how he teased her. My wife takes things seriously, and she’s a romantic so things like date nights are a BIG DEAL to her. she h**ed when Cyan hung out even when I invited him.

A few months ago I had a 4 month project across the world. I needed the promotion. My wife ended up needing surgery and she unlike me didn’t make close friends here. her friends/fam were too far. She couldn’t do normal things post surgery and wanted me to come back. I complained to Cyan and he suggested that he pop on over to help her. He ended up doing a lot more and my wife heavily relied on his kindness.

When I came back, it was like my wife flipped her switch. Things that were “immature” became “playful”, she constantly fell for his fish for compliments, and it was like Cyan could do no wrong. Cyan still hung out but it was like he couldn’t snap out of caretaker mode.

The two of them are practically joined at the hip. When I went to work, my wife packs Cyan a lunch too- and his is a lot better than hers or mine. Cyan needs this or that or whatever. She showers him with attention. My wife can be overbearing like that.

At a small party, I came with my wife and she immediately zoomed to Cyan and monopolized all his time. after he went to the bathroom, which was basically the only time she left him alone, I pulled him aside and told him I knew my wife was clingy and it was okay if he kept boundaries. he wasn’t obliged to hang around my wife. I said it kindly. He turned red, told me I was an a**hole, and stormed away. He left without saying goodbye to anybody but my wife.

One person said this guy is an a**hole and he’s jealous. 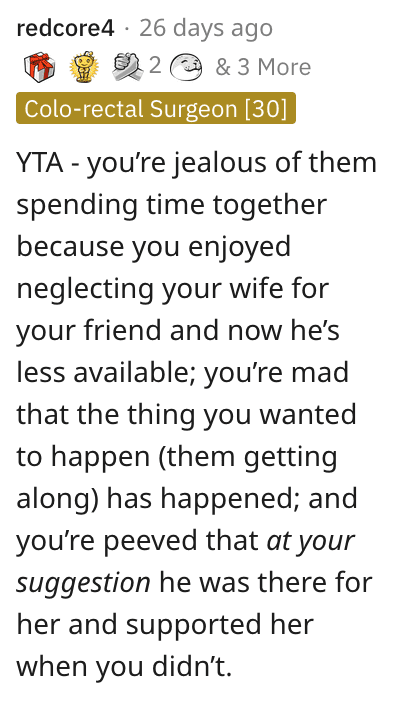 Another individual said this guy is a MASSIVE a**hole. 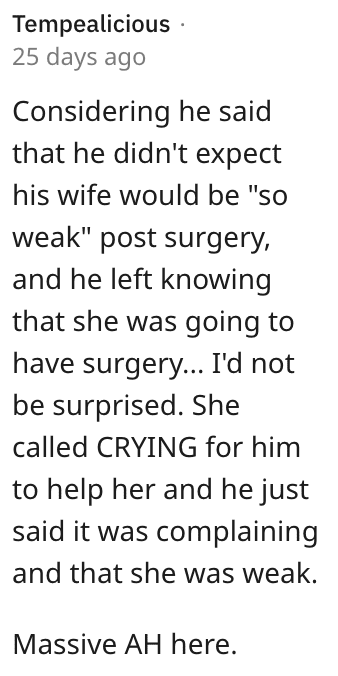 And this Reddit user said his wife and his friend should ditch him and get together.