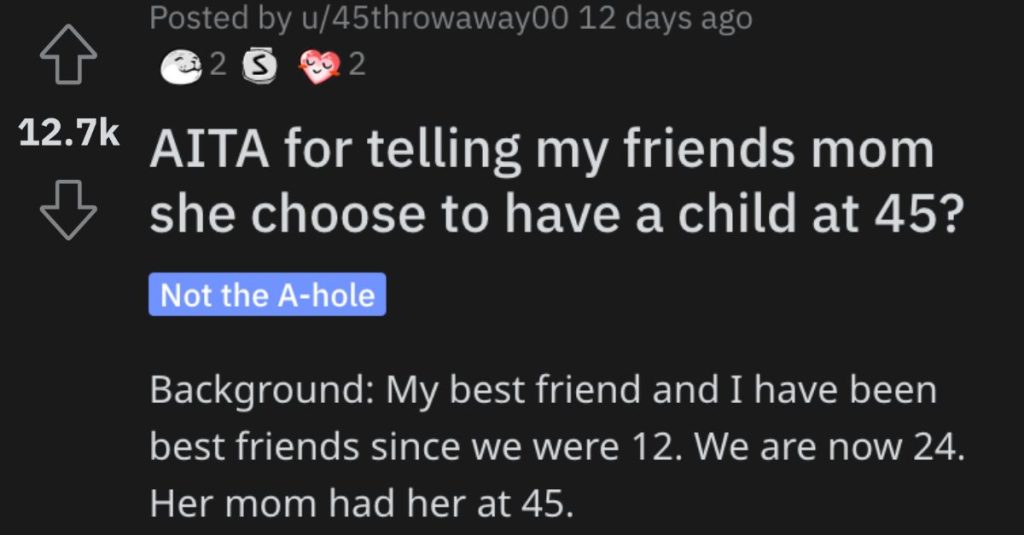 Is She Wrong for Telling a Woman That She Chose to Have a Child When She Was 45? People Responded.

That’s on you, my friend…

Well, technically this woman was telling the truth…but did she act like an a**hole?

Read her story below and let us know what you think in the comments.

AITA for telling my friend’s mom she choose to have a child at 45?

Now before everyone tells me that’s not possible it is absolutely possible for some women. I’m not a f**king scientist but my friend is proof that it can happen. So I don’t want to hear it.

Basically I’m married, we are financially stable, and we decided to have a baby. I got pregnant, and my best friend was overjoyed for us. She loves kids but has been really clear that right now she is enjoying being young and doesn’t want to settle down. She doesn’t see herself having children until her mid 30’s. Of course this is absolutely fine. No judgment.

During my baby shower my best friends mom kept pouting. She kept going on and on about how she is going to be extremely old by the time her daughter has children and she won’t be able to enjoy them. How she just wishes my friend would get pregnant and settle down now.

How it’s not fair to her that she won’t be able to be a grandma. I mean ranting to anyone who would listen. My friend looked really sad. I could tell she was upset. Everyone just looked uncomfortable as she was going on.

After the party when everyone left I talked to my friend about what happened. She admitted to me that her mom has been really hard on her about settling down because of her age. But that she’s just not ready to and she needs her to understand that.

Flash forward to them meeting my baby recently. My best friends mom launches in again. I just said to her “but Christina you made the choice to have a baby at 45. You had to know there was a chance you might be pretty old by the time you became a grandparent. It’s not fair to try and push Alison into a life she isn’t ready for because you want to be a grandparent.”

She got up and left. But my friend thanked me later.

This person said she’s NTA and that she did the right thing. 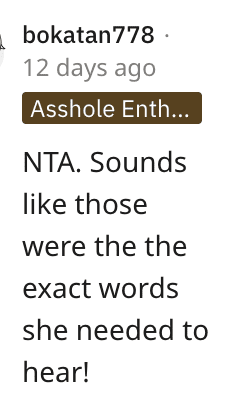 Another individual said she’s NTA and only pointed out the truth.

And this Reddit user also said she’s NTA and she stood up to this woman. 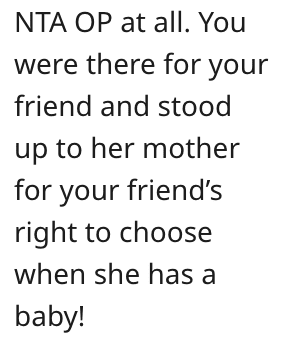