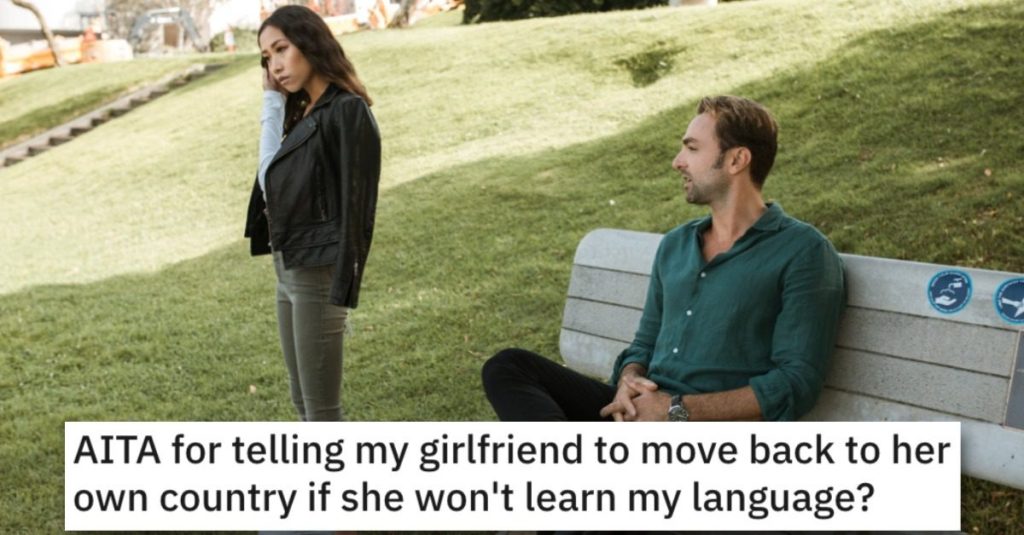 He Told His Girlfriend to Move Back to Her Country if She Won’t Learn His Language. Is He Wrong?

Well, that seems kind of harsh…

I can’t imagine how hard it would be to try to learn a new language in a new country as an adult, but that’s the underlying issue in this story that a man shared on Reddit’s “Am I the A**hole?” page…

Take a look at the story below to see if you think he’s acting like a jerk toward his girlfriend when it comes to their language issues.

AITA for telling my girlfriend to move back to her own country if she won’t learn my language?

“Help me settle this. I’m Dutch (28m) and my girlfriend is Italian (25f). We live in the Netherlands in a city where you can get by even if you speak only English.

She is living here for 5 years, and we are dating for almost 2 years. She speaks no Dutch and makes no effort to learn. Even simple phrases/greetings, she won’t bother with them.

I didn’t really care in the beginning, but as time goes by, I find it strange that someone can live in a place for years and refuse to learn the native language. She says Dutch is difficult, sounds ugly, and she doesn’t need it for her work or social life, so what’s the point? That’s all true, but for some reason it bothers me.

This morning we were talking about where to travel on a holiday, and the topic of language came op. When I suggested showing her a part of the Netherlands that she hasn’t seen, it pi**ed me off when she joked that she wants to go on holiday somewhere she doesn’t have to hear Dutch.

It left a bad taste, so I said let’s talk about this later and tried to end the conversation. That didn’t go as planned. She followed me asking why am I acting like this over a joke, and eventually it turned into a big argument.

She asked me why does it matter when pretty much any Dutch person speaks English anyways, why do I even care? I said how would she like it if I moved to her country and refused to learn her language?

She said, “If Italian sounded ugly like Dutch, then I would get it.” In the heat of the moment I said, “If that’s what you think, then maybe you should move back there.” I don’t really feel that way, I was just angry.

But she said this crossed a line and doesn’t speak to me now. AITA for what I said, and also for being p**sed that she won’t learn my language?”

One person said he’s NTA and he probably needs to find someone more compatible than this woman.

Another Reddit user said that while Dutch may not be a pretty language, this guy is NTA. 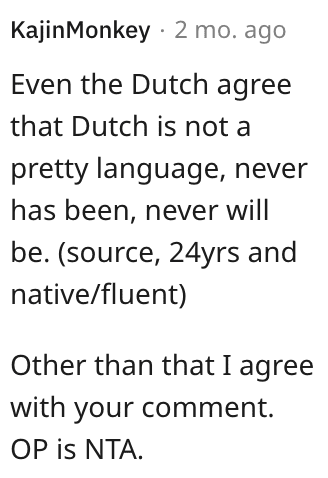 And this reader also said he’s NTA and that it sounds like she’s making no effort to learn the language. 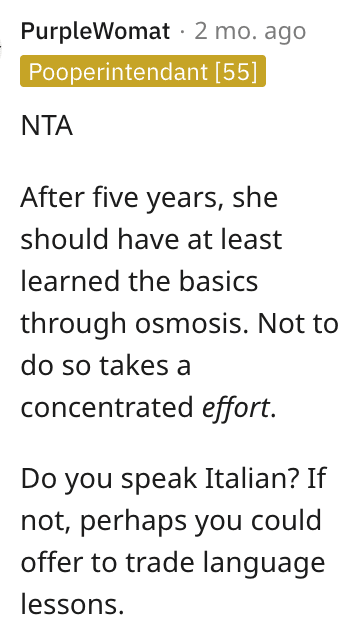