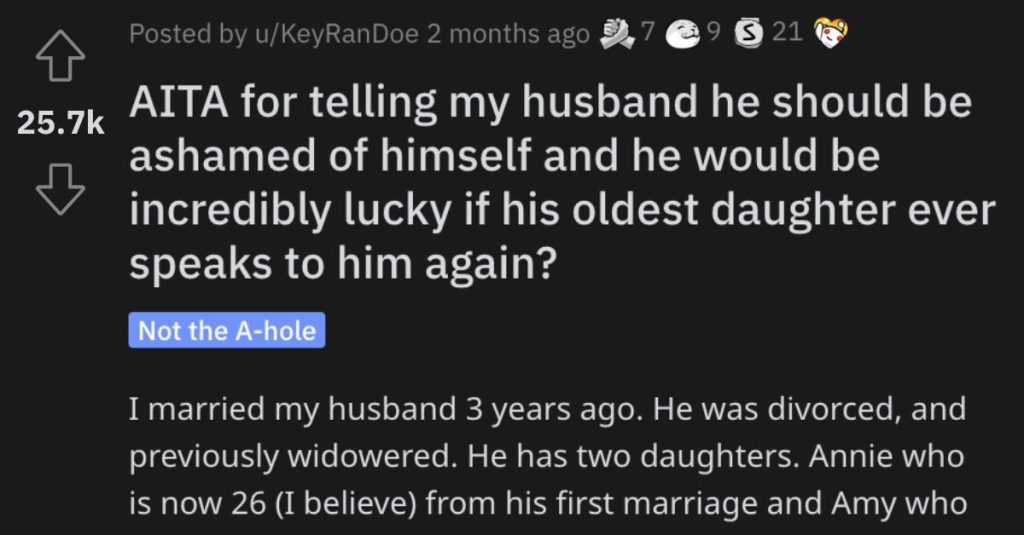 She Told Her Husband He Should Be Ashamed of Himself. Is She Wrong?

Here we go again with yet another story of family drama from the “Am I the A**hole?” page on Reddit.

And this one is a doozy, folks!

Check out the story below and let us know if you think this woman went too far with what she told her husband.

AITA for telling my husband he should be ashamed of himself and he would be incredibly lucky if his oldest daughter ever speaks to him again?

“I married my husband 3 years ago. He was divorced, and previously widowered. He has two daughters. Annie who is now 26 (I believe) from his first marriage and Amy who is 17 from his second.

My husband told me about his late wife, his ex wife, the issues he had as a blended family when he remarried and Annie was not on board with him remarrying and the fact this strain ended his second marriage. He was also honest that Annie never forgave him for remarrying and never wanted anything to do with Amy or him after she turned 18.

What he did not tell me was the MAJOR role he played in all of this. I found this out three weeks ago, at a dinner with his extended family.

The story as I now know it. When Amy was around 5 years old she took a special interest in a necklace that belonged to his late wife. My husband gave the necklace to Amy, which upset Annie, because all her mothers possessions were meant to go to her. My husband told Annie that it was just one item and she needed to get over it because Amy was entitled to have something too.

Annie had brought up that it was the piece her mother wore the most. My husband told her that it was a special gift to give to her sister. That she was being selfish. His ex wife told her that her mother would want “someone as special as your sister” to have a piece of her as well. Annie never got over it. She tried to take it from Amy and was punished. The last time she saw any of them she told them all to go to f**king hell.

Amy still has the necklace too. She has let it get into a bad way, and talks about it as if her dad bought it for her.

I was shocked. I never would have expected my husband to be that way. He was very unapologetic about it and told me Annie would have to get over it some day. I told him he should be ashamed of himself.

That he should have allowed Annie’s mothers possessions to be hers, to do with as SHE chose, that Amy did not give a c**p about his late wife or the significance of those items, but Annie would have. I told him he will be incredibly lucky if his daughter ever speaks to him again and I would not blame her if she never did.

He was furious I judged him. His family said I should take my husbands side over his daughter who I don’t even know (except for the nephew and niece who told the whole story, because they also think my husband did a f**ked up thing).

One person said she’s NTA and that her husband just doesn’t understand. 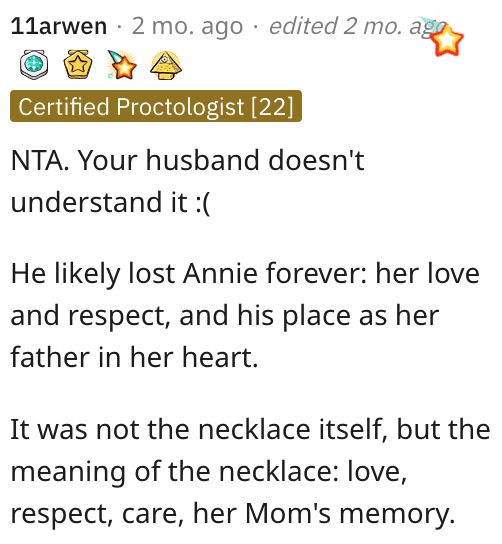 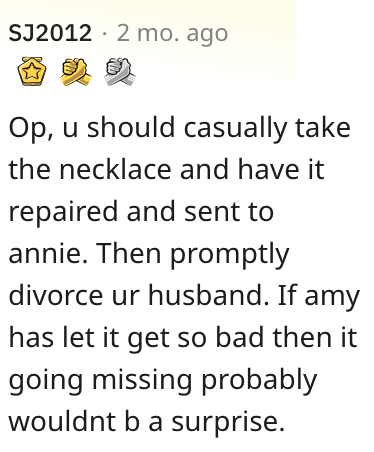 Another reader also offered up some advice…and that includes divorce papers.