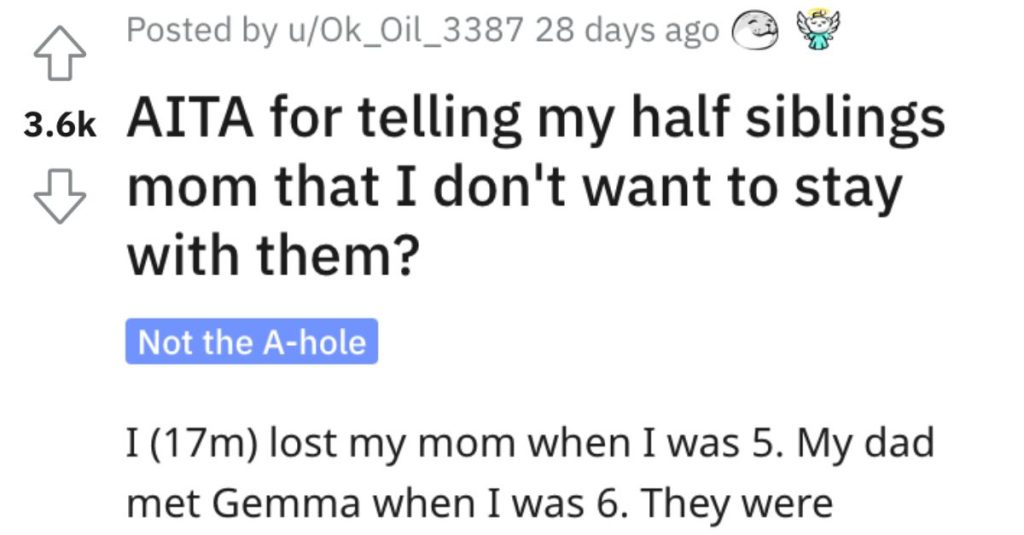 He Told His Half-Siblings’ Mom That He Doesn’t Want to Stay With Them. Is He a Jerk?

Alright, friends, it’s time for another installment of “Am I the A**hole?” from Reddit!

And you better believe that we have a doozy today!

Check out this story from a young man who’s having some serious issues with his family and let us know if you think he’s out of line.

AITA for telling my half siblings’ mom that I don’t want to stay with them?

They had my two half sisters in that time. When my dad d**d, Gemma wanted to keep me, but I wanted to be with my grandparents on my mom’s side. Gemma had never adopted me, though she had wanted to, and my grandparents took the whole thing to court.

Gemma tried to convince me to stay but it was never what I wanted. She was fine, I got along okay with her, but she was never mom. Stepmom, and that was it, but I didn’t feel strongly about that title for her either.

I see my half sisters about once a month still but I don’t have a very big role in their lives. Their mom has no place in my life anymore. She’s engaged to a guy and has his three kids living with them too. She has tried to get me interested in being part of her family but that was never something that I wanted.

My grandparents are older and both have upcoming surgery that means I will be staying with my uncle and aunt for a few weeks. Gemma found out about it through someone she knows and told my grandparents to send me to her house. My grandparents and I had already talked about where I’d rather go and who would take me. My uncle would so that’s what I chose.

We had discussed Gemma and I had said no way did I want to stay with them. In theory I could stay on my own too but they wanted me to have adults around. Plus my uncle and aunt are going to help my grandparents when they get out of the hospital.

Gemma kept calling and pestering and one day I answered my grandpa’s phone, which I have permission to do, when I saw her name and I told her to stop bugging them. She told me she wanted them to let me stay with her family for a while so I could get to know everyone.

I told her I knew what she wanted but I didn’t want to stay with them and that I had made the choice of where to go. Gemma got upset. Asked me why I hadn’t wanted to stay with them. She said she had always hoped the time would come where I would integrate myself back into her family and be her child again. I told her I had never seen her as my parent and had never considered myself her child.

She ended the call saying my dad would have been so disappointed in me. That he had wanted me to stay with her and my half sisters (which I know is true, because he had written that) and would h**e to see me decide living with extended family was more important. I told her it was what I wanted and had no regrets. She called me cruel then.

AITA for what I said to her? Should I have left it alone?”

One person said he’s NTA and he’s made his feelings clear about this. 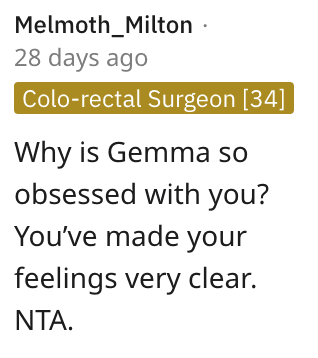 Another Reddit user he’s been clear about his feelings the whole time and this Gemma character needs to go to therapy.

And this individual said what this young man is experiencing is not unconditional love but obsession.